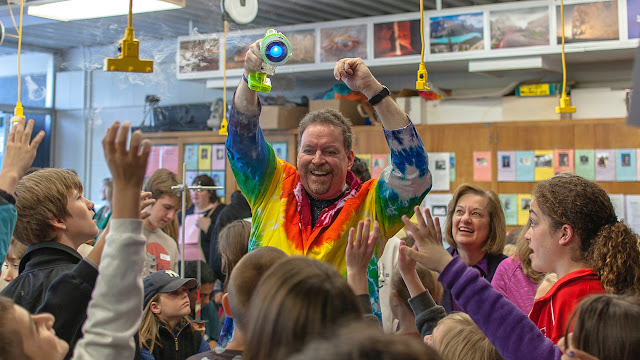 One perspective (and one that is not entirely charitable) is that I'm running off when the going got tough.

I have been very spoiled to have a career that I love with extraordinary passion. One that I've been happy to throw myself into. Quite fully.

Most people work to pay the bills. They don't look to their job hoping to see it as a source of joy. I have bills to pay, too. But it never seemed like that was why I was working. It was; it just didn't seem like it was. And there has been considerable joy.

Remote teaching; distance leaning has made that joy hard to find. I have never worked so hard to be so ineffective. So the job is spiraling into becoming ... a job. The work-a-day bill paying chore set. To paraphrase The Cranberries, "everyone else is doing it, why can't I?"

I can. I'm choosing not to. There is some financial pain involved. I'm making the decision nonetheless. I don't like being thrown off my intended plan, but I was flexible enough to change course in a way that seems like the best course to take given the changed circumstances.

There's always the possibility that I was wrong.

And it seems like a good enough time for Rio to get its fourth physics teacher in its nearly 60 year history. A new instructor will be able to fashion PotU from the ground up. So there's that.

Couldn't you just stay the two years and keep teaching your current course (passing it off as POTU) or some variation of that while helping with the transition?
I hope you all go back to in person instruction (with social distancing) soon. We did it and it's been OK.
Fingers crossed we get the vaccine rolled out to teachers soon. Apparently, in no state are we considered essential workers. :(

I was also planning to teach a few more years but when the retirement incentive was offered I decided to take it. I fell into the same situation in that I could have kept going,figure out how to implement the new PotU, in good faith, but I saw that it would be without any substantial curriculum for several more years. The curriculum would have been created, as you said, "ex nihilo." Best to you in your next endeavor.

Chiara Stella ... I probably could, but it would be dishonest. And that's not a lesson I'm keen to teach by example. I've got an ego the size of Montana, but I'm not going to insist on my vision over the state's vision on the premise that I know better. (That doesn't mean that I don't!)

That said, another part of the genius of my intended 23AndMe plan was that my credential and my Column V salary placement both expire in 2023. I feel like I'm leaving a parking space with time left on the meter. Then again, sometimes that's the smart move.

Dean, I am sorry to hear about this. I was a teacher in California for a very brief period before I moved away. I remember reading over the "Physics of the Earth" curriculum and wonder this: is this course meant to be taught by anyone with a general science credential / certification? In other words, do you need to have a physics credential / certification? (It reminded me of an initiative that other states adopted where physics was really dumbed down and taught in a quarter in courses called "Integrated Science" or "Chem-Phys". This was done so that teachers not certified in physics could still teach this in public schools while giving the students credit towards having taken physics. This is too bad.)

I really like the way you laid out the curriculum you worked on for over 30 years. You never know - it might inspire some of us who teach outside of California or in independent schools?

Will your "phyz.org" physics website still be active and / or accessible to us after you retire?

What a sad-- but completely understandable-- decision you've made.

What a train wreck the whole situation for public education --and for LAB SCIENCE educators specifically-- has been this year. So criminal to be sloughed off because your expertise is too much $$$. Our textbooks were also adopted in 2007 and we too cannot find a decent replacement we feel is worth investing in. As a teacher since 1983 (not at the same school and with time out for a masters and babies) I cannot envision the NGSS mess will clear in the next decade. By then there will be another wagon to hitch to, and likely no support/materials/curricula developed for that one either.

I want to say a profound and sincere thanks to you for all your wonderful curricula that you freely posted and shared with everyone for so many years (good on ya' getting on the TPT train finally!). You saved my sanity more times than I care to recall, particularly when I was thrown into teaching physics for the past five years of my career. I too am contemplating retiring, but while likely do Willie Brown instead. IDK.

Dear goodness: FOUR preps??????? Good heavens! RUN while you can!

Thank you again for your dedication to the craft and the difference you have made in so many lives --that you will never realize!

PS To Unknown: You have no idea how much Dean will be missed and I highly doubt there are many (any?) teachers who will have the stamina to make a 35 year career going forward.

Phyz.org will remain up for the foreseeable. I own the domain and was told (last time I switched web hosts) that as the owner of a four-letter domain I should never let it go! Apparently all such simple domain names have long since been claimed.

I'm certainly glad that I had my own web space rather than relying on my school district to host my stuff. My district has, well, "learned many lessons" on hosting web space for teachers. It has not gone well. Having my own space has been great.