When my students make their crash cushions many of them create paper tubes. This can lead to a successful design or a horrible one. I saved one such simple design and tested it in three different orientations. Depending on the level of your students you could show them this to aid with their own design development.

Posted by Bree Barnett Dreyfuss at 8:27 PM No comments:

Several years ago Dan Burns and I started discussing an engineering project for which students build a crash cushion to investigate momentum and impulse. Using only a few sheets of paper and hot glue student groups design crash cushions (similar to water barrels or guard rails on roadways) to lower the force experienced by a cart rolling down an incline that crashes into them. 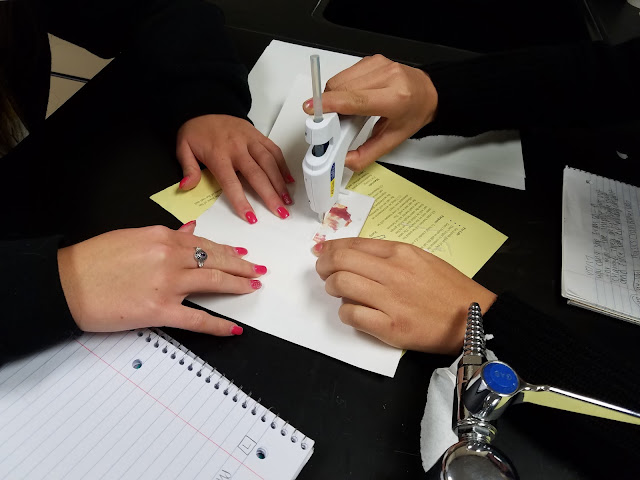 Since then we have both completed the project with classes albeit differently. We also presented at the Summer 2016 AAPT meeting in Sacramento, all of the materials discussed there are here. I wanted to share the project here again, with the tweaks my partner Jon Brix and I have made to it since.

My colleague Matt Miller continued the project in Conceptual Physics this year although opted not to use the Vernier sensor that I had last year.  He opted for the resettable Drop N Tells I bought years ago instead as it is more visual for the younger students. He set up a ramp and used a lightweight impact car that had an additional <200 grams of mass added. Miller adjusted the ramp set-up until the 25, 15, 10 and 5-g sensors were consistently tripping. His students were challenged to design the crash barrier that did not trigger all the sensors. I believe he set the grading up this way:
C = triggering the 15, 10 and 5-g sensors
B = triggering the 10 and 5-g sensors
A = triggering only the 5-g sensor
Extra Credit earned for not triggering any sensors.

Dan uses a PASCO Smart Cart while I use Vernier sensors. The first year I tried this I used a low-g accelerometer because it was what I had. Through a Donors Choose grant I was able to purchase the higher 25-g accelerometer, 3-axis accelerometer and a Wireless Dynamic Sensor System (WDSS). The wired sensors require some coordination to prevent the cord from catching but are workable. I found that the wireless WDSS made for easier set-ups but would disconnect occasionally. Both the WDSS and the 3-axis sensors were almost too accurate and the graphs produced were difficult for students to interpret. I opted this year to use the single-axis 25-g accelerometer because even collecting 500 samples per second the peak accelerations were easier for students to determine.

In the past I've used a wood ramp and a big heavy dynamics cart that then travels along the flat lab bench into a wall. The transition from ramp to flat tabletop caused additional acceleration peaks so we opted to have the cart run directly into the wall from an incline. The heavy cart and steep ramp produced a high acceleration that exceeded the accelerometer's limits. We decreased the ramp angle and still occasionally "missed" the hit because the time of impact of the cart against the wall was so short. This year we opted to use a low-friction (not smart) PASCO cart and track from another colleague. The 120 cm long track was raised above the table by one textbook and pushed against the wall. A box of weights (over 30 lbs) was pushed against the higher end of the track to prevent it from moving. In initial tests the conservation of momentum caused the track to move quite a bit when the cart struck the end of the track.

This year student designs proved very successful. Because of the light cart and small incline students were able to reduce the acceleration of the cart at impact fairly easily. Usually the designs that "failed" did so because the cart passed underneath the crash cushion and still struck the wall. I had only one set-up in the classroom so groups took turns testing their barriers and collecting data. We stored a trial of the cart running into a book at the end of the ramp and then printed out graphs for each group with their trial on top of the control data. Here is an example of the data student's received with the control (green) and their trial (blue): 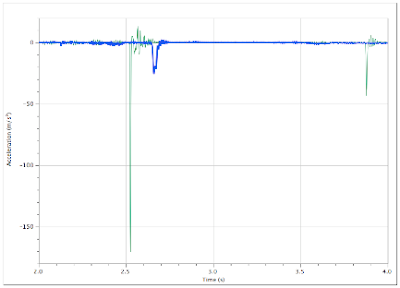 Using this information students were to write a Claim, Evidence, Reasoning (CER) conclusion to answer the question: "Was your crash cushion effective?" After grading these conclusions we realized a few things:
1. Students did not agree on what made a crash cushion effective. Most students realized that decreasing the force, as shown on their graph as a decrease in acceleration, by increasing the time of impact made for a successful crash cushions. A few more realized that stopping the moving cart without letting it bounce back was also good. Yet many students considered their crash cushions ineffective if there was any acceleration, even if they reduced their force by more than 50% .
2. Students do not know what is fact vs. opinion. This must be going around recently. Students often stated opinions or qualitative observations in place of specific measurable data. "Our crash cushion was good because it stopped the cart slowly."
3. Some students did not understand the graph axis, significance of peaks, etc. Referring to the example above, some students incorrectly described the "time of impact" to be just over 2.5 seconds for the control trial. They did not understand or forgot the fact that the cart had to roll down the ramp before the impact.
4. When in doubt, students are prolific. I expected three, maybe 5, sentences from students yet often received a full page. While grading these conclusions I often crossed out over half of what was written because it was superfluous. They seemed to just keep writing and praying for partial credit.

Before handing back their conclusions I reviewed the CER format with students and showed them a few pictures of correctly written (short) examples of their peers. I showed them a few sample graphs from their trials and reviewed the significance of each peak. In the future this will be done the day after to give students a chance to correct their CER conclusions before turning them in. 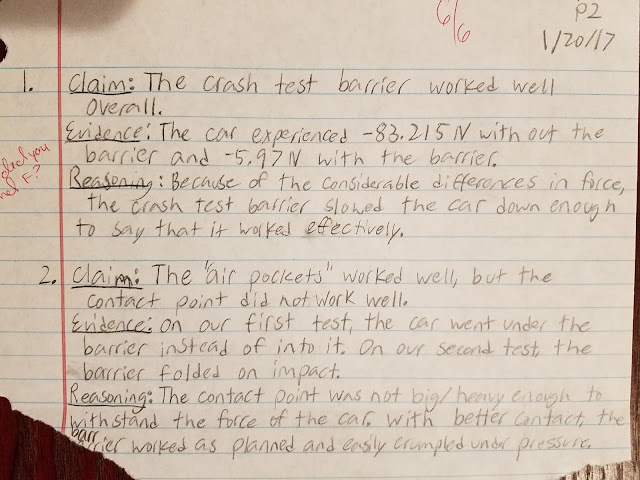 Where the Bolts Are

Exploratorium genius, Paul Doherty, recently shared this gem of a resource. It's a real-time visual representation of lightning all around the world. 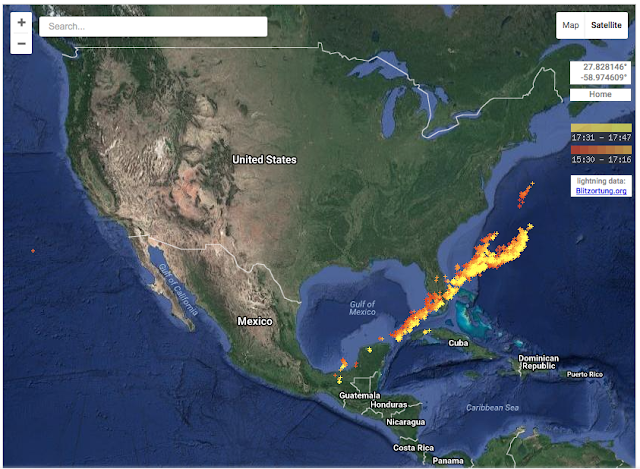 I might very well be the last high school physics teacher teaching the topics of temperature, thermal expansion, heat, and heat transfer. Don't worry, I'll eventually retire and that will be that. (As it is, I've relegated those delicious topics to AP Physics 2, and that course is subject to the whims of enrollment.)

In the meantime, here's a tidbit that I'll be adding this sparking gem of black humor to my convection curriculum.

In my assessment, the flying fairy is a sensitive sensor for air currents in a room. And the fireplace sets up a "negative pressure" by sending heated air up the chimney and drawing air in from the living room. The fairy successfully discovered this air current. Great Success!

The video above went viral a few years ago. And some clever folks produced a satirical follow-up: Fiery Fairy Funeral.

Most people that know me realize I'm a "science nerd," probably more appropriately described as a "science enthusiast." This means I enjoy talking about, reading about and encouraging others to learn about science. Most science teachers I know are enthusiastic enough about their subjects that they randomly insert science into everyday conversations. Sometimes this is greeted with "Hey that's interesting! Thanks for sharing!" type comments. Other times our science related comments are met with awkward science and a change of subject. This happened several times over the holidays and I was struck by how unusual it seemed to be to "talk science."

At both the extended family Christmas Eve and our neighborhood New Years Eve party I shared our plans for a family trip to see the Great American Eclipse next August. It is common when this comes up to have to explain to an otherwise well educated adult what a solar eclipse is and how it happens. At each holiday party I asked kids not "How's school going?" but "What are you learning in science class this year?" When the horn a child was blowing at a party seemed too loud I broke out the decibel meter app on my phone and reminded a mechanic friend to wear hearing protection at work.

My active and conscious support of science for all also presents with gift exchanges. I try to buy science or educational gifts for our family and friends, which I sometimes have to explain after they open it. For instance, this year I gave an Airzooka, a favorite classroom demonstration, to a family member who had received mostly gift cards from the rest of the family. As a young teenage boy he is now "difficult to buy for" and "doesn't want toys." As this video explains the Airzooka pushes a pocket of air that can be felt across the room. As soon as I assembled it for him he began shooting air at others across the room, and soon adults of all ages were stealing it to play with it. They had never seen anything like it, all wanted to know where to buy it and wanted to hear how it worked. Of course I was happy to oblige them and explain the science of it and how I use it to model sound waves in class. Family and friends were surprised how fun the Airzooka and other gifts were since they knew they were science and education related. Somehow labeling them that way came with the assumption that they couldn't be fun or couldn't be for younger kids. We've also given a drinking bird, geodes to crack, a moon night light with lunar phases, a solar robot toy, and more.

Luckily, other friends and families asked what my kids' interests are or if I have any specific ideas for them. They received many science and educational toys this year and I'm happy to report they are loving them all so far. Their Nana gave them Code-A-Pillars which allows them to build a robot caterpillar by connecting segments with different instructions on each. It allows students to practice rudimentary programming and learn sequencing. GG (Great Grandma) got my six-year-old a special viewing planter that allows her to see the plant roots as they develop. And a good family friend obliged when I said she really wanted a toy metal detector and she happily pranced around the yard listening to it ping.

While many science teachers already talk with their friends and family about science or give the gift of science, I'd love to see such practiced by non-scientists as well. A common phrase these days is "We need to normalize [X, Y or Z]." One way to normalize science for all is to talk about it. When someone around you asks "Why did that happen?" or "I wonder if..." discuss it with them, even if you don't know the answer. Encourage the young ones around you to be interested in science, even if they "don't want to be scientists." People like to cook, even if they aren't chefs. They like to go for bike rides even if they don't have professional equipment. I would argue that science can be an interest or a hobby for everyone. All adults can dabble in science without having a degree in science and they can encourage every child around them to do the same. Coloring became a viral sensation and the hobby-du-jour; let's make science the thing to do this year.
Posted by Bree Barnett Dreyfuss at 3:41 PM No comments: