The human eye is not capable of detecting wavelengths much larger than 700 nm. However, digital cameras have the capability to detect near infrared radiation a little beyond 1000 nm in wavelength.  This is almost as large a range in wavelength as the entire visible spectrum! Digital cameras are able to detect this electromagnetic radiation and reveal it as images and movies. This allows many creative and novel ways to explore IR radiation in the classroom and beyond. For example, clothing looks different in near IR as the above Halloween costume reveals. In this post I will give examples of near IR images I have made. In Part 2 I will describe how to make your own inexpensive near IR camera.

There are many things that can be explored with a near IR camera. One of the more surprising things to observe is paper money. The back of $10, $20, and $100 bills have strips of near IR reflecting pigment that obscure the printing behind it.
I remember showing this to a laser physicist and he got so excited he went home and made his own near IR camera, and he worked every day at the National Ignition Facility at LLNL! The patterns are different allowing scanners to quickly and accurately differentiate between denominations as these images of other denominations show.
It is interesting to watch appliances like hotplates, toasters, hairdryers, and a range top burners warming up. These are all easily visible in near IR even when there is no red glow yet detectable to the eye. The range of brightness is much greater than seen in visible. Below is video of me touching a hotplate when it was just warm but glowing in near IR.

Near IR passes through black plastic bags. You can shine an IR LED through it or place IR emitters like this space heater behind it and see right through the bag.
Fluorescent light sources are dimly visible, the warmer ends showing up brighter. Compact fluorescent lights show up brighter than standard fluorescent tubes. Reflected fluorescent light is mostly invisible. A room illuminated by only fluorescent light is dark.
Incandescent lights are very bright and can light up the whole room with near IR. The filament can be seen for a few seconds after they have been turned off. Different color LEDs are interesting. Red shows up brighter than other colors. The red LED has a peak wavelength in the visible but still emits light on either side of this peak, some in the near IR. Most of the near IR from the red and other LEDs is probably from thermal radiation. IR LEDs show up as intense lights. Remote controls have near IR LEDs and can be used as near IR flashlights to “see” objects in an otherwise dark room.
Smoke and dust particles scatter visible light better than near IR. As a result, near IR reveals distant objects that are obscured in visible light.
There was a small wildfire in North Cascades National Park during our trip in July of 2018. I took several photos of the mountains in visible and near IR. This shot of Colonial Peak turned out the best. Notice the extra details visible in near IR and the smoke is less of a problem. The shadows are more stark, showing that near IR does not scatter as much as visible. Trees reflect near IR more than visible, showing up brighter.
The Los Gatos High School pool looked very different in IR. Very little IR is coming from the bottom of the pool so the lane markings on the bottom can't be seen. The sky reflected from the surface looks dark making it look like a senior prank involving ink has been perpetrated. Other reflections off the pool are more visible like the flags and light poles in near IR.
There are many other things to check out, I won't show them all here. LCD monitors show up as a dull glow with nothing showing from the display. Some have a bright corner where the back light is located. Red lasers are absolutely dark unless you shine it directly into the camera. The resulting dim glow is probably thermal radiation. Different items of black clothing that looks identical in visible can have dramatically different shades in near IR. Plants tend to reflect a lot of near IR but this varies by species.

I hope I have piqued your interest in near IR imaging. Near IR cameras can be made by modifying a webcam. All you need to do is replace the IR cut filter with an IR pass filter. Another option is to purchase a Sony Nightshot camera and place a near IR pass filter over the lens. You can find used Nightshot cameras on eBay for less than $40. I will describe both of these options in detail in my next post. If you can't wait, there is a lot already posted on the Internet, search "DIY infrared webcam".
Posted by Dan Burns at 1:54 PM No comments:

Dave Maiullo shows us his smoke ring cannon, adapted to the constraints of the room. Like most things, ring vortices look even better in slow motion.


Bonus: Maiullo Dragon Voice!
Posted by Dean Baird at 12:16 AM No comments:

At the "30 Demos in 60 Minutes" session, Colorado State's Brian Jones—director of The Little Shop of Physics and author of College Physics by Knight, Jones, and Field—showed us his secret to winning a tug-of-war.


I love it: so simple!. Two concerns:

Those once-ubiquitous single-use plastic bags may be an endangered species as voters outlaw them out of concern for the growing plastic islands and gyres in the oceans. It should work equally well with the thicker multiple-use bags that are now coming online.

I wonder if this will work as well on tile as it does on carpet. It clearly works like a charm on carpet. I guess I'll find out soon enough how well it works on tile.
Posted by Dean Baird at 3:42 PM 1 comment:

It is not rare when I spend time with my colleagues at AAPT meetings that I feel like I missed a memo somewhere along the line. If my head is swelling with overconfidence, mixing with my very talented, informed, creative, and knowledgeable colleagues puts me back in my place.

Such was the case when someone casually mentioned the use of Google's Science Journal during AAPTSM18. What? I have a bunch of Google apps, but I hadn't heard of Science Journal. Why not? I don't know. Sometimes I'm just not paying attention.

Anyway, Science Journal accesses sensors built into phones (or as we older folks think of them: smart phones or cell phones) and manages the data for easy use by phone users, such as students. Take a look.

I don't allow phone use in my class. Strictly and absolutely. Unless I invite exceptions. Phones are never far from students' hands. Given a green light, the phones can be out and about in no time. I'm not sure if I'll find a use for this in class. But at least I know it's there. Hmmm... experiment-based homework?
Posted by Dean Baird at 9:04 PM 1 comment:

Rutgers University demonstration specialist, Demo a Day co-author, and That Physics Show star, Dave Maiullo, presented many demonstrations, as he does. With trademark Maiullo panache, of course. One of them was the use of Ikea's Ledberg color-changing LED light strip in conjunction with diffraction ("rainbow") glasses. The LEDs in the strip act as nice point-like sources, a controller allows for variation of the emitted color, and the diffraction gratings produce a nice spectrum that changes in correspondence with the LEDs.

Here's Dave's presentation to a group of physics teachers (Session CM: 30 Demos in 60 Minutes). [Note: this is operationally a family affair as many folks in the room know each other and the demonstrators; so the atmosphere is familiar and casual.] As an attendee, I did my best to capture as much of the session as I could. I did better with some demos than I did with others. My rainbow glasses were secured beyond my ability to deploy them while recording the demo. That didn't stop me from trying!

I managed to make an effort to hold the glasses in front of my big camera during the official demo show. A bit slapdash; I'm delighted it worked as well as it did to show the spectra of the LEDs off to the right. 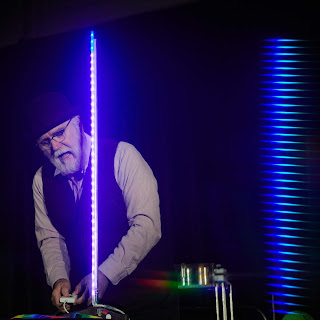 Posted by Dean Baird at 6:43 PM No comments: