In my continued study of (or, erm... playing with) the Casio EX-F1, I sometimes catch a video clip worth keeping. And sharing! Instead of posting them to YouTube (not that there's anything wrong with that), I'm posting them to my dotMac web space. You can access them via

The clips are all in QuickTime format, so get the free player if you don't already have it.

And be patient for the downloads. There are probably ways to optimize the files for rapid download and quick starts. I hope to learn and apply those tricks someday. For now, I was interested in creating the page and linking the files.

Thanks to commenter Marc "Zeke" Kossover for the suggestion of using a colorless soda on the Mentos geyser. For artistic effect, I also shot that clip into the sun (backlit).
Posted by Dean Baird at 4:35 PM 1 comment:

As final exam season rolls around, you may have multiple choice questions on your mind. Some people think such questions are inherently ineffective or downright evil. I disagree. Similar to my assessment of PowerPoint presentations, it's really a matter of quality.

When PowerPoint was an emerging educational technology, I thought such presentations were ineffective and evil. Ineffective because I had never seen one that I thought was effective. Evil because it was a Microsoft product. Then Apple came out with Keynote and people starting thinking about how presentations should be made, and I've since found a place for presentations in my curriculum.

Despite some listserv discussions devoted to the contrary opinion, I think some of the questions used on the STAR Test in Physics (CST) are pretty good.

More fun with the Casio EX-F1. This time we're slowing down a tuning fork. It's a 125-Hz tuning fork, and the camera was set to capture at 1200 frames per second.

Posted by Dean Baird at 4:11 PM No comments:

Hats off to the principal of Rushe Middle School in the doomed state of Florida. A practioner of the Black Arts was given access to schoolchildren, disguised as a substitute teacher.

The wizard conjured the aid of the spirits by performing the "disappearing toothpick" trick in front of the innocents!

The principal caught wind of this Dark Magic and had the wizard fired.

Sleep soundly, Floridians. Your middle school principals are on the job, exposing and firing wizards, and I presume warlocks and witches working in the schools. Your children are safe.

Thanks to the Bad Astronomer for blogcasting this news gem.
Posted by Dean Baird at 5:10 PM 2 comments:

My iTunes overfloweth. It starts with new music from Asia (yes, that "Heat of the Moment" Asia). Phoenix is just the third album from the four original members. And it's a nice update to their 1982 form. Much better than I thought it would be.

It continues with My Someday, the long-awaited full-length album from Blondfire (formerly Astaire). The Brazillian-midwestern, brother-sister duo got under my skin three years when I saw them open for Ivy at Slim's in San Francisco. Only after buying their EP at the show did I learn they were from my hometown of Grand Rapids, Michigan.

And there are new albums from my ancestral homeland of Scotland. The Proclaimers (yes, those "I Would Walk 500 Miles" Proclaimers) have crafted a new set of winning tracks replete with catchy hooks and brotherly harmonies. Life With You is their best work since 2001's Persevere. And celtic supergroup, Capercaillie has delivered a well-produced, groove-intensive disc: Roses and Tears. Karen Matheson's voice never gets old.

But the flood continues with the overdue release of The Weepies' Hideaway. This folk-duo's voices were made to go together, and their guitar work is dreamy. Despite their band name, the new album debuted at #31 on Billboard and was #4 in digital downloads.

Then that NPR scoundrel, Scott Simon, has to go interview one Marié Digby on the release of her debut, Unfold. Apparently she's some sort of "controversial" phenomenon on YouTube. Whatever. But her music was captivating. I went to her corner of the iTunes Music Store and couldn't keep my ears off her.

Tonight I'll see the Cowboy Junkies up in Chico. Monday it's Asia in San Francisco. The week after next it's The Proclaimers and Crowded House in San Francisco. Talk about trying to catch the deluge in a paper cup!
Posted by Dean Baird at 2:59 PM 1 comment:

Email ThisBlogThis!Share to TwitterShare to FacebookShare to Pinterest
Labels: music, off topic

Andy Fraknoi to speak on "Fiction Science" May 16

Thanks to Dan Burns for this heads-up!

"The White House Astrologer, the Roswell UFO, the "Face" on Mars, and a Young Universe: A Skeptical Look at Fiction Science"

Thanks to the popular media, an enormous amount of attention has been given to some pretty amazing claims on the fringes of astronomy. These include the idea that your life path and romantic destiny are determined by the position of objects in the sky at the moment of your birth; that extraterrestrial space-craft have regularly landed on our planet (and kidnapped innocent citizens without being noticed); that an ancient race left us a message on the planet Mars in the shape of a human face; and that the entire cosmos is less than 10,000 years old.

In this illustrated talk, astronomer and popular lecturer Andrew Fraknoi will discuss the most famous "fiction science" claims related to astronomy, and provide the background and analysis needed to appreciate them properly. He will unveil some recent detective work about these cases, and show how there is often a lot LESS to them than initially meets the eye. And he will demonstrate how a few skeptical questions and a bit of careful investigation can often help bring these extra-ordinary cosmic claims down to Earth.

Andrew Fraknoi is the Chair of the Astronomy Department at Foothill College and Senior Educator at the Astronomical Society of the Pacific. He served as the Society's Executive Director for 14 years, and has organized over 20 national workshops on teaching astronomy. Fraknoi is the lead author of "Voyages Through the Universe," which has become one of the leading astronomy textbooks in the country and recently wrote a book for children, "Disney's Wonderful World of Space." He appears regularly on local and national radio explaining scientific developments in everyday language. In 2007, he was selected as the California Professor of the Year by the Carnegie Endowment for Higher Education and won the Gemant Prize of the American Institute of Physics for a lifetime of contributions to combining physics and culture. The International Astronomical Union has named asteroid 4859 Asteroid Fraknoi in recognition of his contributions to the public understanding of astronomy.

Free to 'Friends of the Center for Inquiry' 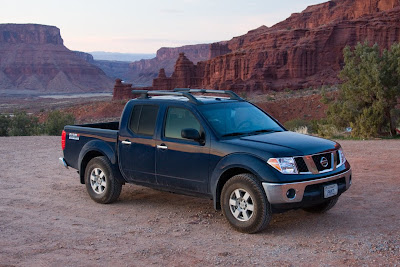 More importantly, I did get the vehicle (in the color of my choice) elsewhere. In time to roll it around town for a few weeks before motoring off for a 3000mi road trip in Utah with my buddy, Rick. The Nismo performed flawlessly on that trip. But that's a topic for another ON post. In the meantime, there's my Nismo posing near Utah's Fisher Towers.
Posted by Dean Baird at 2:14 PM 1 comment: