The day I burned my school down

The most poignant moment of whole the affair was when the alarm sounded and the lights flashed, and everyone in my classroom laughed because they knew why.

We're in the midst of our unit on light. We talk about why we can't see a laser beam between the laser and the dot of light it puts on a distant wall. Then I modify the air in the room so we can see the beam. In the old days, physics teachers used chalk dust as a scattering agent. But chalkboards have been relegated to museums. There was a time when certain physics teachers used cigarette smoke. But smoking was long-ago banned from school sites.

What's a physics teacher to do? Several years ago, I came across "professional haze"/"fog in a can" in the Arbor Science catalog. It was a wee bit pricey, and you needed to use quite a bit of it to get the desired effect, but it worked. So for the past several years, that's how we turned my classroom into a laser light show. Eight bright, green laser beams sweeping through a darkened room with "visible air" is a memorable scene.

Unbeknownst to me, a recent fire safety review of the school resulted in some changes on campus. The sensitivity of the smoke detectors was apparently increased. Significantly.

So as soon as I started fogging the room with my professional haze, blammo: klaxons and flashing xenon strobes! School wide. The students broke out in laughter and I had to follow along before sending them to join the rest of the student body out for the fire drill.

I thought I might make it through my entire career without causing a fire drill. I was wrong. Back in 1986--before my 22nd birthday--I actually had an unplanned fire in my classroom, but no detector detected and no alarm sounded. I was about three weeks into the profession (new school, new town, new state, first job) when a lighting ballast burst into flames. I knew where my nearest fire alarm was and I quickly pulled it. Nothing. The fire burned itself out, but it was startling to my very young self.

So many years later, when I set the alarm off unintentionally, all I could do was laugh.
Posted by Dean Baird at 6:52 AM No comments:

AAPT PhysicsBowl answers are up!

Find the very robust PDF answer key here. It will make much more sense if you participated in the 2008 PhysicsBowl competition exam and have the questions for these answers.

Results of the PhysicsBowl competition will be posted May 9.
Posted by Dean Baird at 6:39 AM 1 comment:

And the winner is...

The San Juan Unified School District Physics Adoption Committee met for the last time and rendered its decisions on the textbooks to be used for the next six or seven years.

Physics and Honors Physics. The wisdom in some aspects of San Juan's adoption process is quite finite. Case in point: the title adopted for Physics must also be used for Honors Physics. Every bit as counter-intuitive as many classic physics demonstrations. But we settled on the 2009 edition of Paul Hewitt's Conceptual Physics. I of course could not speak on behalf of this title. But I didn't need to. The book spoke for itself. The new edition has a dynamic range and flexibility that surprises teachers who give it a thorough evaluation.

One school dissented and would prefer to adopt Holt's Physics text. I hope the district will have the wisdom to allow them to.

Some details remain: the selection of some supplemental workbooks and wading through all the ancillaries. But the adoption decisions are in. And both titles are the ones I would have chosen for my own program, so I'm happy with the outcome.

For more info on either textbook, click their cover.
Posted by Dean Baird at 5:50 AM No comments:

NCNAAPT Brentwood pix (and another videoclip) 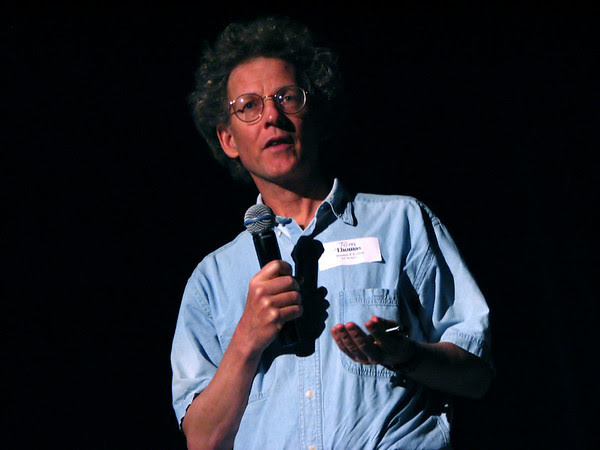 Pictures from the NCNAAPT Spring Meeting at Brentwood's Heritage High School can be found here. For meeting details, see the program.

I also took a quick high speed videoclip of a bouncing water balloon with the very groovy Casio EX-F1.

Posted by Dean Baird at 6:47 AM No comments:

The NCNAAPT Spring Meeting at Brentwood's new Heritage High (Go Patriots!) had more good talks than throngs of attendees. The new school is stunning--more of a community college than a high school!

We happy few physics teachers in attendance had a great time and saw the latest grooviness from Pasco and Vernier. But NorCal physics teachers need to think about what we want from these meetings lest they stop happening.

My wee talk concerned the contents of my Skepticism in the Classroom page and the motivations that led me to create it. The page features quick, ready-to-use lessons in critical thinking that can be dropped into your curriculum throughout the year.

If you're interested in skepticism/critical thinking, I strongly recommend attending The Amaz!ng Meeting (TAM) in Las Vegas. TAM is a four-day conference focusing on science, pseudoscience, psychics, magic, debunking, and related topics, and is sponsored by the James Randi Educational Foundation. This year's TAM6 will include Neil deGrasse Tyson, Mythbuster Adam Savage, "B.S." hosts Penn & Teller, Bad Astronomer Phil Plait, and many, many more.

I attended TAM2 in 2004 and haven't missed one since. It's hard to describe how good this conference is. But once you've been to one, you'll know. TAM6 is June 19-22 at The Flamingo. You get a special rate at The Flamingo if you book reservations by May 16.

I also showed a few clips from the new Casio EX-F1 digital camera. It's a still camera capable of recording high-speed video at 300, 600, and even 1200 frames per second.

Check out the complete water balloon execution video. It's a BIG QuickTime file; please be patient.
Posted by Dean Baird at 7:14 PM 1 comment: