UPDATE: Well, this is a rabbit hole you might enjoy: The New York Times made a Yanny/Laurel slider. Spend some time with it. It harbors surprises that intrigue. Perception is pliable.

It seems to be a matter of utmost international importance that I share this cogent audio demonstration involving the consumptive "Yanny vs. Laurel" debate.

As we age and/or do damage to our ears, it's typically the high-frequency response that goes first, as I understand things.

I hope this brings peace to the many for whom this polemic has harshed an extant calm.
Posted by Dean Baird at 11:04 AM 2 comments:

If you're not subscribed to Dianna Cowern's Physics Girl channel, you should fix that as soon as you can.

She's got a nice episode on polarized light that covers the basics and extends into ... things I didn't know! As Paul Hewitt would say, "Yum!"

Take a look for yourself. If you already knew about human visual sensitivity to polarized light, you're ahead of me. (Not really a high bar, but still...)

Physics Girl: Only some humans can see this type of light


It was so much fun, I wanted to show it in class when I teach polarized light. Of course, I have that condition (?) that compels me to write up a questions set that students complete while they watch the video (and a bonus question for after).

That question sheet can be found at the link below:
YouTube Physics: Only some humans can see this type of light @ TPT
Posted by Dean Baird at 11:24 AM No comments:

As the switch is left closed for a long time the current of the circuit reaches the maximum current as if the inductor was not there at all. If the circuit can be completed without the battery then the inductor will initially produce the same current as before the battery was removed. The current decays over time, therefore the potential difference across the resistor does as well.

When my students were learning about resistor-capacitor circuits I had them use real lab equipment and confirm the potential difference and current equations they had derived. But I did not have inductors to use in a lab for a resistor-inductor circuit. I found this Falstad simulation and it is amazingly powerful. You can make any complex circuit you want! Below is one I mocked up for a homework problem. I screenshot the circuit and added more text to explain it to my students. 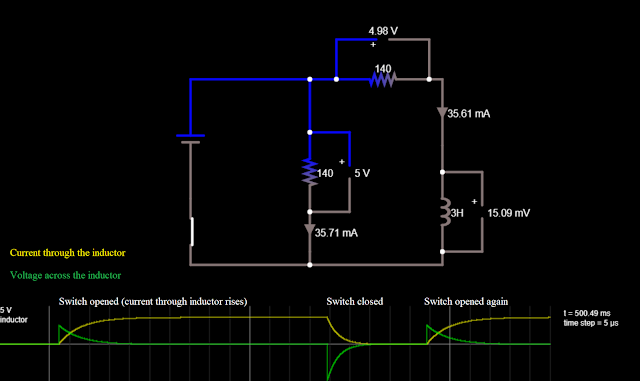 I constructed the circuit I wanted my students to explore and exported a link to the circuit. That is something I plan to do again; I can construct a problem-specific simulation and save that simulation forever as an exported link or screen capture. In the #GraphFails post I shared some terrible excel graphs my students had made. Since they obviously need more Excel practice I also decided to make a portion of this lab an Excel lesson. 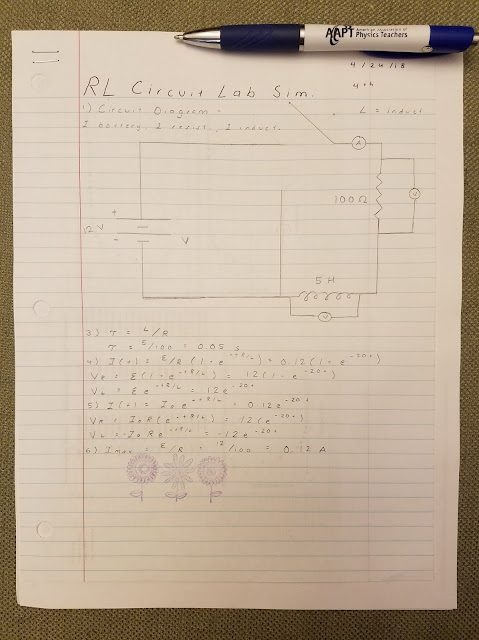 Students started by drawing a Resistor-Inductor circuit and the appropriate meters to measure the potential difference across the inductor, resistor and the current through the circuit. They were to pick any value they wanted for the battery, resistor, and inductor. They used those values to write specific equations for the potential difference across the inductor, resistor and current when the switch is first closed and then as the switch is moved to exclude the battery. They calculated the time constant and maximum current for their circuit.

Students then opened either Excel or Google Sheets to create their data. I taught them how to make a data table and apply simple equations to fill in their data tables. The equations for resistor-inductor circuits were not the easiest thing to learn to type into a spreadsheet so my instructions included a simple method and a more complex one. By graphing their data students were able to confirm that their equations and data were correct if the shape of their graph matched their expectations.

Students learned to label all the parts of their graphs, resize them, change their legend, etc. They printed out their data tables and graphs for both the rise and decay of current. 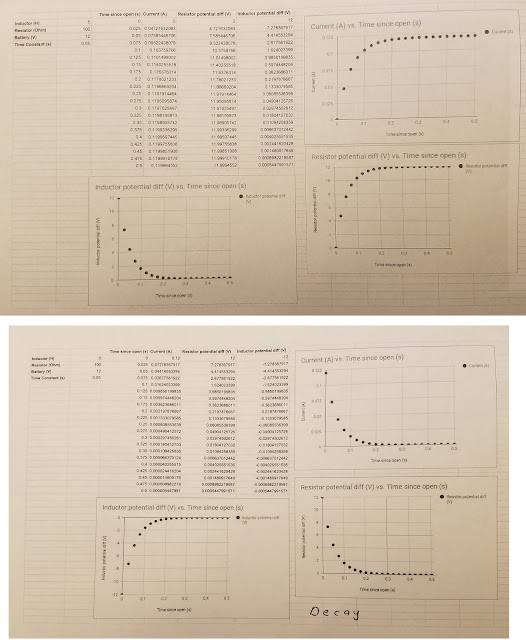 The final step was to follow the link to the Falstad simulation and create their circuit. Since I had set the circuit up students just had to right click on each element to change the values to what they had set up in the beginning of their lab. Students then ran the simulation watching the current rise and then change the switch after it leveled off (after 5 time constants) and decayed. They were able to pause the simulation and doublecheck that their values determined by equations matched the simulations.

Overall I felt like it was a successful lab simulation. Students practiced complex equations, double checked their graph predictions with computations, learned how to use Excel/ Google Sheets to write equations, create multiple graphs and customize them, and created a visual of their personal circuit to see the values change with time. In the future I'd love to get a real resistor-inductor circuit lab going but I think that I would add it to this lab rather than replace it.

Lots of students surprised themselves with their accuracy, some getting too excited, "We have no error!" That was inevitably followed with the slow realization, "Wait, everything was done with equations ... we shouldn't have any error." No, you should not. So when a student did produce a graph that disagreed with their prediction they were able to work it backwards to find out where they had made a mistake. All in all Falstad may be my new favorite electric circuits simulation. Shhhh.... don't tell PhET. ;)