The PhyzMasters of Junipero Serra High

My physics-teaching friend, Eric Plett, is a veteran of our PTSOS program. He's even been able to utilize some of The Book of Phyz curriculum materials in his physics classes.

One of the tangential jokes I sometimes sneak into my PTSOS shtick is that some years ago, some of my students developed a "call sign" ("gang sign") evocative of the "db" symbol placed on a bottom corner of my handouts. Over the years, the "db" hand flash has evolved into a few varieties. The point is to mimic the letters with one's fingers.

Anyway, Mr. Plett recently sent me this photo of his second period class. 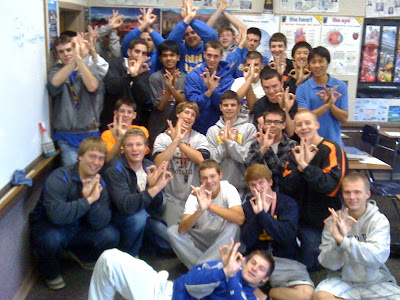 Here's what he told me about the photo:

"At the beginning of the year I explain that we will be using materials from a teacher friend of mine....

They enjoy the humor in your materials.

One of my students said, "There should be a call sign for Dean Baird." I told him that there is and showed him. Since then, the second period class loves to flash the sign. A few of them said they even wanted to do it in their senior photo but the dean wouldn't let  them because he didn't know what it meant.

Here is my second period class. The most enthusiastic of the bunch  (who originally asked about the call sign) is the one lying on the  floor."

It's assuring to know that Serra's dean has good sense. And my ginormous ego will be able eat for a month with a groovy photo like that!

Thanks for the tribute, Padres. Phyz on with your bad selves, and enjoy all of Mr. Plett's crazy demos this year!
Posted by Dean Baird at 1:06 PM 3 comments:

It's a testament to my lack of interest in major league baseball that the latest in big league woo escaped my notice. But when the playoffs started, I foresaw a series I might take an interest in. Texas vs. California (San Francisco).

As I began to watch televised baseball, I was troubled by the thick, ropey nooses that players seemed to be wearing by choice. These baseball necklaces looked bulky and awkward.

Having recently developed a lesson on the fraudulent nature of the Power/Balance bracelet, I knew how this necklace business was going to go if I looked into it.

So I looked into it, and it was everything I expected. The rope necklaces infused with aqua titanium. Wow: aqua titanium. The manufacturer/seller of this snake oil assures us that the titanium solute woven into the rope is a fountain of bio-energetic miracles. It increases circulation, reduces stress, balances bio-energy fields, blah, blah, blah.

There is, of course, no scientific evidence to support any of the claims. I'm pretty sure we were supposed to be so impressed with "aqua titanium" that we wouldn't think to wonder: What's titanium got to do with athletic performance? If titanium is a performance enhancer, should athletes pop titanium pills? Of course not.

Sports writers generally agree that baseball players are among the most superstitious athletes of all. I don't want to say there's an inverse proportionality between intelligence and belief in superstition. Actually, yes I do.

To me, those baseball nooses are idiot ropes. They're a billboard that identifies the wearer as a credulous consumer of worthless woo.

Don't get me wrong. I'm all for California's San Francisco Giants beating the snot out of the Texas Rangers. I love California, and I do not much care for Texas in general (though I do have friends in The Lone Star state).

For anyone to think that an unscrupulously-marketed rope necklace can boost their performance reveals a gullibility I simply can't respect. I know aging athletes are vulnerable to snake oil, and the stakes for MLB players are large. But we've been to the moon. It's time to turn away from superstition and move on to critical thinking and reason.

If you want better performance, train hard and take care of your body. Lose the neck rope and grab a jump rope.
Posted by Dean Baird at 12:30 PM 3 comments:

O Jennifer and Michael, where art thou? 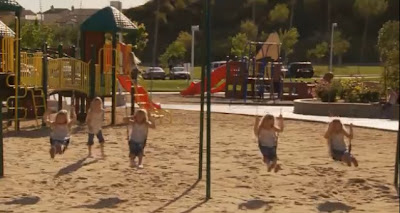 A few months ago, I did something simple yet strange. I compiled a list of the names of all the students I ever taught. Twenty-four years worth of names. Over 3000 in all.

Analysis of the list revealed that the most frequent male and female first names to pass through my classroom were Michael and Jennifer. I don't recall the exact number of Michaels, but I do recall there had been more than 70 Jennifers. Over three Jennifers per year, on average.

I recall once having four Jennifers in a single class. One went by Jennifer, another by Jen; one preferred Jenny and the other was Nif. (And yes, Nif was as charmingly quirky as her chosen moniker would suggest.)

Anyway, this year I am teaching neither a Jennifer nor a Michael. A blip in the continuum, I presume. But I could be wrong. Only time will tell.
Posted by Dean Baird at 2:16 AM 3 comments:

Email ThisBlogThis!Share to TwitterShare to FacebookShare to Pinterest
Labels: getting old, rio students

I'm not sure when you visited last time, so I don't know how much of it is new to you. Best to check them out for yourself.

But I'm pretty sure the lesson on Power/Balance hologram bracelets is new to everyone.
Posted by Dean Baird at 6:32 PM No comments:

Your physics training was difficult and brain-bending at times. But the payoff extends beyond understanding the universe. Gather some friends and play some poker! For money! You're sure to win!!!

Or so they say in this recent piece from NPR. I, for one, am prepared to believe nearly anything Jennifer Ouellette tells me. (And I even knew how to spell her name without checking.)

So get out there and collect some cash. Daddy needs a new cyclotron!
Posted by Dean Baird at 6:24 PM No comments:

Email ThisBlogThis!Share to TwitterShare to FacebookShare to Pinterest
Labels: groovy, off topic

Posted by Dean Baird at 4:31 PM No comments:

I'm really not that teacher. The favorite teacher that all the kids love. The one who knows all the students' names on the first day of school. Who's considered "cool" for being relaxed and understanding about homework, tests, labs, and exams.

I'm not an inflexible British schoolmaster from the 1950s, either. Or a high priest who accepts only the schools top 10% into his demanding, rigorous physics course.

But there are many teachers at my own school who do a better job of connecting with students on an interpersonal level. So I don't usually get anything like a student-delivered cake on my birthday.

But there was apparently some instigation for such a thing this year. And the work looks to have been inspired by the difficult FBD test they took on my birthday. I was out that day. The cake was brought in the following day.

A wonderful treat, and highly unexpected! ("Old Man Baird" is what my buddy, Rick, imagined my students called me about 15 years ago. I've incorporated it into my own classroom schtick. So now my students may well call me that. D-oh!)
Posted by Dean Baird at 4:20 PM 1 comment:

Email ThisBlogThis!Share to TwitterShare to FacebookShare to Pinterest
Labels: getting old, off topic, rio students

The squirrel is a simple creature motivated by two all-consuming drives. One of those drives is to eat. So if there's tasty bird food accessible from atop a pole, you climb the pole and get the tasty bird food.


The human male is a slightly more complex creature. His brain has lobes, and his hands have opposable thumbs. His drives include those of the squirrel, but he also hopes to demonstrate mastery over his domain. If the bird feeder he put in his yard is being attacked by a squirrel, he aims to thwart the squirrel to better serve the birds.


So the man engineers an elegant means to "squirrel-proof" his bird feeder using a simple Slinky. Higher thinking skills vs. basic instinct. Who will win? Watch to find out.