The end of the school year seems to be getting increasingly crunched. I don't know if I'm moving too slowly or testing schedules are mucking up the works or what.

I remember a story on NPR where a noted skyscraper architect said that when trying to design a taller building, you must think not in terms of adding another level to the top, but adding another level to the bottom.
And so I decided that I needed to get to something physics-y sooner than I was. I had a "prelims" unit up first in Physics 1 to accommodate the revolving door of added and dropped students whose count rate is highest the first week and drops with a reasonable half-life until the first 20 days is up. The thought was to forestall the physics until student schedules settled down.
No more. While we still don't get to our first lab until the second week, I compressed the prelims stuff and combined it with my non-month-long unit on motion. That's right: I don't spend a month on motion. More like a week. Motion analysis is applied math. Good fun, and math we do in physics class. But not really physics. The kicker? The entire sky remains aloft; none of it falls!
Anyway, the result is some upheaval in my first and second units of Physics 1 (units 1.01 and 1.02). There will be some pain at phyz.org while the deck chairs get rearranged and appropriately modified. Let me know which links are broken and I will try to fix them. Such a rearrangement is not a trivial matter when there are so many moving parts.
Thank you for your patience!
Posted by Dean Baird at 12:25 AM No comments:

Email ThisBlogThis!Share to TwitterShare to FacebookShare to Pinterest
Labels: Book of Phyz

Congratulations for checking this note! Here are the opportunities:

1. Biggie:
When: Friday 8/19/11 - 2:00pm-4:00pm
Where: Room B-8 (Baird/Physics)
What: Readying the classroom for class on Monday
Extra Credit Rate 36 pts/hr (Triple the normal rate). Definitely worth skipping the afternoon soaps for.
To sign up for this opportunity, simply show up and be ready to work!

2. Smalls
When: Monday during the Link-Crew Training Block
Where: Football Field Air-Rocket Launching
What: Helping to supervise the launching of air-powered rockets
Extra Credit Rate: 12 pts/hr. Earning extra credit during school time? Sweet!
To sign up for this opportunity, send a note with your info to dean@phyz.org.

Results of the Spring 2011 STAR administration were posted today. To see yours, start at the "STAR" page. And navigate to the 2011 Test Results page.

Once there, select your county, district, and school. Leave the test, group, and subgroup alone. Click the on-screen "View Report" button.

Physics results are at or near the bottom of the resulting report.

For additional amusement, start at the beginning and don't select a county. That will show you statewide results. Or pick a county but no district to see how things stand in your county.

You'll be able to access more meaningful results via Data Director, but I forget the steps. I recall only that there are too many, and few are intuitive.

To simplify matters, I usually refer to my score as "P% of N," where P is the sum of the school's advanced and proficient performance while N is the number of test-takers.

The school's physics enrollment was down last year, but those in the class performed at an admirable level.

Our "pass rate" is up while our physics enrollment is uneven and generally decreasing. I understand that our incoming Freshman class is unusually large, so there is hope for the future.

But what of the state? Physics continues to lead among the tested sciences.

The percent of Advanced and Proficient scores stands at 52%, up from last year's pack-leading 49%. The number of physics students earning Advanced or Proficient status has increased by 23% since 2003. No other subject-area test has seen anything close that kind of performance gain. Here's an obligatory Excel graph to show the story of the stats. 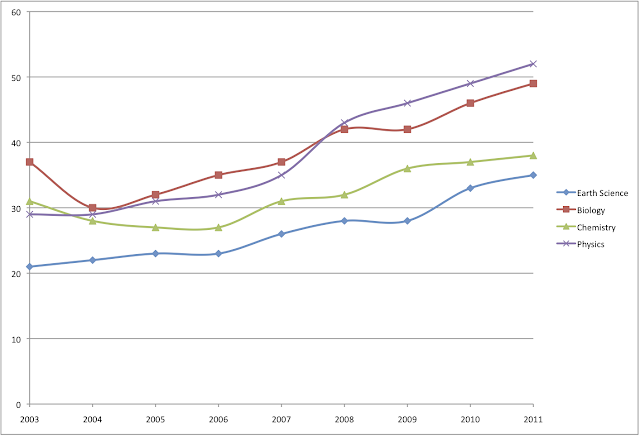 Posted by Dean Baird at 2:56 PM No comments:

This nifty vid keeps popping up in my Facebook feed, and I'm deep in lab book manuscript prep mode, so here you go. If you are either of the two people who haven't seen it, take a look. It's one of Lichtman's best, and it is worthy its "groovy" tag. NPR's Science Friday does it again!

The fact that I've got a big nerdcrush on Flora Lichtman is entirely beside the point. Still though, she is pretty dreamy!
Posted by Dean Baird at 9:21 AM No comments:

Between TAM9 and AAPTSM11, I've been remiss in reporting this great news.

In 2010, Liu was appointed to the Ninth US Circuit Court of Appeals. But Republicans (who loudly decried the use of filibusters against judicial appointments) used a filibuster to prevent a vote on Liu's nomination.

The Federal Court's loss is the California Supreme Court's gain. If any Rio grad has attained a more prestigious position, I am unaware of it. I am proud of Goodwin beyond words.

You can see my previous posts regarding Goodwin's Judicial Journey here.
Posted by Dean Baird at 3:39 PM No comments: