Ball and Ring Caper: did it fail or was it abused?

You make the call!

I tried the Shinco Ring and Ball set recently and found the product to be wanting. But did I push the product beyond reasonable use?

Here's a video of the product failing. It you don't have the Zen to watch all of this, skip ahead to 4:10 on the video's time code (3:30ish on the iPad display).

For comparison, check these snoozefests:

Late Model Win (10 minutes of abuse in the Bunsen burner flame). Ordered circa 2004, to the best of my recollection.

Shinco's ball and ring appear to be plated, which is worrisome to me. Why plate solid brass with... brass plating?

The good folks at Arbor Scientific were unable (so far) to reproduce my results with their supply. They heated the product using a micro burner. Their copy did not melt after 10 minutes of such heating. (Mine didn't last 4 minutes in the Bunsen burner flame.) They also cut into their ring and found it to be solid brass. I don't sense that mine is. I appreciate them taking the time to test things at their end, but I wonder if they're being kinder to Shinco than Shinco is being to them.

Here are a few more pics of the situation.

What do you think? Maybe Shinco sent a bad batch? Arbor's going to send me another set, and I'll put it to the test. I gave some of these out at last year's PTSOS2.

One PTSOSer reports reports his ring went out of round after heating, causing the ball to not fit through at any temperature. Also that the ball fell off its stem upon heating (the threads do appear more "delicate" than "robust".) Mind you, a fallen red-hot metal ball is capable of doing permanent damage to your classroom. Proceed with caution!

In 27 years of teaching high school physics, I've never had a ball or ring melt on me.

The melting point of brass is greater than the temperature of the gas flame. As a matter of classroom practice, both ball and ring need to be able to withstand extended periods of time in the flame. This is a demonstration, and the flow of the lesson requires that the instructor engages the class in discussion while the object is warmed in the flame. Discussions can be shorter or longer. I like to wait until there is a nice orange glow to either ball or ring before proceeding with the various tests involved in the demo.

By the way, here's a PDF of the demo lesson I do with this apparatus. As always, I try to maximize the value of the apparatus through a thoughtful set of questions.

Here's the presentation I use in conjunction with the demo. It's an Interactive QuickTime file (originally designed in Apple's Keynote). QuickTime is free from Apple for Mac OS and Windows.

UPDATE: The replacement Arbor sent out survived 10 minutes in the flame (without melting), so a bad batch may have been the case.
Posted by Dean Baird at 7:17 PM No comments:

Bogged down in grades and lab manual manuscript preparations. So enjoy this gem.

Posted by Dean Baird at 6:53 AM No comments:

In this screencast, Hewitt clarifies the equivalence of m/s^2 and N/kg, and leads to Earth's gravitational field g.

I am done with Mechanics '12

Let this post serve as my annual notice of being done with Mechanics in Physics 1. California 9-12 Physics Standards in Motion & Forces and Conservation of Energy and Momentum are fully covered. We will cover Heat and Thermodynamics before the end of the semester.

PODH, you say? Here ya go: it happened! 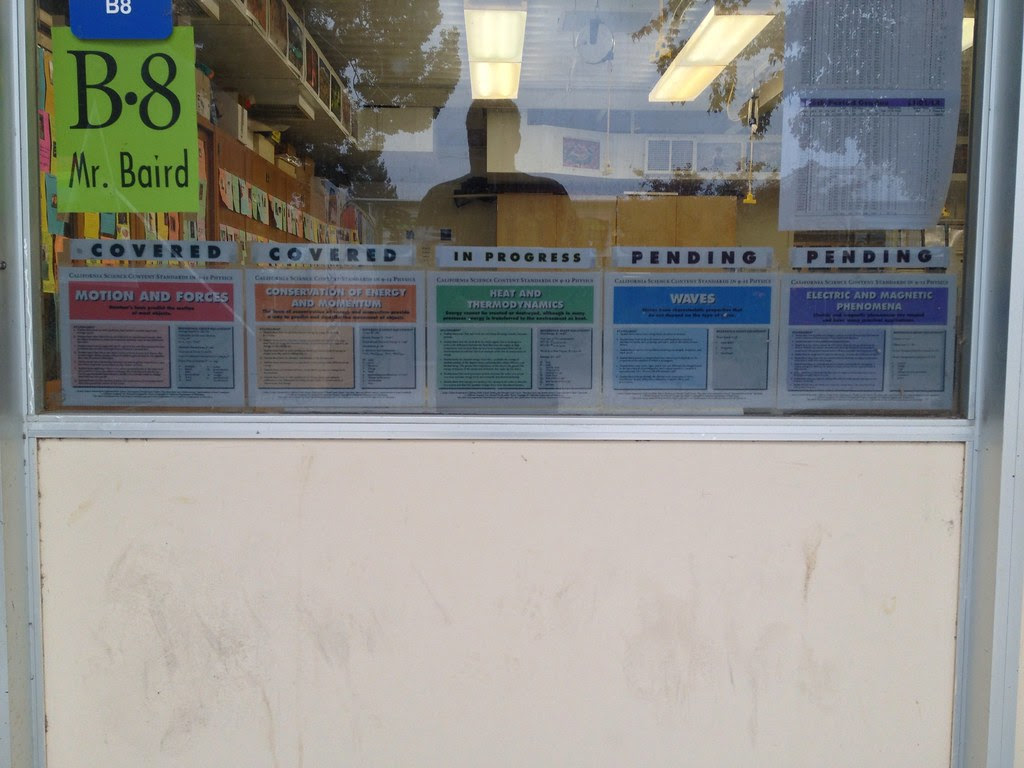 I post this because I agree with Paul Hewitt's assessment that we physics teachers tend to linger in topics such as kinematics far too long. Then run out of time at the end of the year before getting to rainbows and why the sky is blue.

California's 9-12 Physics standards are often regarded as onerous and smothering. Some complain that there's too much stuff to cover in a year.

Standards and Assessment drove a dagger into The Physics Cowboy. An external body decided the content. An outrage!

Too much stuff? Perhaps. But I think it's more, "Too much stuff I don't want to teach and not enough of what I do want to teach." If you say there's too much to cover in a year but opt to teach projectiles (not included in the standards), there's a flaw in your logic.

To do all that and get to rainbows and blue skies, I must now leave Mechanics behind. We have three weeks of instruction (and one week of final exams) between Thanksgiving Break and Winter Break. In that time we will cover the standards in Heat and Thermodynamics.

Second semester opens with Intro to Electricity. Then it's Circuits, followed by Magnetism. Then it's Waves, Light, and Wave Optics. Covering the grooviest topics at the end of the year maintains student engagement in spite of pressures toward "Senioritis" and "Sun's Out, Brains Off".

In this screencast, Paul Hewitt distinguishes between mass and weight in a video from his classroom, then breaks strings attached to a ball in ways that clarify the distinction.

Today and tomorrow only!

Get the full deets at this link: