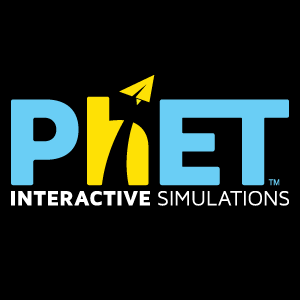 There are some awkward time slots that arise at my school this time of year. We schedule final exams in a semi-staggered manner so that seniors are done with their final exams two days before undeclassmen.

So we have a senior finals schedule and an underclassmen finals schedule. They intersect on one day. Two of the three senior finals days are block days in which morning block senior classes have final exams, but afternoon blocks do not. Add to this the fact that physics and AP Physics are mixed-year classes, and you've got some good times!

One solution to these "empty periods" is classroom cinema. But I don't like that idea so much. Still it's like pulling teeth to get some students engaged in robust, challenging physics work.

This year, I'm going to try the "Conceptual Physics PhET Variety Pack". I put together a collection of PhET-based Tech Labs for Pearson Addison Wesley's Conceptual Physics Laboratory Manual: Activities · Experiments · Demonstrations · Tech Labs. There are some we never got to try in class. So I ran copies of each, and will let students choose which ones they'd like to try. They'll count as lab points toward students' grades.

I posted a page with links to PDFs of the student labs, and to the corresponding PhET simulations.

There are tech labs for every part of Conceptual Physics: Mechanics, Properties of Matter, Heat, Sound, Electricity and Magnetism, Light, and Atomic and Nuclear Physics. And many PhET simulations are leveraged: Moving Man, My Solar System, Masses and Springs, Gas Properties, Electric Field Hockey, John Travoltage, Wave Interference, and Radioactive Dating Game. I'm working on one for The Photoelectric Effect, but I doubt it will see the light of day (!) before the school year is out.

Is that Alice Cooper I see waiting in the wings?
Posted by Dean Baird at 8:00 PM No comments:

I am sometimes accused of expressing OCD-like tendencies. I label lab equipment by group and store apparatus in an organized manner. I don't think I could function otherwise.

And I was a numismatist at an early age. That and philatelism are clear indicators of OCD predilections. I prefer to embrace my OCD rather than to deny it or apologize for it. I think of it instead as a hereditary gift from my grandmother, passed on to me through my mother.

While listening to NPR's Weekend Edition Saturday a few weeks ago, I heard a story about the three American hikers detained in Iran. And the name of the fourth (undetained) hiker jumped out of my radio: Shon Meckfessel. I thought I had had a Shon Meckfessel in my physics class once upon a time. And how many Shon Meckfessels could there be in the world?

I dug around on the interwebs and in my own Excel spreadsheets (used for grading purposes), and found him. Turns out he was also the founding bassist for Sacramento's Cake, but moved on before they got big.

A week earlier, a coworker at Rio recounted a run-in with one of my former students. He presented a perfectly good description, including the first name (Jason), but was disappointed when I couldn't recall the particulars of this student. I pleaded that over the course of my career, I had taught over 3000 students, and fall short of having distinct memories of each of them that I can search with success on short notice.

So I finally made the list. Of the names of every student I've ever taught at Rio. All 3239 of them.

It was mostly a simple task. Copying and pasting lists from my Excel spreadsheets. But some went so far back that they cannot be opened by Excel anymore. That's right Microsoft fans, Excel 200x cannot open Excel 1.x files. Apparently I was supposed to have converted them back in the days of Excel 4.x and am forever hosed since I didn't do so. Microsoft offers no converters/translators. A friend was able to open them using high-tech trickery. But I also did a decent job of picking those names out from an old Tesoro (yearbook).

Now I can say, with a degree of confidence, that I have taught over 30 Jasons. And more than 60 Michaels. Neither of those names challenge the enduring popularity of Jennifer; I've taught more than 70. And what about Mary? I had two my first year ('86-'87), and five ever since. A 10:1 Jennifer to Mary ratio!

Onesies? Aanand, Ragashree, Karthikeyah, Sohini, Goodwin, Jori, and Lonicera, to be sure. But also Allen, Ann, Fred, Hank, Harry, Helen, Hilary, Irene, Janet, Joan, Lynne, Raymond, Seth, and Valerie. (Each name on the first list was flagged by the spell check. None on the second list were.)

When I ask friends/family/colleagues for the most popular family name, they strike out with guesses such as Smith, Jones, and the like. This is true even of those who work at my school! My own sense was correct: the most common family name has been Kim (26). But even Kim is eclipsed if you combine Lee, Li, and Ly (28). Indeed Lee/Li/Ly beats Smith and Jones combined.

Likely just those with OCD.
Posted by Dean Baird at 7:18 AM 2 comments:

It's time for the Redundant Clock

Email ThisBlogThis!Share to TwitterShare to FacebookShare to Pinterest
Labels: groovy, off topic 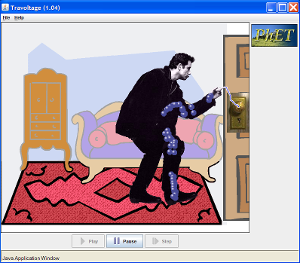 I posted a new activity to PhET's website. It's based on their simulation, John Travoltage. The simulation explores triboelectric charging and spark discharging. The student controls one arm and one leg of an image of John Travolta. Rub his foot on the carpet and move his hand toward the doorknob, and a spark will jump. And John will express a vocal reaction.

Given the nature of the simulation, the title could only be Greased Lightning. The student worksheet and answer key are available for download.

Run it with students if you can work it in. If you like it, nominate it for a Gold Star!
Posted by Dean Baird at 5:06 PM No comments: 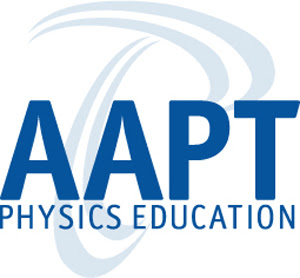 Last year's AAPT Summer Meeting was held in my fair college town of Ann Arbor. I'm not sure what the Committee on Physics in High Schools did to offend the scheduling team, but the committee meeting was held at 7:15am. That's just wrong!

While brainstorming ideas for potential workshops to be run at the 2010 Portland Meeting, I posited one focused on the "weird days" at school: the first day of school, back-to-school night, and open house in particular.

The committee approved it and now I'm on the workshop schedule:
W18: What To Do About the First Day of School & Other Events. (Scroll down to W18.) It will be held Saturday, July 17, 1-5pm somewhere on campus at Portland State University.

I've worked out my own solutions to these potentially problematic special events and will share resources. But I'm also keen to learn of the solutions that others have worked out.

Looks like two physics teachers have already signed up for it. Hurry before the other 30 spaces are taken! Some workshops already have five signups as of this posting.

I'm looking forward to it. I've never hosted an AAPT meeting workshop, and it's always fun to spend time with other physics teachers talkin' shop.
Posted by Dean Baird at 10:40 AM No comments: