The Forces Playlist of Phyz

Where we are with phones in the classroom

Students being distracted by phones at school began registering in the early 2010s. By the late 2010s, the problem was full-blown.

Teachers and administrators were somewhat flat-footed in their response. They didn't understand the depth of the phone addiction epidemic because they hadn't ever suffered from it. That was a mistake.

Amid the generational gap in understanding, teachers were overrun. Many wearied of pleading and admonishing and bribing and punishing students to keep them from using their phones in class.

As in any profession, teachers populate a spectrum of professionalism. And at one end of the spectrum, some teachers were delighted to discover that they could produce a silent classroom of happy students by letting them "phone out" (zone out on their phones). Teacher effort required: zero. A perfect pacifier.

There were also the "treat-em-like-adults" optimists who felt that given free anytime access, 14 year-olds in class would exercise  only use their phones if they truly needed to. They were shocked by the ubiquity of that need.

There were also jerks like me. I never harbored any patience for unauthorized phone use in class. And my authorizations were few and far between. Very few. The "No Phone Zone" policy is displayed and repeatedly announced. But there were always students who were undeterred.

Those students were accustomed to teachers begging and pleading. They'd often make an attempt at discretion by hiding their phone behind books or a backpack on the desk. They were in complete disbelief when I assigned them Saturday school upon their very first phone infraction. But that tended to keep subsequent infractions in check to some extent.

Two years ago I cleared out part of my room to make space for a backpack cubbies. Thirty-two: one for each seating location in the classroom. And I authored an accompanying limerick:

The backpack rack is reasonably effective. But phone addiction is strong among teenagers. And getting stronger. Some keep their phone in a pocket rather than surrendering it to the pack which will lie feet away from them for the duration of the period. And, as mentioned previously, my zero tolerance casts me as an intolerant jerk who just doesn't "get it". Some colleagues would suggest I'm not meeting the students where they are.

In 2019, we have sporadic tales of schoolwide attempts to minimize phone distraction in class. My own school flirted with Pocket Points. It required no expenditure and was simple to defeat. Other schools are trying magnetically locked phone bags. The logistics seem cumbersome and, again, teenagers know how to defeat these measures. The addiction is strong.


There is no research that I'm aware of that touts the benefits of student phone use in class. Research to the contrary doesn't seem hard to find. For example:


France has banned phones from classrooms. I don't foresee this happening anywhere in the US. Because
1. many parents delight in having immediate access to their children throughout the school day.
2. classroom teachers, many of whom have all but surrendered on the phone issue, strive to find positive uses for the phones they know will be up and running during class.
3. administrators fall behind in assigning phone-violation discipline as it is. That only stands to get worse with an all-out ban

I will continue to be a No Phone Zone jerk in my own classroom, allowing phone-friendly colleagues to appear "chill" in comparison. Some will argue that students won't be able to concentrate, anxious from having been separated from their phones.

The threat of gun violence at schools

When I began teaching in 1986, all the doors on my school's sprawling 64-acre campus opened via doorknobs. And those doorknobs locked from the outside. All classrooms open to the great outdoors. We had emergency procedures for fires and earthquakes.

Since Columbine, the doors were retrofitted with exterior pull handles and interior crash bars. The doors can be locked from the inside. Emergency procedures of lockdown and shelter-in-place were added.

In recent years, a predictable pattern has emerged. Whenever an unscheduled lockdown or shelter-in-place occurs (and they are rare), the principal will get messages from concerned parents worried that the school had not taken the threat seriously enough. The verdict of disappointment will be shared, and further drills are scheduled.

We were recently placed on lockdown during our half-hour lunch period. I hustled nearby students (none of whom I knew) into my classroom and locked the room down. I was impressed how quickly the bustling outdoor lunch crowd of 1900+ students cleared into classrooms. The lockdown was eventually downgraded to a shelter in place. An administrator checked my classroom to provide an update.

(We later learned that a proximate shooting threat to a nearby school was made on social media. Nothing came of it other than that the recently expelled student from that school who made the threat was taken into custody in another part of town.)

As far as I could tell, the whole episode went to plan. My room of strangers behaved well and emerged unscathed.

But dissatisfaction was phoned in in the aftermath, so staff underwent additional training, and a followup drill was scheduled.

There is an assumption and expectation that schools (including open-air, indefensible campuses) stand ready to protect students from any attack at any time. No such expectation existed in 1986.

In any case, one thing faculty were warned against was any discussion that would do anything to diminish the fear of a potential mass shooting at the school. Stating the real statistics on mass shootings at school was cast as a no-no.

Don't get me wrong. I believe that the unfettered access to military-grade assault weaponry designed specifically to kill humans on the battlefield is a problem. Mass shootings at schools are a problem. But I'm not keen to put a spin on facts and reality. I listened to this just days after our emergency emergency training session.

On the Media: How to Report on Gun Violence in America


I'm fairly confident that every lockdown incident on campus, no matter how well executed by students and staff, will result in complaints of perceived shortcomings sent in by people who were not present during the incident. This will result in further emergency emergency training sessions and drills.
Posted by Dean Baird at 5:52 PM No comments:

Email ThisBlogThis!Share to TwitterShare to FacebookShare to Pinterest
Labels: off topic, school

If you want a single page with easy-to-find links to every episode of The Mechanical Universe, we have something in common.

I made such a page and posted it to my phyz.org domain.

College (half-hour) episode links are on the top table, High School Adaptations are listed on the bottom table. I arranged the episodes into groups that make sense to me. I hope they make sense to you, too.

I use the high school version with question sets in my classes. Links to the question sets on my Teachers Pay Teachers site, The Lessons of Phyz, can also be found on the page.

With all episodes of The Mechanical Universe (college and high school) streaming for free, I'm moving these video presentations away from class time to "YouTube homework."

Since I couldn't find anyone selling or streaming the high school adaptations of The Mechanical Universe, I posted them, myself. I wrote about that in a previous post.

Here's the page: The Mechanical Universe of Phyz. 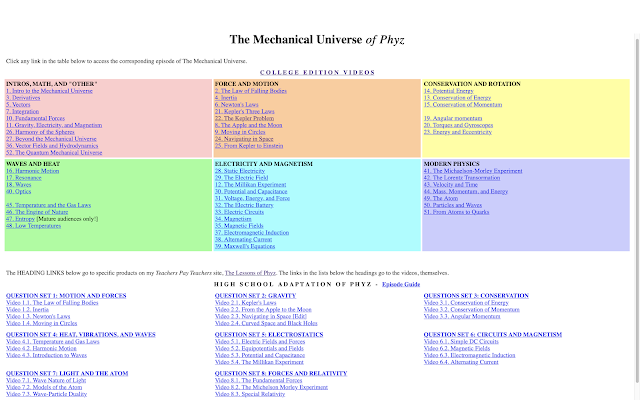 Posted by Dean Baird at 4:03 PM No comments:

The Motion Playlist of Phyz

The long-awaited Motion Playlist of Phyz is now here. Enjoy!

This playlist is long. You might want to break it up into two smaller playlists for better results. Or you could pare it down. You could also add to it; I'm sure I missed a few gems. Please let me know in the comments.

Click the "playlist" label in the column to the right to see the playlists for Waves, Electricity, Magnetism, and Light.