Can you feel the inertia?

I just started rotation in my AP Physics C class and I introduced moment of inertia today. There was the traditional hoop vs disk down a ramp and I found an inertia stick for students to observe. The first class went very poorly because I introduced the rolling inertia demonstrations before we had talked about rotational kinetic energy and rolling ... BUT I did develop a new demo that did work so let's focus on that.

My textbook has a lot of pictures like this one of unusually shaped objects: 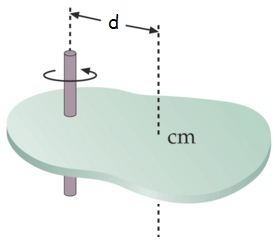 The odd objects are meant to illustrate that the moment of inertia is different with different axis positions. This concept will also help explain the Parallel Axis Theorem if the object is not one of the uniform shapes commonly seen on a moment of inertia chart. I wanted to make something like this with a movable axis so that my students can feel the difference in inertia at different axis points. Its a good thing I have a mini-shop in my prep room ...

I found a scrap piece of 3/4" plywood and used a bandsaw to cut it into an "odd shape." Then I drilled three 1/2" holes through it, one on each end and one roughly at the center of mass. I cut three 8" pieces of 1/2" dowel, one for each hole. The dowel was snug enough that when you rotate it, the whole piece rotates. 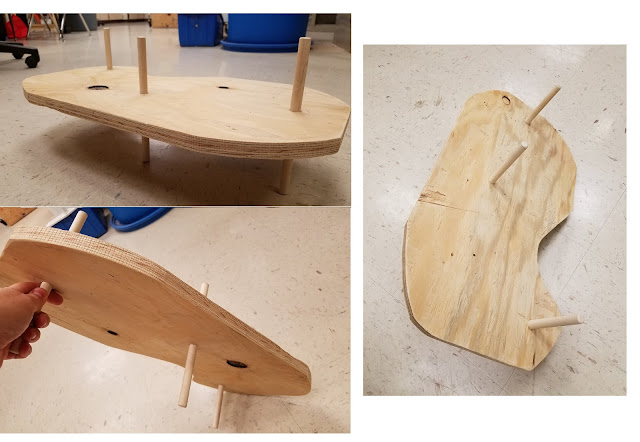 The wood is hefty enough that you really feel a difference from the center axis to one on the end. You can feel a slight difference between the two ends but not as much as I'd like. I may carve out a bit more so that the difference is easier to feel. Below is a video of me spinning it to give you a sense of it.


Posted by Bree Barnett Dreyfuss at 8:10 PM No comments:

After a few year's dalliance with Energy before Momentum, I have switched back to Momentum before Energy. Please don't flame!

One benefit to the return is that our annual egg toss competition, Grass Omelette, has returned to late October/early November. And that increases the likelihood of nice weather.

We conduct the event prior to any discussion on impulse so that we can refer to it during or after our lessons on F∆t = m∆v.

I shoot the catches at 120 fps so that I can pull half-decent still images of "splashes" to give to the individual students who were brave enough to don the plastic ponchos and kilts. I'm currently using a Panasonic Lumix DMC-FZ200. Maybe in the future, I'll shoot normal-speed 4K video to get better stills. At some point, consumer high-speed 4K will be available. I know the Sony RX10 iv can shoot 24 fps at full resolution (as well as 960 fps lower-res high-speed).

When I had 5 sections of Physics (no AP anything and no Conceptual Physics) in 2013, I had enough to produce an amusing compendium set to Vangelis' Chariots of Fire.

I have noticed a big difference in student comprehension when the problems become real to them. Simple visuals can have a big impact on the students "getting it." I can't count the number of times I've tossed a tennis ball around to make a point. Somehow holding the tennis ball at different heights or just tossing it up to catch it again can lead to "Oooh now I see what's happening!" So I have several simple demos that help students visualize their problems, a block or two hanging from the ceiling with spring scales, a stuffed toy in a bucket, etc. 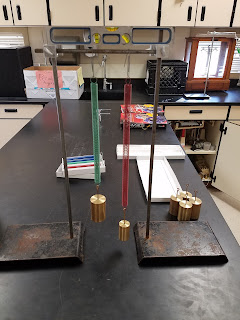 When we studied springs I found a Pasco spring demo set with five springs all of the same length but different spring constants. The first stage was to hang a 20 g mass from the red spring and see it barely settle above the table. I asked students what would happen if I were to hang a 500 g mass then from the green (which they assumed was identical). They were surprised at its shorter elongation and when I asked why they all said "it has a larger spring constant."

For the next stage I set up two large ring stands with another bar clamped horizontally between them. I dramatically assure students it is level with the springs hanging at their relaxed length. Then I hang a 500 g mass from each and they can see the slight differences in elongation. Then the 500 g masses are switched out for 1 kg and the difference between them becomes more pronounced (left). Applying this to Hooke's Law they could all calculate the spring constant for each spring. But this made it way more interesting than five given forces and elongation lengths to calculate the spring constant from a word problem. 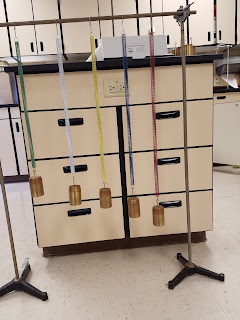 When my AP Physics C class started center of mass, many could calculate the center of mass with equations but had a hard time visualizing what that actually meant. A common problem involves materials of different densities stuck together, for example a piece of aluminum and a piece of iron. To make a real life version I found a piece of Styrofoam that was the same thickness as a piece of scrap wood. I drilled three holes in the wood, stuck three dowels into the holes and stuck the dowels into the Styrofoam. I wrapped the whole thing in paper to make it appear uniform but I did tell students it was made of two different materials. I showed it to students and asked what information they would need to solve for the center of mass. Of course I play with them a bit and after each response I say, "Ok, now you can solve it right?" to which they predictably respond, "No, we need XYZ too!" Eventually, I give them the dimensions of the whole thing and let them solve for it. The dimensions are listed on the paper below (the "total mass" includes the paper in case they ask).

They are not surprised that the center of mass is closer to the wood side but they are surprised that for this particular arrangement it's actually on the wood. It's a simple practice problem but once they're done I can balance the piece on my hand at (almost) the exact position they predicted, about 5 cm in from the wood side. Students that struggle with this homework problem were successful with this in-class practice problem. 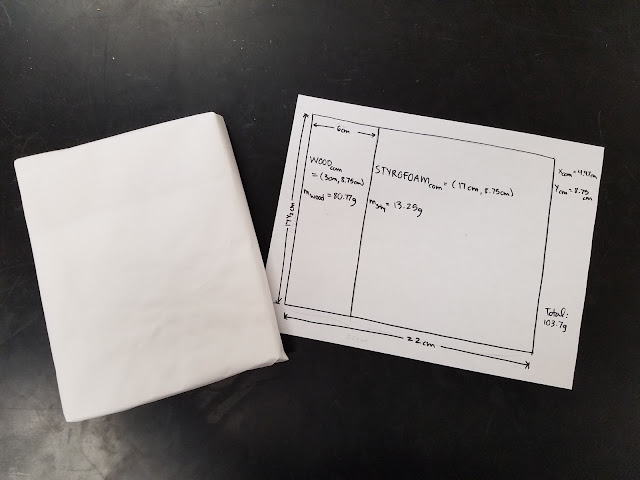 Another simple one my colleague Jessie Chen shared with me can be done by every student in your class on the cheap. Like less than $1 cheap. Most dollar stores sell packs of cards for $1, or even a double pack if you're lucky. Each student will need one plastic playing card (or index card) folded at a right angle along the length of the card. Place it on the corner of the table with one corner hanging off the edge of the table. Place two pennies on the card so that one is on the portion on the table and one is on the portion hanging off the table. You can use a pen or pencil to press on the card so that when it moves it pivots around that point. Flick the vertical part of the card on the side that is hanging off the table. This causes the card to move so that it is no longer supporting the penny hanging off the table and it will fall straight down due to gravity. On the other side the vertical portion of the card will push forward, applying a horizontal velocity to the penny and making it shoot off the table in a half a parabola shape. You can hear (and see) the two pennies hitting the ground at the same time. Many of us have a fancy machine that demos this for us, sometimes called a "Drop/shot" or a Newton's Second Law machine, and those work great, don't get me wrong. But to be able to hand these to my students and have them try it, nothing can be better than that!

Posted by Bree Barnett Dreyfuss at 9:36 PM No comments: