"Challenge Accepted" is the title of their report; IIHS increases the rigors required for vehicles to earn the top ratings. They keep the goalposts moving to compel manufacturers to better protect occupants each year. IIHS hopes that the 57 models that qualified for this initial list will be joined by more models as 2019 moves forward.

Years ago, Griff Jones worked with the IIHS to create the classic, Understanding Car Crashes: It's Basic Physics. It's an excellent capstone for instruction in mechanics. As mentioned in a previous post, I developed a fairly robust single-period lesson around vehicle safety and Jones' video.

It brings the physics home to the students and gets them talking about vehicles they ride in or might aspire to own. I hope the lesson plants a seed that will get them to make vehicle safety and crashworthiness a primary factor when they consider a vehicle purchase.

As a native of Michigan, I was disappointed to see only one American model listed as a Top Safety Pick. Japanese, South Korean, and German makes and models proliferate these lists. I hope US nameplates step up their game, but their track record does not nourish my hope.
Posted by Dean Baird at 5:30 PM No comments:

In the event you've severed all your social media ties, you might have missed this week's viral video. So allow me to present Mark Rober's "magnum opus" as a public service.


Students might—at times—question the value of learning about centripetal force and such. You just never know when you might use it to your advantage.


The notion of delivering a modicum of justice to porch pirates strikes a chord in most of us. I'm confident that simpler solutions cannot be far away. With luck, this project will soon be an amusing tale of "back in the olden days".

Some viewers were skeptical of some of the reactions. Rober confessed to being too aggressive in seeking glitter bomb reaction footage and pulled a few of the clips after determining they were not genuine. I saw one YouTube "skeptic" who seemed a few marbles short of a full deck ranting that the whole enterprise was paid for by Amazon. This guy seemed to be hoping that making a vile video would generate viral video revenue. And no, I'm not going to link to it here.

Of course, one takes some risk slapping back at porch pirates. They cast themselves as sociopaths by their criminal conduct to begin with. And having their poor judgment highlighted to them may not set them on the right path.

Still though, a nice story of using STEM skills to deal with a common, real-world problem. STEM coursework isn't the easiest, but mastery of some of it can make you powerful, indeed.

[Here at The Blog of Phyz, our favorite viral video is still Dan Burns' Gravity Visualized.]
Posted by Dean Baird at 8:32 AM No comments:

This year in my AP Physics C class I did a Rotational Derby Lab, students have no prior knowledge of rotational inertia formulas and observe races between different objects. The original lab I saw required materials I did not have. I asked some other teachers that do it and got a list together of things I had access to. I ended up with enough of some for eight lab groups and some odds and ends to be shared among them. 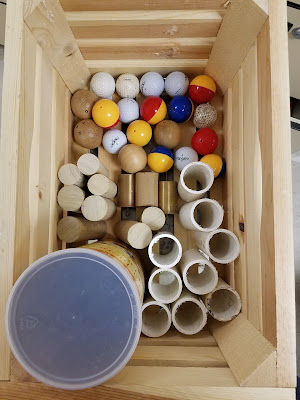 Shared among groups: wood dowels cut the same length and of the same radius as the brass mass, empty oatmeal container, empty paint can, wooden sphere, "sloshy" cans of broth and "nonsloshy" cans of chili.

Students were confused at first at the sheer amount of materials so I made a list on the board for them of everything and added "hollow" or "solid" after each.

"Do we have to write down hollow or solid?" they would ask. I told them they might want to make note of it. Those that didn't ended up adding it later when they realized that information helped them to see patterns in which object "won" the race.

Students were to race two objects at a time down a stack of two whiteboards, releasing them at the same time using a meter stick. Often their predictions were wrong, they usually conducted repeat trials to be sure of their results. There were lots of side experiments going on, racing objects against each other I had not required. (Part of my ulterior motive for having so many objects available to them.)

Their exclamations of frustration or elation would have confused anyone walking by:
"What is with this sloshy can? It always wins!"
"No!!! Tube you were supposed to beat the ping pong ball!"
"Wait .... why the heck did the golfball win?"
"Why did they tie!?"
"No no no do it again, you started the oatmeal before the chili."

I was laughing all day and it was great to see them conducting their own experiments to try and figure out why one won out over another. One student vehemently insists it was voodoo magic.

In one class two groups merged to try and release more materials at once:

Which of course lead to what I wanted to test as well: All the things. At once.

So I grabbed a wooden box I had in the prep room that was wide enough and we set about it. Two students released them all but we found using  two different meter sticks made the release different for the two sides. We used an equivalently long piece of PVC and got the following results:


I took a still from the front video and we ranked the objects as best we could. A grid on this surface could help make it definitive. 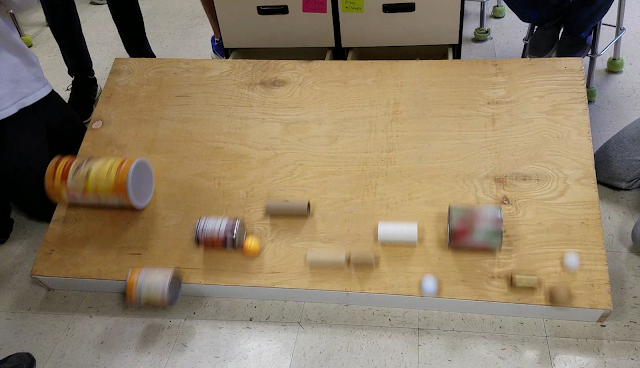 Students had recorded the mass and radius of each object the day they completed the lab. The next day, after learning rotational inertia formulas, they were able to calculated an inertia value for each object. We did not take the different amounts of friction on each object into account but they saw the general trend that the objects with equations that would have higher inertia values if they had the same mass and radius into account were last to the race. The solid objects beat the hollow ones every time; solid objects were #2-5 and hollow cylinders were #9-12. Sloshy vs nonsloshy is a bit more complicated and students don't calculate a rotational inertia value for them. After some information on rotational kinetic energy they realize that the higher rotational inertia an object has, the more energy is going into its rotation and less is going into its translation therefore it will "lose" the race. Applying this idea to the sloshy can students realized that the sloshy contents aren't rotating (much) and therefore that was a lot of mass that was just translating down the ramp. The nonsloshy can however, has a lot of mass to rotate in that can and acts more like a solid cylinder with a lot of rotational energy and less translational kinetic energy than the sloshy can.

The kids really enjoyed the lab and while it was not as accurate as it could be it really helped them to understand what affected an object's rotational inertia and  I think set us up really well for rolling next week. Almost the entire lab fits into three oatmeal containers for storage as well.
Posted by Bree Barnett Dreyfuss at 10:45 AM No comments: