Michio Kaku: not a fan of US science educators

The first time I heard of Dr. Michio Kaku, it was when he was honored with the American Association of Physics Teachers' Klopsteg Memorial Award at the 2008 Summer Meeting in Edmonton. (I received a Distinguished Service Citation at that very same meeting, but the Klopsteg is much higher up on the ceremonial food chain and involves a plenary presentation.)

So it was disappointing when the AAPT honoree's Sacramento Speakers Series talk took an unfortunate turn toward the end. Kaku emphatically and unambiguously slammed American science educators for crushing the inquisitive nature of curious young students, ranking the US science education as the worst in the world. (Something tells me he's never been to a school in Burkina Faso.) This ham-fisted slam is a well-worn trope. I've seen it before. And it's not completely without merit.

The quality of American secondary science instruction runs the gamut. There's good, bad, and everything in between. And strictly speaking, the world is large: I don't think the US is dead last on any metric of science education. Still though, this disparagement is a popular chestnut. And other nations do turn in higher scores on standardized math and science exams, such as TIMSS.

Like nearly everyone else who charges US science educators with misguided failure, Kaku did not offer corrective measures. So I put him on the spot after his talk in the green room. Without any preface, I approached him and asked, with gentle bluntness, "So what should we be doing?"

He suggested that we should be teaching to students where they are instead of where teachers are, so as to better excite them about science. That is, we need to teach them lasers and GPS rather than friction. The physics of now, not the physics of 300 years ago. And the physics of movies is always good.

Nothing wrong with that at first blush. The physics of 300 years ago is the focus of most first semesters in most physics courses. Some like it to be the focus of the second semester as well. I'm not in that camp. I like to get into the physics of 200 years ago and 100 years ago. Quantum mechanics and relativity are 100 years old now, and we still refer to these topics as "modern physics". A hazard of modern physics is the dearth of workable laboratory experiences available to high school students.

The physics of movies includes much 300-year old physics.

It should be noted that when asked about his interest in ice skating, Kaku praised it as a pure expression of Newton's 300-year old laws.

I don't get the sense that Dr. Kaku has fully thought through his charge of US science education being the worst in the world. It's a easy charge to include in a public lecture, I suppose. It strikes me as lazy to make the charge without offering a solution. I don't think he's familiar with Next Generation Science Standards, but it wasn't a topic we were able to get to.

In any case, it seems Kaku will trot the globe announcing to all who will hear that high school science teachers in the US crush the curiosity out of previously inquisitive American students.

Now that I've revealed my new colors as "not a fan of Dr. Kaku" despite my generous introduction for the Speakers Series, I'll offer a few more areas for improvement. To the extent that they come across as petty, Kaku apologists can dismiss the entirety of my critique of his anti-educator slam.

His PowerPoint slides used a canned Microsoft background, Helvetica (not Helvetica Bold, just Helvetica) for titles and Times for text. Several slides included too much text that was not necessary to make the slide's point. Asking the audience to read text while he's speaking is not an effective approach. Where were times (!) he used red text on a blue background. On the upside: not one instance of Comic Sans. Low-quality presentation slides grate on me because I work hard to polish the slides I use in my own classes. I make sure graphics and animations are there to support the story I'm telling, and I don't use much text. I'm telling the story; the preso is there to back me up, not to compete with me.

Kaku attributed the quote, "Predictions are difficult, especially when the future's involved" to Yogi Berra. The true originator of that quote, like many good quotes, is in dispute. But one alleged originator is none other than physics Nobel laureate, Niels Bohr. In the event of doubt, I'd go with Bohr because physics. I don't doubt that someone as intelligent as Dr. Kaku is unaware of the Bohr attribution and has reasons for going with Berra. But it strikes me as throwing Bohr under the bus unnecessarily.

At least three times (and probably more), he admonished audience members to "Buy my book!" In my own personal opinion, that's not a phrase that should be uttered from the stage. It didn't help that he suggested that those who bought autographed books tonight could profit by selling those books on eBay. Not something that I've seen classy speakers do. (Humorist and author, David Sedaris, actually reads from someone else's book from the stage and encourages audience members to buy that book. That's classy! And Sedaris still sells plenty of his own titles at each appearance.)

The Physics of My Future? I won't be asked to introduce Dr. Michio Kaku at any of his appearances. And if I were, I would decline. Not so much out of injured indignation. More out of respect for his low estimation of my profession. It does Kaku no good to be introduced by someone who's made a career of crushing the curiosity of US science students.
Posted by Dean Baird at 1:35 PM 2 comments:

An unexpected delight: Working with the Sacramento Speakers Series

I am more likely to get things I don't deserve than I am to be denied things I do deserve. So there I was on a Tuesday night, introducing physics media star, Dr. Michio Kaku to an audience of some 2000 at the Community Center Theater, where he was the second celebrity in this year's Sacramento Speakers Series. 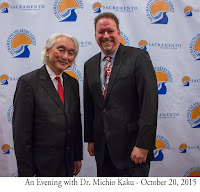 I was given the honor of being the introducer via my connection to Rio's Civitas program chair, Linda Reed. She works with the Series' "Share the Vision" program, which affords local high school students a special pre-show audience with the speakers. They get their own question and answer session with the luminaries. Quite brilliant, really.

Michio Kaku is well-known in the physics community as a prolific author and frequent media science expert. He's carved out a niche in prognosticating the "science of the future". He's very comfortable in front of the camera, and speaks with confidence and authority on the scientific topic of the day. This distinguishes him from most physicists, and it makes him a reliable media darling for journalists.

Kaku's presentations on how things will be in the future are captivating. I confess to not being well-versed in Kaku's expansive oeuvre. I even floated the notion of introducing Kaku to my physics- and skepticism-rich friendosphere on the off chance that Kaku advocated some weirdness that would set him outside the scientific mainstream. I didn't want to be heaping praise on anyone with a "Dr. Oz problem". No objections were raised, so heap praise I did. (The script of my introduction is in the comments.) 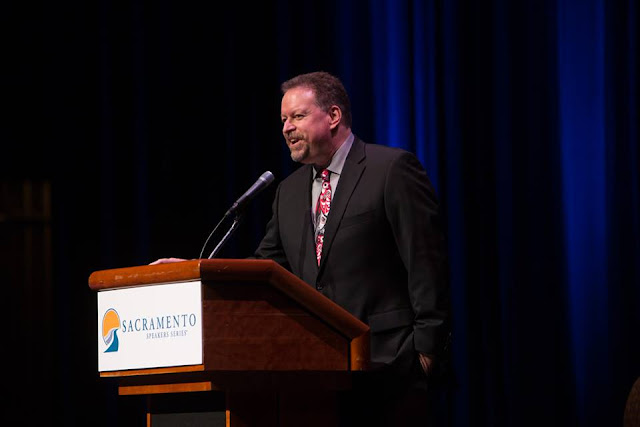 Everyone associated with the Sacramento Speakers Series was first-class and professional. They took very good care of me, and it was very groovy to hang out with the principal organizers, manager, Dr. Kaku, and ABC10's Cristina Mendonsa backstage in the green room. She's as personable as she is polished, and did a great job interviewing Kaku and managing the audience question cards. I made a point to personally thank Mitch Ostwald and each of the organizers who worked with me to facilitate my wee role in the evening. They are doing great work and adding to the cosmopolitan nature of Sacramento. [Photos courtesy of The Sacramento Speakers Series]
Posted by Dean Baird at 12:39 PM 1 comment:

Lesson for a 20-minute class

Many of our students took the PSAT today at school. After the testing period, we ran periods 1 through 6 at a little more than 20 minutes each.

So we watched and answered questions about Top Gear's segment on the three-wheeled Reliant Robin.

The video is here: Wimp.com—Top Gear's Reliant Robin. The full segment—shown on the Wimp page—is 14 minutes; shorter edits can be found elsewhere (YouTube, etc.). I couldn't figure out how to embed Wimp's video into streaming here.

The questions are here: Rolling Through Roundabouts in a Reliant Robin @ TPT.

Posted by Dean Baird at 3:04 PM No comments: