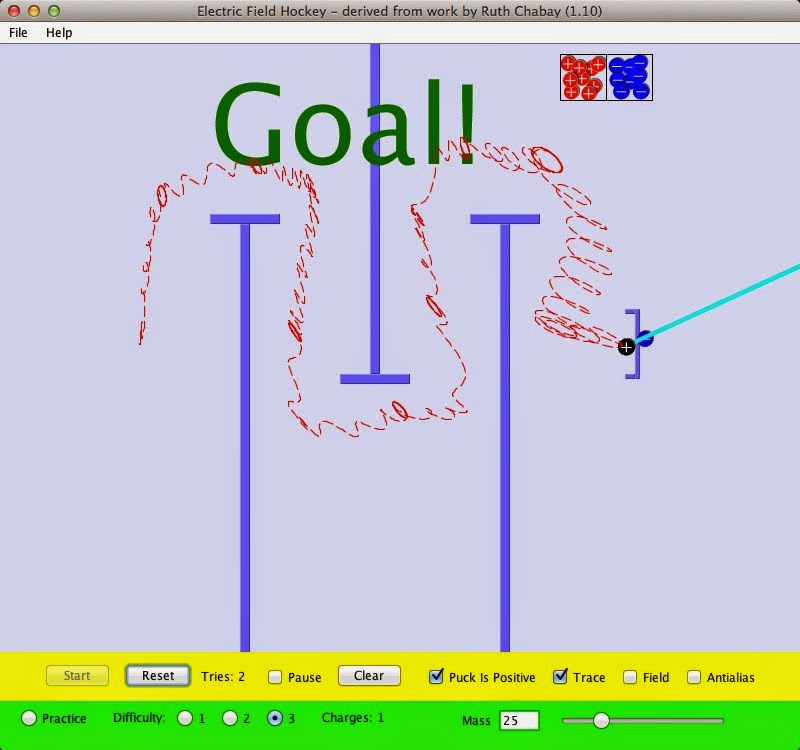 UPDATE: I notified officials and they replied as follows.

"Thanks for pointing that out. The team is aware of these issues, but we won't be able to fix them in the current Java version. If we redesign the sim in HTML5 we'll address bugs like this then."
Posted by Dean Baird at 7:00 AM No comments:

Captain Disillusion is at it again…

CD is always entertaining and informative. The language can veer off into the "earthy" category from time to time, so don't show 'em in class without screening them first!
Posted by Dean Baird at 6:00 AM No comments:

UPDATE: I've been told that the my interpretation is mistaken (which happens only on days that end in a "y"). The equation sheets posted on the page linked to below are the real and true 2015 equation sheets of record. The course description documents that include a previous version of these sheets need to be updated with the revised equation sheets, and it's that that will not occur until April.

AP Physics 1 and 2 teachers, I trust you all knew the newly-released equation tables were undergoing revision.

The College Board's statement regarding the equation tables

Revisions to the AP Physics 1 and 2 Equation Tables
The AP Physics 1 and 2 equation tables – previously published in the course and exam description, curriculum modules, and practice exams – are being revised to provide complete definitions of symbols. Updated versions of those documents will be available by April 2015. [Emphasis mine] In the meantime, please disregard the equation tables in the current versions of these publications. Instead, refer to these new, revised equation tables and share them with your students…"

I recently turned 50, so I realize that my recollection that the release of the revised tables was set for February 2015 could be in error.

But the College Board exhausted my patience when it repeatedly set and then pushed back the publication of the redesigned AP1 and AP2 course descriptions, starting in 2008.

Like I said, it could be my own memory at fault here.

If they set a February date for the new equation tables and then moved it back to April, who among us would be surprised?

If they did retreat from their own deadline on the equation tables, I'm guessing they didn't push back the deadline for classroom teachers to submit course syllabi for the AP course audit. You know the one: where you spell out in great detail the minutia of these courses that you've never taught based on a 230-page course description only recently made public, so as to show that you've turned on a dime from the old vision to the new vision. You had the summer to retool, redesign, and re-imagine.
Posted by Dean Baird at 1:14 AM No comments:

Sorry for the sudden aggregation binge. I should be working on my genuflection to The College Board (AP Physics 1 and AP Physics 2 syllabi), but my motivation for that exercise is so. very. low.

In the meantime, let's enjoy this confluence of Fibonacci numbers, 3D printing, and stroboscopy, shall we?

And, of course, video.

"These are 3-D printed sculptures designed to animate when spun under a strobe light. The placement of the appendages is determined by the same method nature uses in pinecones and sunflowers. The rotation speed is synchronized to the strobe so that one flash occurs every time the sculpture turns 137.5º—the golden angle. If you count the number of spirals on any of these sculptures you will find that they are always Fibonacci numbers.

For this video, rather than using a strobe, the camera was set to a very short shutter speed (1/4000 sec) in order to freeze the spinning sculpture."
Posted by Dean Baird at 10:56 AM No comments:

Can I write a Buzzfeed-(up)worthy click-bait headline, or what?

Anyway, what to do if you have skills in electrical engineering, dance, and martial arts?

Ladies and gentlemen, the Lords of Lightning.

Posted by Dean Baird at 9:11 AM No comments:

Momentum Mobile: Have you seen this equipment?

Demonstration or lab equipment for physics classes can vary from homemade of scraps and junk to store bought and polished shiny pieces. I believe there is a place for each in the classroom but sometimes there is no beating a truly well made purchased piece. An advantage to purchased pieces is that they often stand the test of time and are used year after year (or decade after decade depending on your teaching experience).

Many of us keep a "wish list" of sorts for our classrooms. This may be mental or you may actually have a collection of marked catalogs or ripped out pages. A wise physics teacher (*cough* Dean *cough*) once told me that keeping such a list could help get equipment for your classroom when random money falls from the sky. While it doesn't quite rain I have been lucky enough to have such lists ready at the end of the fiscal year or at the beginning of a new program when an administration is asking for things to buy. That's right, sometimes they ask us and you better be ready!

Yet sometimes you know just what you want to buy but you don't know where to find it. It may have been something you saw at a conference or in a catalog somewhere sometime and you can't quite place it. Whatever it is you just know, "If I had this then my students would completely understand [insert tough concept here]." Perhaps the most frustrating part is that you know the equipment is out there, somewhere, you just don't know where to look. But someone does; maybe avid Blog of Phyz readers?

Another Physics teacher in my district recently said that he wanted this momentum cart he had read about years ago. The cart has a slanted back (higher at the front, lower at the back) and marbles or ball bearings are placed in it. At the start the marbles are stopped from rolling out with a hand at the back of the cart. When you remove your hand the marbles start to roll out and because of conservation of momentum the cart starts to move forward. The marbles fall out one at a time and as they continue to fall the cart speeds up. The teacher said that he thought he remembered the second to the last marble would be the fastest and then the last marble is at rest. This part did not make sense to me but we will have to get the cart to experiment with. 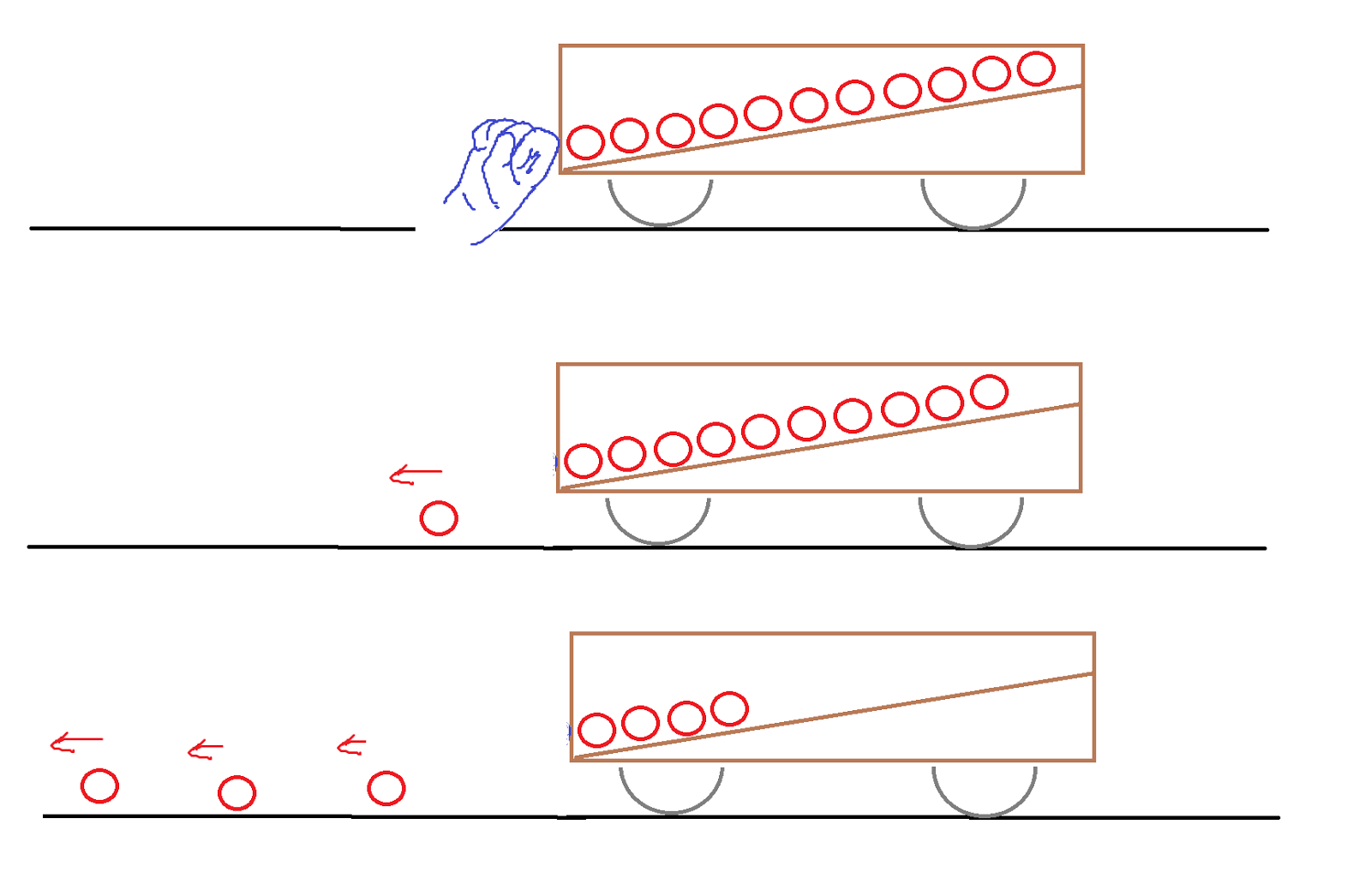 I made this simple image based on his description and he said it looks like what he had seen but didn't know where to find one. Over the years a few students have tried to make it but they have not been successful. Has anyone ever heard or seen anything like this before? Have you seen it for sale anywhere? Perhaps you know what is is properly called and a quick internet search can help us find it. Any and all help would be appreciated!

The Consumer Electronics Show (CES2015) was recently held, and vendors were pushing their latest and greatest gizmos.

This includes FLIR, whose FLIR One thermal camera case for iPhone 5/5S was discussed in a previous post.

The biggest complaints about FLIR One was that it was limited to the previous-generation iPhone. People with an iPhone 6 or an Android were left out of the thermal imaging party.

FLIR aims to address these concerns with their next generation FLIR One model. It's not a case, but an attachment.

Next Generation FLIR One (CES2015)

Posted by Dean Baird at 6:43 PM No comments:

Arcs over Amarillo: A sky full of halos

And my first attempt to embed a Facebook post and image URL. We'll see how it all goes.

"Yesterday morning, Texan Joshua Thomas took this picture in Red River, NM and shared it with us. He captured a truly special display of ice halo phenomena including rare suncave and sunvex Parry arcs, helic arcs, and intense supralateral and infralateral arcs. See also the diagramed version, which the outstanding folks at US National Weather Service La Crosse Wisconsin did for the photo. To learn more about ice halos and other atmospheric optical phenomena, see the Atmospheric Optics page: www.atoptics.co.uk. Thanks again to Joshua Thomas and NWS La Crosse for taking and documenting this halo display!"

I've updated the "Cosmos in the Classroom" page to include question sets for episodes 1–12 of the Neil deGrasse Tyson-hosted Cosmos: A Spacetime Odyssey.

The Cosmos page still has all the question sets for Carl Sagan's Cosmos: A Personal Voyage. Those pages have been updated to include name, period, date info in their headers.

So now there are sets for episodes I-XII of Sagan's Cosmos and episodes 1-12 of Tyson's Cosmos. Each series has 13 episodes, but my intent is for students to watch those final episodes without question sets.

Cosmos in the Classroom

My own classroom practice is to follow each unit with an episode of Cosmos. (Sagan's in Physics and Tyson's in AP Physics 2.)

I'm disappointed that Sagan's Cosmos was been removed from streaming video at Netflix and Hulu in September, 2013. That prohibits me from using these lessons as "flipped classroom" assignments.

I own the DVD version of both "seasons" of Cosmos. But I've noticed differences in the episodes on DVD compared to the episodes that stream on Netflix. Some are trivial and insignificant. But one invalidated a question I wrote in an early draft of the Episode 4 question set.

I hope someone out there is cataloguing all the "disc vs. streaming" differences. I'm not even sure why they exist at all. But I haven't delved deeply into the issue, as so many other projects beckon.
Posted by Dean Baird at 3:40 AM No comments:

A video similar to this one made it into my Facebook feed, and I saw fit to turn it into a YouTube Physics lesson.


So much physics. How could I resist?

There's the ability to use the sights and sounds to determine distance from the volcano to the camera.

Then use PhET's Projectile Motion sim to bring air resistance into the analysis. Huge differences!

Are the spectators at a safe distance? No need to wonder: find out how far those boulders could fly for maximum range. And maximum range with air resistance doesn't happen with a launch angle of 45°.

And don't forget about the adiabatic expansion cloud that appears and disappears at the outset.

Here's the student worksheet that I prepared. The lesson can be done in or out of class.

The answer key is available to classroom teachers who send requests from school email accounts. Ask for the Tavurvur Answer Key.

Posted by Dean Baird at 3:06 AM No comments:

I know it's been a while. And my output was off for 2014 compared to previous years.

So yeah, making this all happen at school to the best of my abilities keeps off the streets (and blogs) at night.

I have no idea when this will be completely sorted. It would be an error to presume that once the year is done, I'll have The Perfect Physics, AP 1, and AP 2 curricula all worked out and ready to repeat until retirement. But I also don't expect things to be as bad for me next year as they are this year.

I do have some groovy posts in the works. They'll be up soon! Neil deGrass Tyson's Cosmos and the Tavurvur volcano are topics.

But I must wave the "My Dear Machine" flag once again. I still love the song, and Leigh Nash's voice is dreamy.

Sixpence None The Richer - My Dear Machine

Posted by Dean Baird at 6:35 PM No comments: