My buddy and fellow skeptical photographer, Scott Hurst, sent this along.

If the video embed above doesn't work for you, click here. I hope to see more from master Danny MacAskill.

UPDATE: No, I couldn't leave "well-enough" alone. You know how I am. Here's a worksheet you can use as a classroom lesson to accompany the video clip. Can you write a better one? Of course! If you teach physics, you'll be keen to generate some estimation-based calculations. So have at it. Think of my lesson as a mere introduction to the video.
Posted by Dean Baird at 8:13 PM 2 comments:

See me on The Dark Side of the Moon 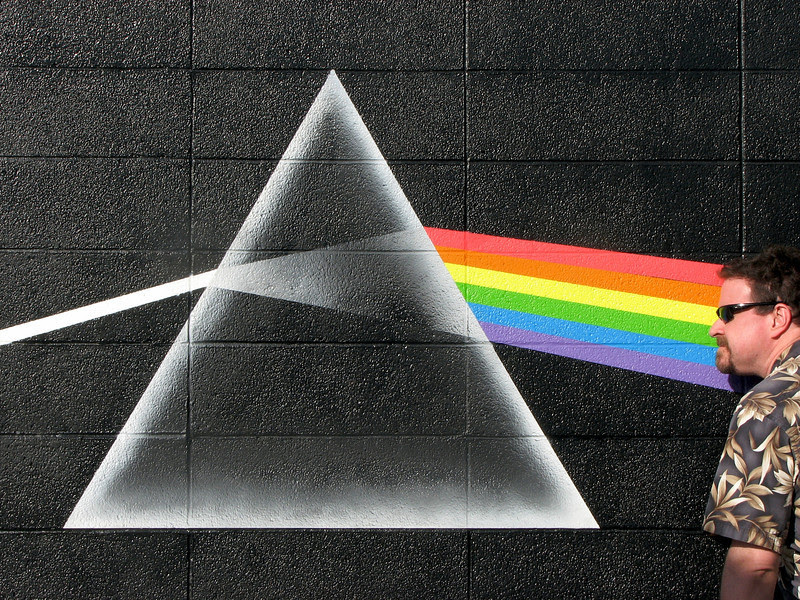 Alec Hodgins and I go back to 1988, when he joined the faculty at Rio Americano. I was a 1.5-year veteran at Rio at the time. We've had the good fortune to be able to help each other on various projects and to bend elbows from time to time.

Click the image to see the one-week photo album showing the construction of the mural. On Monday morning, the wall was blank. By Friday afternoon, the image was complete.

Alec is handy with tools and he overflows with drive for projects like this. I contributed a modicum of cleverness in the engineering and willingness to breathe spray-paint vapors. A number of Rio physics and French students provided invaluable assistance, making it possible to complete the project within the school week.

The end result speaks for itself.
Posted by Dean Baird at 9:11 AM 10 comments: 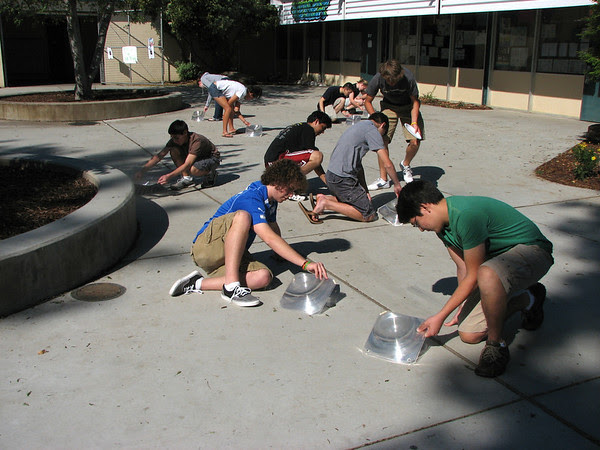 My friend and fellow physics teacher, Dan Burns of Los Gatos High School, mentioned using a large Fresnel lens to burn gum off the pavement outside his room.

A few years ago, my school purchased new overhead projectors for the classrooms. I shuddered at the thought of all the old OHPs going to the landfill. I intercepted as many as I could and salvaged the optics from them.

The harvest was bountiful. It included the Fresnel lenses that formed the stages of the OHPs.

Hence the community service project outside my classroom last week.

Two lessons to take away? One: always be on your toes for potential harvests of otherwise unwanted or unused school equipment. (I similarly collected dozens of headphones when the school purchased classroom PCs.) Two: it's nice to have bright folks like Dan Burns to get clever ideas from.
Posted by Dean Baird at 8:43 AM 4 comments:

Psychics can squeeze blood from turnips

...or at least from the throngs of bleevers who just fell from the turnip truck. Matt at The Skeptical Teacher shines a withering light on this psychic puff-piece masquerading as a human-interest time filler at CBS "News."

Bottom line: you can make a lot of money making up things to tell people. Check out Matt's note to see how hard it is to become a psychic.

And remember, there are no real psychics. If there were such things, where were they on 9-10?
Posted by Dean Baird at 6:33 PM 4 comments:

Trouble looms on the horizon.

As someone who moved his school away from AP Physics B as a first-year course, I applaud such an initiative.

The redesign is still in progress, and the College Board has not yet announced the course outlines for AP Physics 1 or AP Physics 2. Implementation of the redesign will not occur before 2013. But one proposal has been unveiled for teacher review and comment.

I like to include video clips in my lessons where appropriate. They add nicely to a well-balanced (and well-mixed) lesson.

Examples of scientific principles used in popular culture are always nice for critiquing. You show Roadrunner clips so students can reflect on where the physics is good, where it is bad, and "what should have happened?"

At some point, students might get jaded and assume every pop-culture clip you show will contain some misrepresentation of physics.

Then you show them this gem from The Big Bang Theory:

Sheldon's Doppler Effect Halloween Costume (I would have embedded, but embedding was disabled.)

The Big Bang Theory actually vets its scripts with a UC physicist. A physics-content misstep on TBBT is a rare event. And they drop in physics references like most sitcoms drop in toilet-humor references.

While discussing the Doppler Effect in class, I show the clip and ask students if Sheldon gives a correct definition. Some will knee-jerk a swift "no!" Wait time is important here. Others will eventually chime in with a "yes." I repeat the definition portion of the segment a few times without adding prejudice one way or the other. The tide sweeps through the room, and the "yeas" outweigh the "nays" soon enough.

I then assure them that they can watch TBBT with confidence that the physics will be correctly represented. Unfortunately this may simply ensure that TBBT will never be seen by any of my students. Sigh.

UPDATE: Did I mention I have a birthday coming up? I'm partial to 2XL.
Posted by Dean Baird at 10:41 PM 7 comments:

A Goldilocks analysis of the Physics RTQs

Each year since 2003, the California Department of Education has released 15 questions from the physics CST (California Standards Test). The growing collection is known as the Physics RTQs (Released Test Questions). One RTQ was removed from the set for bad behavior. It deserved it. So as of 2009, we have 89 physics RTQs.

There are 45 content standards in California's 9-12 Physics. How well do the RTQs cover the standards?

One might think that once the number of RTQs reached 45 (in 2006), all the content standards would have been covered. But the reality of selecting RTQs is not so simple. The process is necessarily complex. As a result, some standards were represented with multiple RTQs while others went uncovered. (Remember, too, that the Investigation and Experimentation Standard Set must also be represented in the RTQs.)

As of this year's RTQ set--including items from the 2008 test--all 45 physics content standards are covered.

One hopes that future RTQ releases will fortify weakly-represented standards and increase the variety of item types in the set.

There are many things one can do when not burdened with spouse or children. I will not burden this post with an exhaustive list. But one task that falls under the aegis is my thorough

This gem is a spreadsheet listing all the RTQ items by year of release and (more importantly) by standard. The actual items are in the RTQ PDF from the CDE; the spreadsheet merely shows their distribution. Go ahead, click and open it. I dare ya! (PDF or Excel.)

You really should open it and marvel at the OCD that was required to prepare it. And, of course, thank your lucky stars that you do not suffer such a level. But for the faint-of-anal-retention, I offer this:

2009 Executive Summary of the Physics RTQ Distribution
1. All Standard Sets are represented in proportion to the test blueprint.

2. Most individual standards are represented in balanced proportion.

3. The following individual standards are over-represented in the RTQs. Future RTQs sets should be selected in a manner that will exclude new items from Standards
1.A, 1.B, 1.G, 2.A, 3.C, 4.C, and 5.B.

For those who haven't memorized the standards by their alphanumerical designations, a truck will be around later to bring you to re-education camp. In the meantime, you can check the Blueprint. Spoiler alert: Set 1 is Motion and Forces, 2 is Conservation of Energy and Momentum, 3 is Heat and Thermodynamics, 4 is Waves, and 5 is Electric and Magnetic Phenomena. See the blueprint for the letters.
Posted by Dean Baird at 3:08 PM 1 comment:

Whether times are lean or not, this storage box is a good idea. Handy, simple, and sturdy; these boxes are answers waiting for your small-item storage questions.

Do not Mach fast kitteh 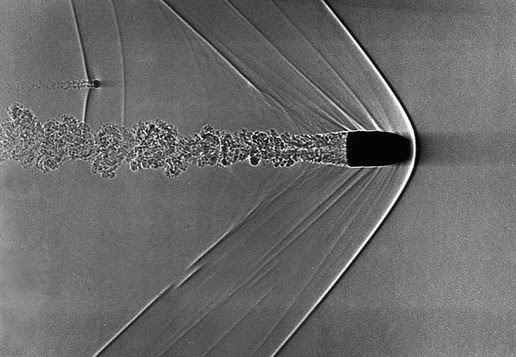 Email ThisBlogThis!Share to TwitterShare to FacebookShare to Pinterest
Labels: off topic, waves

I recently added a version of my Newtonian Dart demo to the upcoming Conceptual Physical Science Explorations 2e Lab Manual.

The trouble is getting good dart guns for this demo. When those of us "of a certain age" were young, these toys were easy to find in drug stores, grocery stores, and--dare I say--the five and dime! You need the classic, hard-stick and suction cup, spring-loaded dart guns.

But somewhere, this type of dart gun was used in a manner inconsistent with its intent. So it was pulled and replaced with safer versions. Bendy, flexi-rubber darts or foam darts were flung by a mechanism that didn't allow for downward firing. And so they were useless for a great demo for showing Newton's second law.

Arbor Scientific has risen to the challenge and found a batch of these classics. I hope they can find a supply steady enough to keep me stocked when mine expire.
Posted by Dean Baird at 4:21 PM 3 comments: 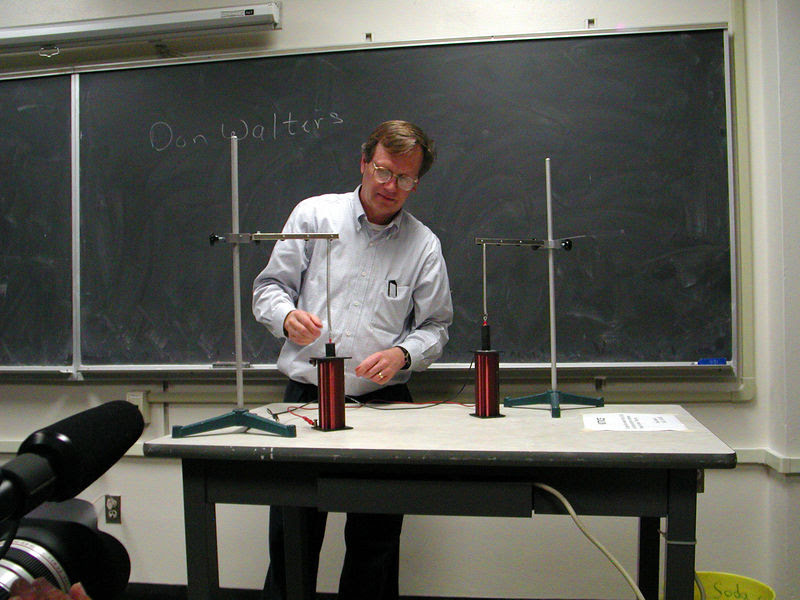 Here's my second attempt at a groovy electromagnetic interaction demonstration. It's based on a setup I saw Don Walters use at The Naval Postgraduate School at an NCNAAPT meeting. He did a quick take, and I thought it was an improvement on The Exploratorium's Magnetic Pendulums.

As I often do, I milked this demo (and many tangents to it) for all I thought they were worth. To summarize, this demo shows electromagnetic interaction and slowly and carefully constructs observational evidence for Lenz's law.

Find the preso here: Bobbing for Magnets QT. My presentations are rarely simple, linear expositions of the corresponding worksheet. You've been warned.

UPDATE: Fixed the link to the PDF. (Thanks Alby and Stephanie.) AND, I added a QuickTime Presentation for your enjoyment.
Posted by Dean Baird at 5:33 PM 4 comments: