The first day of school has come around again

The Book of Phyz is my collection of high school physics curriculum materials. The organization follows the two-year sequence I use at Rio Americano. The first-year course covers the California Science Standards for 9-12 Physics. The second-year course covers the additional material at the additional depth for the Advanced Placement Physics B Exam. Enthusiastic physics students at Rio can get four semesters of instruction!

I have endeavored in recent years to polish up the online materials for Physics 1. I'm now giving some attention to the AP Physics 2 materials (as promised).

The third semester (AP Physics 2, first semester) has been scrubbed down and uploaded. The student documents are up; I'm in the process of posting the presentations. (I'd call them "PowerPoints," but I use Apple's Keynote. I post them as Interactive QuickTimes so everyone can use them.)

For what it's worth, all the student docs have been updated. The presos should be posted soon. Most of the fourth semester should be up soon, too. The end of the fourth semester is still a bit dicey. I hope all you AP teachers out there can sympathize with the fact that my attention gets diverted in April and May. Working on the Book of Phyz at that point simply isn't a priority.
Posted by Dean Baird at 7:19 PM No comments:

Then click the link atop the gray area on the left-hand column marked "Test Results." You're getting warmer.

Now you should be on a page with a multi-pop-up menu area at the top. No really; you're almost there. Stick with me. Stay the course!

Enter your particulars. The results you want are for the CST, your county, your district, your school. You must know these to access your results.

Leave the other options alone and procede to click "View Results."

Scroll down. Farther. Keep going. All the way down to the bottom. And you're there: Physics!

Happy hunting!
Posted by Dean Baird at 8:00 AM No comments:

Email ThisBlogThis!Share to TwitterShare to FacebookShare to Pinterest
Labels: testing

The California Department of Education's (CDE) contract for the development and scoring of the California Standards Tests (CST) is a multimillion dollar agreement. But all the money seems to go toward developing and scoring the tests themselves. It seems a shame they couldn't carve out some part of the budget to put together a nice little Schoolhouse Rock-type bit. You know, puffy animation and an infectious jingle. Who can forget such classics as "Conjunction Junction" and "I'm Just a Bill (on Capitol Hill)"?

The latter would be an excellent model for describing the process by which a question (or "item") finds its way onto a live administration ("operational form") of a CST. Since it appears neither the CDE nor its contractor, Educational Testing Service (ETS) are willing/able to take on this challenge, I will. Not with the animation, jingle, or even a rhyme scheme one would expect from a real Schoolhouse Rock vignette. Just plain old prose.

3. ETS sorts the questions by content standards, edits the language and prepares art as needed for the items.

4. ETS presents these questions to the CDE. The CDE convenes a special panel for the specific purpose of reviewing these assessment items, The Assessment Review Panel (ARP). The ARP for science includes professional scientists and science educators (primary through university-level).

5. The ARP evaluates each item for content and alignment to standards. Some items are accepted as is, some are rejected out of hand. Others are sent back to ETS for revision. Those items will have to pass through the ARP before they could move forward.

6. Items that pass ETS/CDE/ARP muster are then placed on operational forms as field test items. Field test items are blended in with operational items on the administered tests. They don't count toward student performance scores. But their inclusion allows for the generation of reliable psychometric data. The psychometric data includes the percentage of students who marked the correct answer, the ability of the item to discriminate between higher- and lower- performing students, and how well the item aligns in the Rasch Model of Item Response Theory.

7. ETS evaluates the performance of each item based on the psychometric data it generated in the field test. Items that perform very well are placed in the bank of questions eligible for use on future operational forms.

8. Items that don't perform well are not immediately discarded. They are submitted to a second meeting of the CDE's ARP. With the psychometric statistics in hand, the ARP evaluates the item again. Some items are given approval to go into the bank of potential operational items. Some are rejected in light of the statistics and unforeseen problems with the item. Some are sent back to ETS for revision. Those items will have to pass through the ARP and field testing before they could be used.

Does such an arduous filtration process guarantee that only perfect items are allowed onto operational forms?

Every bit as much as the process for The Bill on Capitol Hill guarantees only perfect laws are passed.

UPDATE: If you prefer to see a process flowchart without my charm and nostalgia, here it is.
Posted by Dean Baird at 8:00 AM 3 comments:

It was twenty years ago today 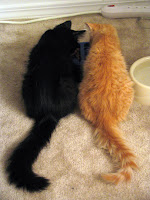 I moved to Sacramento in 1986. In August of 1987 I went to the Sacramento SPCA to adopt a cat. I grew up with a cat in the house and I was ready to adopt one for myself. I came home with two cats, Felix and Schroedinger. (The best toy you can give a cat is another cat.) They passed away in recent years.

Last week I returned to the SSPCA and adopted Ziggy and Sunshine. They're brother and sister. Though they're shy around people, they have yet to tire of rassling with one another.

Ziggy is dark, dark brown (nearly black) and has a huge, fluffy tail. Sometimes it appears to zigzag. I'd name him Zigzag, but I know everyone (including me) would just call him Ziggy.

Sunshine is very timid. She's unusual in that she's an orange/tabby. Most cats with that coloration are male. She broke one of her kitten canine teeth in her first three months; there was speculation we might find it lodged somewhere in her brother. She's several ounces lighter than her big bro, but none of that matters when they're tumbling across the floor.

They'll be four months old this week, so I'm getting them all caught up with their medical needs. Sunshine is already spayed and Ziggy is neutered, so these two won't add to the feline overpopulation of Sacramento.

Anyway, click on the pic for better, cuter pics.
Posted by Dean Baird at 10:08 PM 2 comments: 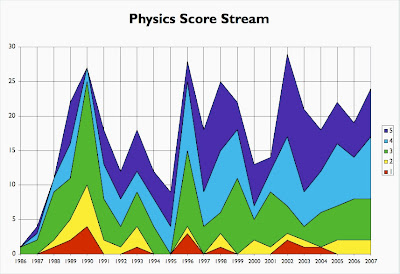 Rio Americano's 2007 AP results are in and 22 of our 24 Physics B examinees passed! Seven of them with flying colors. Some aspect of congenital OCD (from my Hoogerhyde ancestry) forces me to continue my longitudinal study of Rio's AP scores. Among the several exams I've kept track of over the years, Physic B creates the most stochastic pattern (!). Many other exams at Rio show nice increases over the years, Bumpy to be sure, but general increases in examinees over the years. The Physics B "trendline" is a mess. The pass rate isn't bad, though. 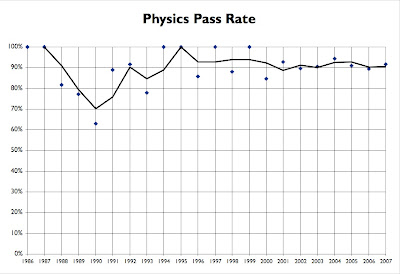 As always, nice passing rates are a testament to the hard work our students put in to prepare for the exam. I give my students the weights, but they have to lift them.

The bumpy ride indicates a certain fragility to the enrollment in AP Physics B at Rio, and the fact that students enrolled in the course are not required to take the exam. (Many schools require students in AP courses to take the exam.) The bumps will continue: the upcoming year's enrollment is as low as I remember it ever being (possibly under 15). And if past trends hold up, enrollment for 2009 will rebound. Please keep arms and legs inside the vehicle at all times.
Posted by Dean Baird at 6:00 AM No comments:

Earlier this week, Apple introduced newly redesigned iMacs. They sport an uncanny resemblance to the recently released and highly coveted iPhones. Funny how you don't see so many stories these days about the imminent demise of Apple. You did see wide coverage of the madness surrounding the iPhone's release. Did you see those lines? You'd think The Beatles were reuniting and going on tour.

But I digress. The other big news of the day was the new iLife 08 suite. Good thing I finally bought iLife 06 two weeks ago! So all-new versions of iPhoto, iMovie, iDVD, and GarageBand are available to go along with your always-free iTunes.

The smaller news was the introduction of iWork 08. The iWork suite of productivity tools began in 2003 with the release of Keynote 1.0. This was essentially the presentation software that Apple developed for use by Steve Jobs. He just couldn't bring himself to use PowerPoint. Who can blame him?

I had resisted PowerPoint Fever, even as it swept through California during the heady days of the Digital High School grant. Back then (late '90s/early '00s), many gazed upon PowerPoint as The Savior of Education. I sat through PowerPoint after PowerPoint in preparation of my school's turn at the DHS trough and realized that I had never seen a PPT that was effective. Most were complete snoozers!

When Apple released Keynote 1.0, I decided it must be possible (though not easy) to create an effective presentation. So I bought the program for $99 and started my attempts. I made a ton of lousy presos while honing my skills, and I still have much to learn. But it was the first step.

After a long and increasingly worrisome silence, Apple released iWork 05: a bundling of Keynote 2.0 and Pages 1.0. Now only $79. I didn't really need Pages, Apple's word-processing software, but I bought the package to get the newly updated Keynote. The following year saw iWork 06 with Keynote 3.0 and Pages 2.0. Keynote got better as my preso skills sharpened.

But MacWorld 08 came and went with no iWork 08. Steve Jobs' Keynote was all about iPhone. It seemed that there would be no new iLife or iWork until the new Mac OS X (10.5 "Leopard") was released. And that moment kept drifting back. Hopes for June faded into hopes for October. (My desire to try burning Keynote presos onto DVDs using iDVD 6 necessitated my purchase of iLife 06.)

Anyway, iWork 08 is out and Keynote 08 is now available. I don't have it yet, but I'm sure I'll have it soon. It's loaded with new features that I'll be able to use right away. Oh, and the oft-rumored Apple spreadsheet software, Numbers, is included. So now there are three apps: Keynote, Pages, and Numbers. Kinda like PowerPoint, Word, and Excel. Office, except designed by Apple.

Keynote 08 will set PowerPoint even further behind in the "my preso is cooler than yours" department. If you want elegant, good-looking presentations, get off the PowerPoint treadmill. It's not going anywhere. Jump on board with Keynote. PowerPointers will have a brief period of adjustment. But once you start creating gorgeous, captivating presos with Keynote, you won't look back.
Posted by Dean Baird at 7:57 PM No comments:

Email ThisBlogThis!Share to TwitterShare to FacebookShare to Pinterest
Labels: presentations

Or postview, I suppose. After a 16-day sojourn to the Canadian Rockies via Crater Lake, I've made my first sort of the photos. You'll find them in this SmugMug album. A second sorting and post-processing will result in a slimmer album with properly cropped and tweaked images. For the digital photographers out there, I'll add that this was my first attempt at shooting RAW files instead of JPEGs; now I have to learn how to process RAW files. So it may be a while before I finish the finalists album.
Posted by Dean Baird at 12:14 PM No comments: