I've taught AP Physics B since 1986. The course I taught was always intended to be an excellent advanced high school physics course that would compare as favorably as possible to an introductory college physics course. Engaging demonstrations and robust lab work was always important. But in the end, students needed to be prepared for the College Board's Advanced Placement Physics B Examination, administered each May.

From 1986 to 1997, we ran it as a first year course. But it was supposed to be a second year course, and in 1998, we brought our course into alignment with College Board expectations.

In recent years, sign-ups for AP Physics B dwindled at my school. Not so for AP Biology. Nor for AP Chemistry (which is a harder test than AP Physics B, as far as I'm concerned). Last year we introduced AP Environmental Science. It blossomed from one section last year to two this year. Impressive growth. While AP Bio and AP Chem held there ground, AP Physics bit the proverbial dust. Enrollment for 2014 did not merit a single section.

It was hard to observe the demise without concluding that the instructor of the course (that would be me) was doing something wrong. Data provided by the school's administration today sheds light on the subject.

[sanctimony]
What I didn't know until today was that my raw number of 16 4s and 5s represented better top-tier performance than was had in any other AP science course at my school (including one with over double my enrollment). Or that my six 5s outnumbered the 5s from all our other AP sciences combined.

AP and honors courses enjoy weighted grading in my district, so an A gets you a grade point of 5, a B a 4, and a C a 3. Where I grew up, a GPA of 4.0 was the mark of academic perfection. My students routinely have GPAs well above 4.2. Students hoping for admission to elite post-secondary institutions are keen to fly their GPAs into the stratosphere. Such students try to enroll in as many APs as possible. But with so many demands on their time (and many are in our nationally-recognized band program), meeting the academic rigor of an AP science course can be challenging.

The story of my AP Physics B's demise can be found in the data that follows. To me, the tale jumps right off the page. If it doesn't to you, interpret that as me overreacting; making a mountain out of a molehill. 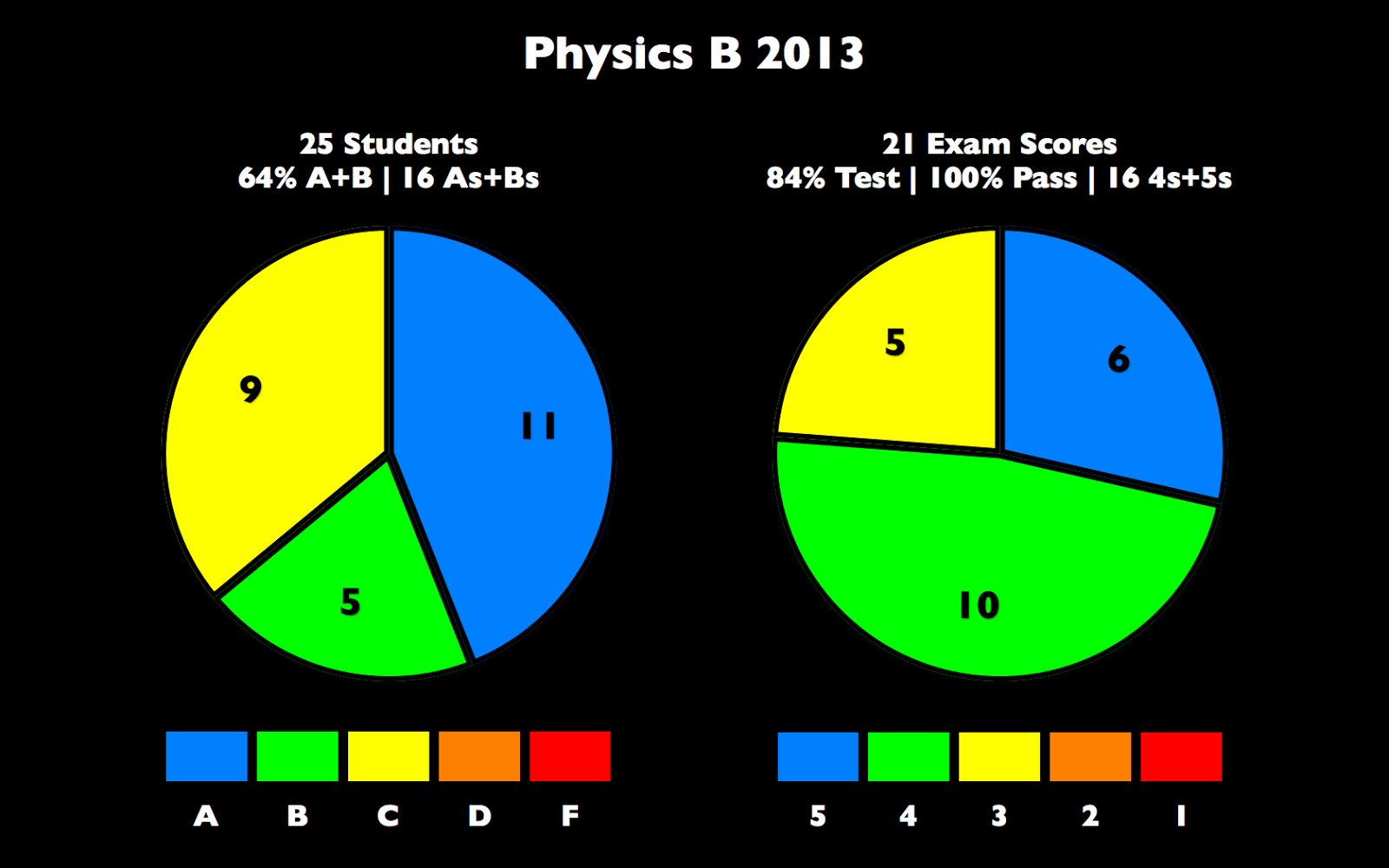 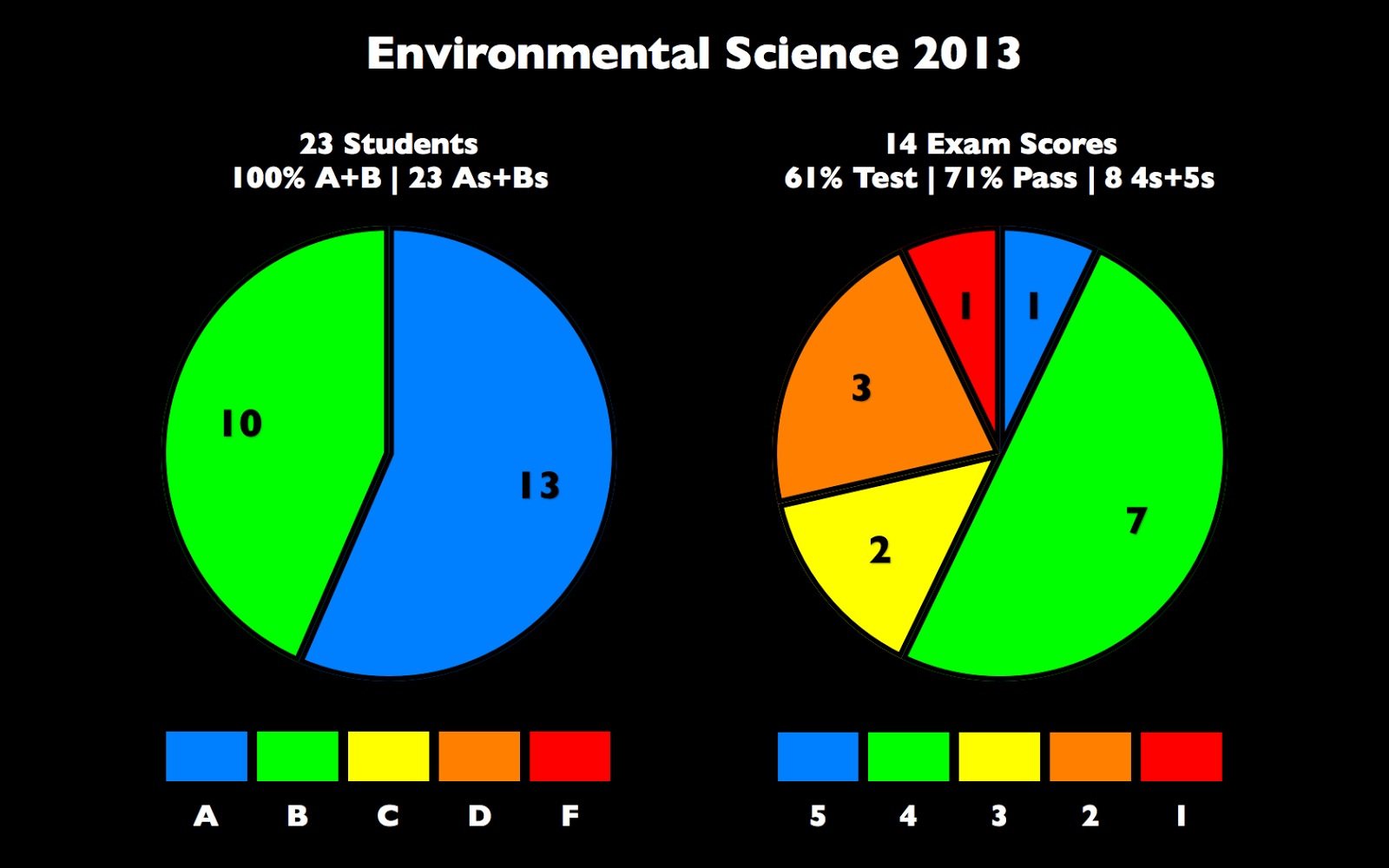 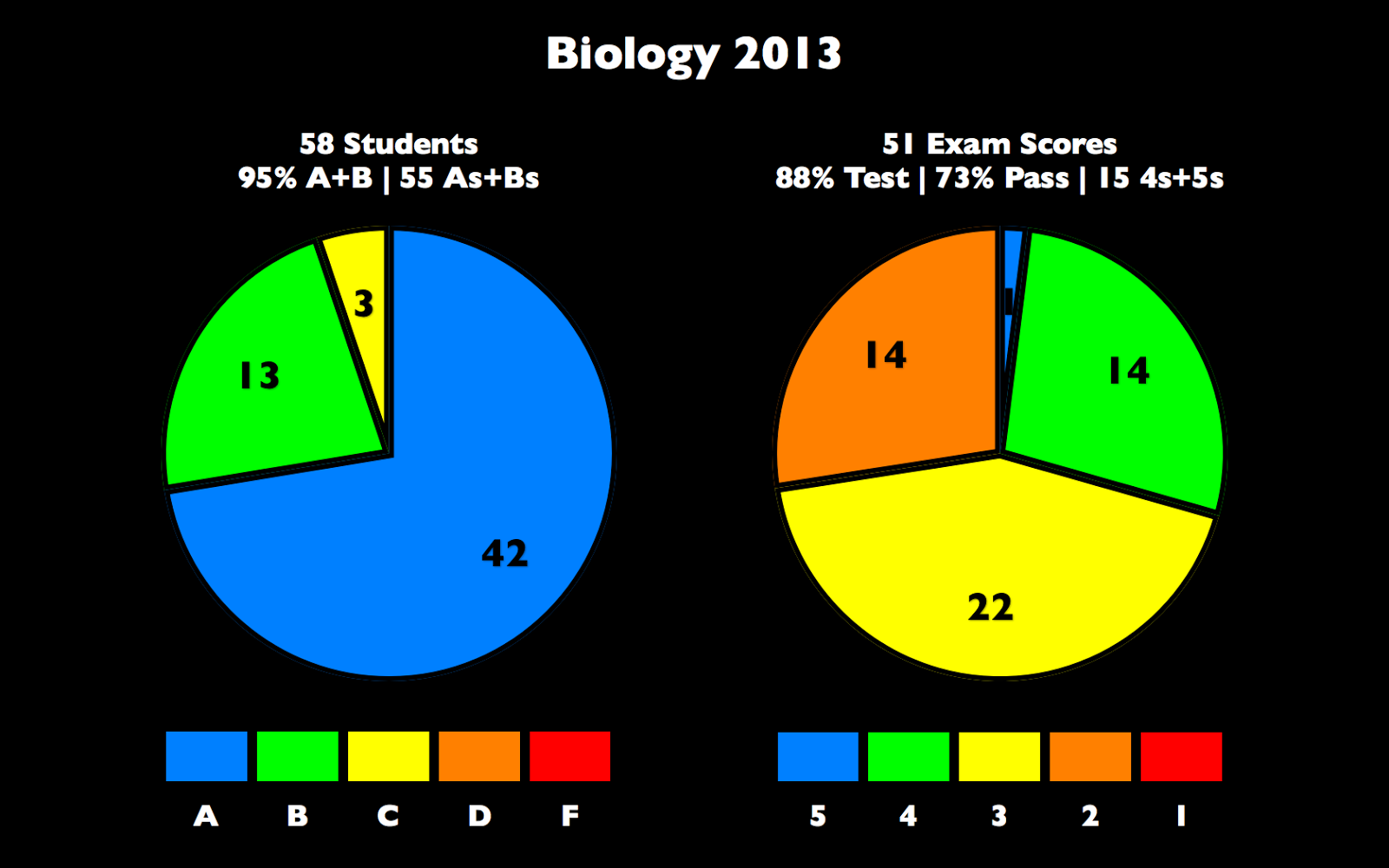 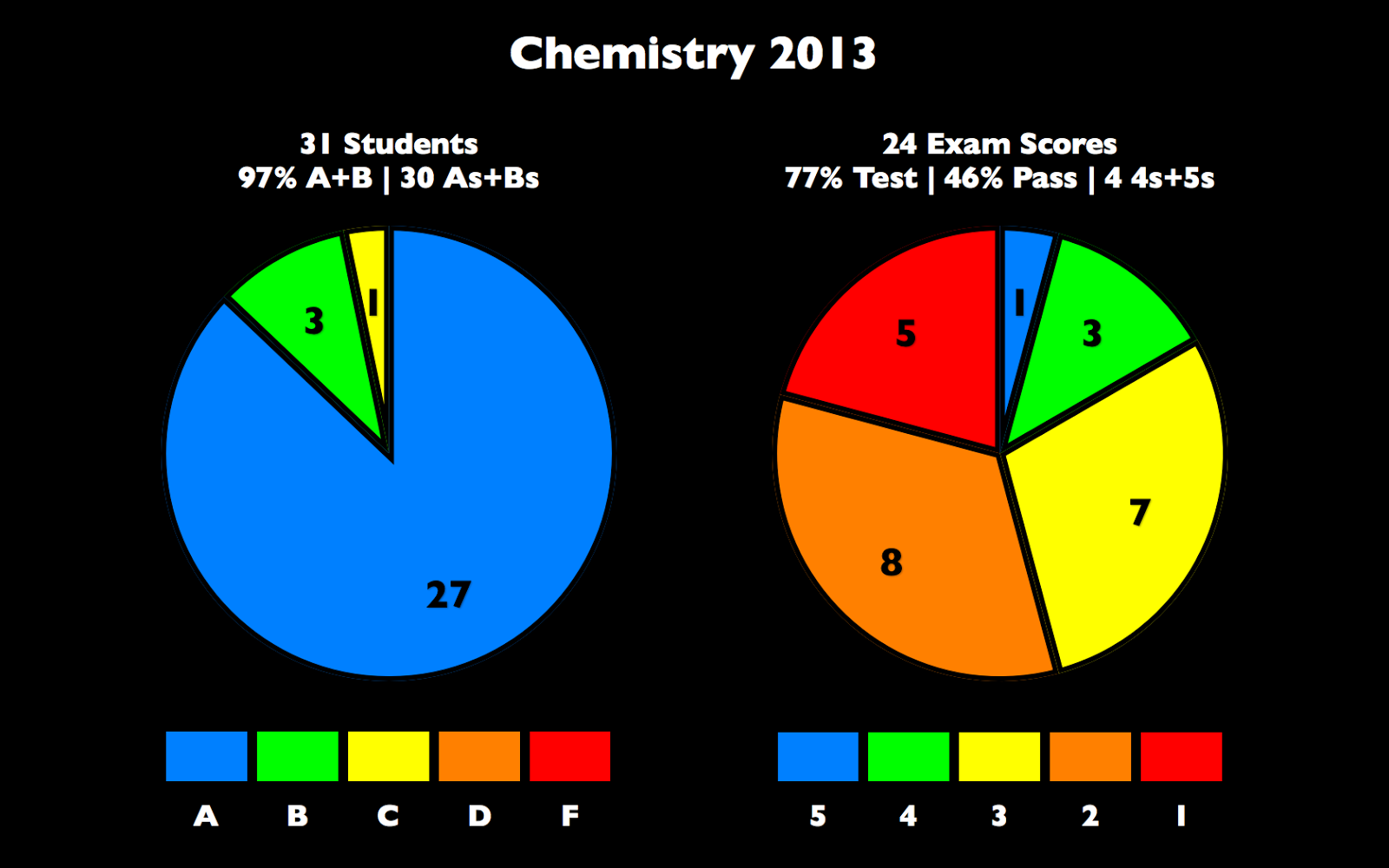 In AP Physics B, there were 11 As and 6 5s. There was insufficient enrollment to run the course in 2014.

In non-physics AP sciences, there were 82 As and 3 5s. Enrollments in these courses increased in 2014.

A riddle wrapped in a mystery inside an enigma? I think not.

UPDATE: Is it important that course grades given by high school teachers be accurate and valid? Very much so. Colleges are increasingly valuing classroom grades over SAT/ACT scores.
Posted by Dean Baird at 11:05 PM 13 comments:

Physics teaching colleague, Alex McKale of Stanford OHS, has turned the Scientist Valentines into a video, complete with a lovely physics-song soundtrack. Check it out!

Posted by Dean Baird at 7:11 AM No comments:

It broke yesterday, and they don't really make them anymore

I use it nearly everyday at school for one reason or another. It comes in handy in a pinch. Mine was a gift from Paul Hewitt when he was moving out of his residence in San Francisco in 2003. He had used it for years, and I used it for a decade beyond that. (And I'm pretty sure I used it more heavily than he did.) It ran through consumables at a reasonable rate, but procuring them when needed was never a problem.

But it stopped functioning correctly yesterday, and it will be difficult to purchase a replacement. When I got it, replacement would have been a simple matter of a visit to OfficeDepot or OfficeMax. But this device appears no longer to be made. Market forces have driven this species to extinction in the past few years.

The land-line telephone? No. Those are available in every shape and size. Land-line phones command considerable shelf space these days.

Fax machine? The 1980s live on! If I were in the market for a new fax machine, I'd have to comparison shop between multiple competing models.

Was it my typewriter ribbon? No. The stock of typewriter (and printer) ribbons is well maintained at the modern office supply chain. I will include a link to the Wikipedia entry on typewriter ribbon for the benefit of my younger readers.

No. The long-laboring device whose utility has not yet diminished from my daily life is the personal photocopier. Paul Hewitt gave me a well used Canon PC740 in 2003, and I used it well until yesterday. Yesterday it made a plastic gear-gnashing sound upon power-up. It made several good copies before fading to black. Literally. The copies it made in the midst of a run got darker until the machine produced only toner-filled black tiles. The scanning tube remains as bright as ever, but black is all that comes out.

You can argue that the era of photocopying is over. Today's documents are electronic. Paper is the past!

But don't tell that to the stores that no longer sell personal photocopiers. Substantial volumes of these warehouse stores are devoted to photocopying services.

And don't tell that to school teachers. The photocopier is the most heavily used piece of office equipment at the school. We've never had fewer than two high-volume machines on campus, with low-volume units spread hither and yon.

I suppose I'm just having an Andy Rooney ("This modern world of yours is crazy!") moment. Perhaps I'm simply jarred because the predicament was unexpected. I used the machine and expected to buy a replacement when it died. But I can't. At least not easily.

The invisible hand of the market is telling me, in no uncertain terms, that I would be wrong to want a personal photocopier. The device is not useful in today's world. Not like typewriter ribbons, digital frames, adding machines, fax machines, and land-line phones. Those things are now! They are the U2s of office machines. Personal copiers? Destiny's Child.

I know there is no arguing with the flawless reasoning of The Market. I'm just too dumb to know why I can't readily buy a photocopier, but there is no end to suppliers eager to sell me toner for a long-since discontinued photocopier.

What I clearly need to do is to replace my broken copier with today's office machinery rock star: the electronic wastebasket. It is clearly the Bruno Mars of productivity devices; it could literally shred the gnar!
Posted by Dean Baird at 6:37 AM 3 comments: