This summer's road trip had the AAPT SM13 at its nucleus. I drove from Sacramento to Portland slowly, via Yreka, Bandon, and Astoria. The first draft of a photo album is at

After AAPT SM13, it was off to Montana and Wyoming: Glacier National Park, Yellowstone, and The Tetons. That album of previews is currently in progress at

Regularly scheduled blogging will resume sometime in August.
Posted by Dean Baird at 3:35 AM No comments:

Email ThisBlogThis!Share to TwitterShare to FacebookShare to Pinterest
Labels: off topic, photographs 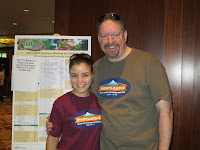 This will be the reservoir for the union of the sets AAPT SM13 and Dean Baird. It will evolve a bit in the near term and will require a bit of patience while I get it all together (hence references with no links). And it may appear to be a wee bit random.

Evidence of the High School Share-a-Thon will go here once I am made aware of it.

Bruce Mason prepared a list from the Video Share-a-thon (CKRL05).

There's an App for that Crackerbarrel session info

Other high speed vids from the show

Voodoo Doughnut
Posted by Dean Baird at 6:44 AM No comments:

One man's take on the current state of physics education

Scientific American guest blogger, Tony Rothman (author of a book called Firebird), has some strong feelings on the trends in university physics instruction. Some sparks fly into the realm of high school instruction as well.

I'm here at AAPT SM 2013, so the topic is of immediate interest.

I'm trying to process the message he's aiming to convey. It comes across as "Kids these days—you all better shape up, or else!"

Hat tip: Right on the Left Coast.
Posted by Dean Baird at 10:18 AM No comments:

I'm saddling up and getting ready to hit the trail for Portland State University and the 2013 AAPT Summer Meeting, July 13-17. I'm taking the scenic route and several days to get there. There will be stops in Yreka, Bandon, and Astoria along the way. Photographs may be taken; a zip line may be zipped.

At AAPT SM13 I'll be attending the W04 AP Physics 1 and 2 workshop led by Martha Lietz on Saturday and I'll be hosting the W42 Skepticism in the Classroom workshop on Sunday.

I've got my preliminary schedule of sessions and activities worked out, but I'm flexible enough to change plans at any time. (That's how I wound up at David Saltzberg's talk in Ann Arbor, and that turned out well.)

I look forward to the High School Share-a-thon and the Tuesday Night Demo Show: perennial favorites. I look forward to seeing PSU's giant barometer. And I very much look forward to reconnecting with friends I only get to see once a year (at these meetings). I'm a wee bit bummed that I'll be missing out on The Amazing Meeting which will be going on in Las Vegas July 11-14. This is the first time these two meetings have conflicted. I hope it's also the last.
Posted by Dean Baird at 11:07 AM 1 comment:

I don't know much about this Steve Mould character, but I feel like I should. He's responsible for showing off the bead chain curiosity posted below and now (via serendipitous clicking), I come across this.

This video relates color vision back to the optical biology involved. It compelled me to learn more about cones and rods than I knew.

For example, I didn't know there was a 20:1 between these two types of photoreceptors, but there is. I'll leave it to you to figure out which is preferred. (The population of the preferred one is 90 million, vs. 4.5 million of the other.) I didn't know about S, M, and L cone types, either. Why must I get dumber as I get older?

Anyway, check out this story of color vision as told by Steve Mould. At the risk of offending fans of My Little Pony, I'm going to say that friendship is simple; magenta is magic!

Colour Mixing: The Mystery of Magenta


But what about violet? It's a pure, unmixed color with a wavelength range all its own. If magenta is triggered by [spoiler alert] the red cones and blue cones getting tickled while the green cones are not, is violet the result of a weak tickling on the blue cones while the rods are reporting plenty of light?

My ignorance knows no bounds.
Posted by Dean Baird at 2:14 PM No comments:

Fireworks are a tempting subject for anyone with a camera. Since I count photography as a serious hobby, I am subject to this temptation.

But shooting fireworks is non-trivial. What aperture? What shutter speed? What ISO? Modern cameras have been programmed to record nice images in a variety of settings. But not so much for fireworks. A fast shutter, suitable for handheld shooting, is nearly useless (except, perhaps, during the finale). If you google "fireworks photography," you will find no shortage of photography tips.

Additional challenges arise when you are unfamiliar with the venue. How big will the 'works be in your field of view? Which way is the wind blowing?

I use a tripod and a 24-70mm lens. I now use an aperture of f/8 and a shutter speed of "bulb". I use a cable release to open and close the shutter. For my shoot in Washington, DC last year, my shots were a bit wider than they needed to be as I was a significant distance from the show. At Cal Expo last night, I was right at the show; I felt like my 24mm lens was too narrow. The results didn't necessarily bear that out.

Another challenge is focus. Last year, I used autofocus for each shot. Many shots were spot on, but some were off. The real problem with AF is that it needs a subject to focus on. But if you wait for a burst, then half-press to activate AF, the fragments are well into their trajectory by the time you begin your exposure. Spinning the focus out to a hard infinity doesn't necessarily get you critical focus, either.

It's tough to get good test shots to chimp (examine) during the show. Things happen fast. So last night, my experiment was to use AF on an exposure, chimp it, then switch to manual focus and not touch the lens. The focus seems good, though maybe not perfect.

A couple of things I might have done better... I wasn't sure I was going to out to show, and left it to the last minute. The battery in the camera was on its last bar. The spare battery in the charger was completely dead. My monstrous DSLR defaults to long exposure noise reduction. This may very well be a good thing, but it makes you wait for an interval equal to the exposure time until you can shoot again. It slows you down. Next time, I'll turn it off and see how badly that goes.

Based on advice I had seen, I set the ISO to 200. Since overexposures seemed more likely than underexposures, I'll go with 100 next time. I leave white balance to auto. There may be a better white balance setting to use, but I'm unaware of it.

The real art in shooting is deciding when to open and close the shutter. I try to open when I see a rocket going up and close when the fragments have played out. But it's rarely that simple once the show is on.

A photographer prefers to have a nice foreground in fireworks shots. I managed that for my DC shoot with the Washington Monument, the Lincoln Memorial, and the Potomac River. That option is not really available at Cal Expo. (Additional hazards at Cal Expo: Everyone doing their "safe & sane" fireworks in the parking lot. It's like driving through a war zone getting in and out. Getting out is non-trivial; patience is key. And the heavy metal tribute band that 98-Rock thought would be a good idea for pre-fireworks entertainment? Not so much. Next year, I gotta remember earplugs.)

The upside is that with only fireworks in the frame, one needs not show much (if any) restraint in post-processing. Amp up the contrast and saturation to your heart's content.

Here's what I got at Cal Expo last night. [Flickr album]

Here's what I got in Washington, DC last year. [Flickr album]

Email ThisBlogThis!Share to TwitterShare to FacebookShare to Pinterest
Labels: off topic, photographs, photography

Facts & Myths Regarding Next Generation Science Standards in California

Fact or Myth?
• California adopted the Next Generation Science Standards (NGSS) in April 2013.

• California educators have been involved in reviewing the standards and providing feedback to the author team, the Department of Education and the Superintendent of Public Instruction.

• If adopted, NGSS for California represents the curriculum for science instruction in California.

• California will need to write a Science Curriculum Framework based on NGSS for California (assuming the standards are adopted).

• The grade 6-8 standards represent three courses in earth, life and physical sciences, sort of like what we have now.

• The grade 9-12 standards represent the courses that will be offered in high schools.
Posted by Dean Baird at 2:44 PM No comments: