Inertia is how much, not if

Hello Blog of Phyz world! I wrote a piece for the Talkin' Physics column in The Physics Teacher's December 2020 issue. In the interest of sharing it more widely and outside of a paywall, below is the blog-ified version of that article. You can also find a pre-print PDF linked here.

Inertia is an elusive concept in physics, and it is occasionally used to explain similar-seeming yet different concepts. The goal of this article is describe two scenarios which are commonly explained using the word inertia, even though that same word is being used to describe two different phenomena. A discussion clearing up this ambiguity follows the examples.

Consider a block of frictionless ice in the bed of a flatbed truck, as seen in the figure below. If this truck begins to accelerate from rest, the ice will remain stationary with respect to the ground and eventually fall off the back end of the truck. Why does this happen?

Next, consider the two blocks on horizontal frictionless surfaces shown below. Ropes pull them both to the right with 10 N of tension force. Block A mass a mass of 1 kg, while block B has a mass of 5 kg. Which one has a greater acceleration, and why?

Inertia is often invoked to explain both of these examples. In the first, the frictionless ice block maintains its state of rest of because of its inertia. In the second, block B has a smaller acceleration because it has more inertia than block A.

The theme song for Bill Nye the Science Guy famously states that “inertia is a property of matter.” If we accept this Bill Nye maxim, then only the second example is truly a demonstration of the idea of inertia. The frictionless ice of the first example does not remain at rest relative to the ground because of any intrinsic property it has. Rather it stays at rest because of its lack of net interactions with other objects around it. The first example illustrates how matter behaves when interacting or not interacting with other objects, but it does not illustrate any property that matter has. In the second example, Block A accelerates more than Block B because of a property intrinsic to each block.

Similarly, Donald Simanek argues that most so called “inertia demonstrations” would better be classified impulse demonstrations. On the topic of the classic tablecloth pull demonstration, Simanek writes that, after viewing the demonstration, “The audience didn't see anything that showed that objects with different inertia (mass) behaved differently.” Instead, they saw that you could reduce the impulse delivered to plates by reducing the amount of contact time the plates have with the tablecloth. Again, we see a demonstration of matter’s behavior when interacting with other objects and not a demonstration of something intrinsic to matter itself.

In this view, inertia is a property that says “how much” rather than “if.” It does not say whether an acceleration will happen, but rather how much acceleration will happen for a given net force. For example, an object having an inertial mass of 5 kg means that, for every additional 1 m/s/s you want the object to accelerate, you will need to exert an additional 5 N of force. This is what we mean when we say that mass is a measure of inertia. It does not mean that it is five times better at maintaining a constant velocity than a 1 kg object. Both would be equally good at doing that if there is a net zero force acting on those objects, and both would be unable to do so if there were a net force exerted on them.

Perhaps, to bridge the gap between the two demonstrations, we may want to say that the intrinsic property inertia measures how little an object deviates from its inertial path when a given net force is exerted on the object. We could modify our frictionless ice in the truck example to demonstrate this idea. To do so, we would need to replace our frictionless ice with regular, boring ice with friction, so that there is a nonzero net force on it when the truck accelerates forward. We would also need to have two blocks of ice of different masses so that we could compare how much one deviated from its rest position relative to the other for a given friction force. Doing so would allow us to demonstrate than an object with more inertial mass deviates less from its inertial path than object with less inertial mass when the same force is applied to each. Inertia is a comparison of how much, not if.

Similarly, the tablecloth demonstration could be amended to be a true demonstration of inertia. It is not enough to pull a tablecloth out from underneath a ceramic plate to call it an inertia demonstration. If you instead pulled a tablecloth from underneath both ceramic and paper plates and compared the accelerations of each, then you would have a great demonstration of the property inertia. Both plates accelerated, but one acceleration more. Why? Because the plates’ inertias differ. In this example, we are not saying that the ceramic plate remains stationary. Instead, we are saying that its change in velocity is less than the change in velocity of the paper plate. The emphasis is on the amount of change, not on whether or not change occurs.

In the end, it may be time to retire the word inertia altogether. Many physics teachers are comfortable requiring students to refine statements around gravity, asking them to “upgrade” their language from saying gravity alone to saying gravitational force, gravitational field strength, or acceleration due to gravity. Similarly, ambiguity surrounding inertia can be avoiding if we choose language that is more specific.

For example, one could say that Newton’s first law describes an object’s inertial behavior or the inertial path it may follow. These are not intrinsic properties of matter, but rather descriptions of how interactions affect what matter does. Inertia, in this sense, cannot be quantified. Newton’s second law, on the other hand, describes an object’s inertial mass—its resistance to acceleration. The inertial mass described in Newton’s Second Law is an intrinsic property of matter, and it can be quantified.

Like gravity, inertia is a broad and overarching concept. Saying an object has the property inertia is less clear than saying it has inertial mass. Saying an object moves at a constant velocity because of its inertia is less clear than saying it follows its inertial path or it is exhibiting inertial behavior. By improving our language, inertia can be both “how much” and “if.” We simply need to clarify which we are using and acknowledge that they are not the same.

Posted by Unknown at 2:19 PM No comments:

Email ThisBlogThis!Share to TwitterShare to FacebookShare to Pinterest
Labels: inertia 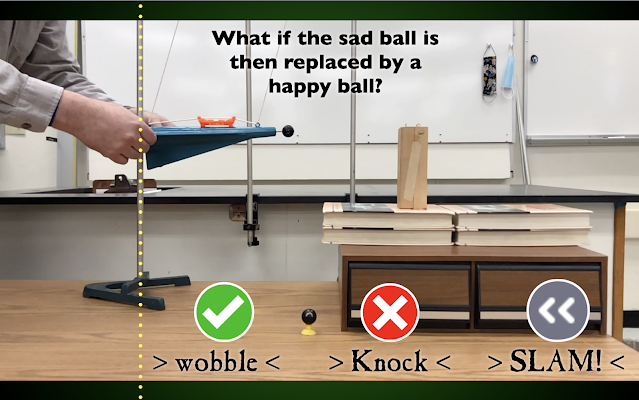 I inherited a stop/bounce dart when I arrived at my school in 1986. You arrange the dart as a pendulum and swing it into a wood block. Back in those days, you ran the unadorned nail point into the block for the stop, and attached a rubber stopped to the nail point for the bounce.
Since then, the advent of "happy" and "sad" balls improved this demo. And happy/sad pendula/mallets have been commercially available (help me out with a link if you know one).
Arrange the dart so that it barely knocks over the block using the happy ball on the tip. Then switch to the sad ball and allow for predictions and arguments. Then proceed with the reveal.
Things That Go "Bump" [Virtual Demonstration] at Teachers Pay Teachers
Posted by Dean Baird at 7:06 AM No comments: