So I'm in Big Bang heaven! The show's audience has grown from 8 million to 10 million. The hope is to grow that to 13 million with a better time slot in season three.

Saltzberg related a story about a nice email exchange with a young lady enrolled high school physics regarding how far the Earth moved during an on-screen kiss. He also received a touching note from Isaac Asimov's granddaughter.

One thing I will put David Saltzberg on the spot for is his intent to have the show produce a teacher DVD with science-related clips perhaps after season three. He mentioned it, but it's not always easy for people in his position to see the true value of such a thing. During Q&A, I told Saltzberg how I use a Big Bang clip in my class. Surprisingly, he was aware of my blog post relating that lesson, and assured me that Bill Prady was aware of it, too. So much for my theory that only three people (including my mother) ever read this blog.
Posted by Dean Baird at 5:53 AM 3 comments:

The Amazing Meeting 7 in pictures (and one video) 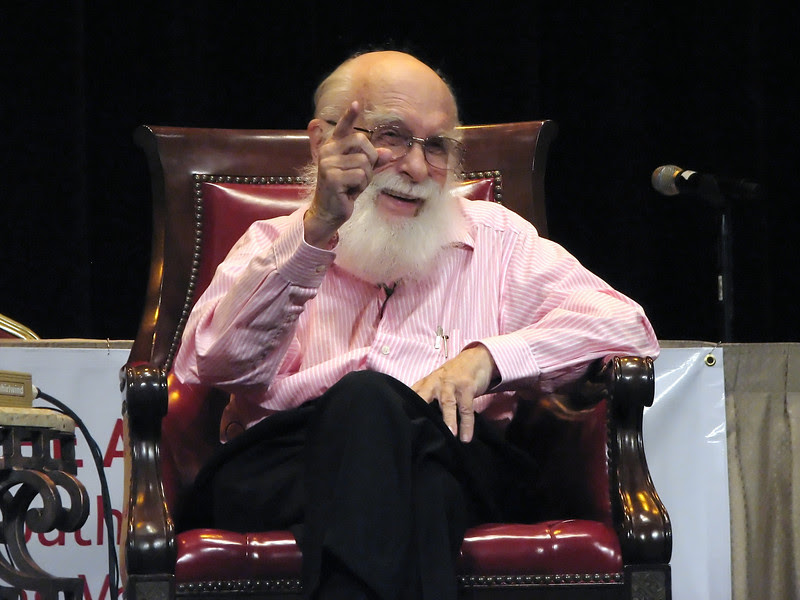 The Amazing Meeting 7 was held July 9-12 at the South Point Hotel Casino and Spa in Las Vegas Nevada. The Big Bang Theory producer, Bill Prady, was the keynote speaker. He was joined by luminaries Penn & Teller, Mythbuster Adam Savage, Bad Astronomer Phil Plait, Jamy Ian Swiss, and many, many more. Events were many, opportunities for sleep were few.

Over the years, TAM attendance has grown from 150 at TAM1 to over 800 at TAM6. Between TAM6 and TAM7, however, the global economy tanked. And TAM travel, attendance, and lodging adds up. Nevertheless, TAM7 brought in well over 1000 attendees.

I wrangled a conference seat that turned out to be much better than I deserved. Front row center. It was a better seat than The Amazing Randi had. So I did my best to get nice pictures to share with those whose view was obstructed by heads. The result?

A professional photographer was also working the event. More talent, skill, responsibility than me, etc.

He got more than I did.

I serendipitously brought my Casio EX-F1, and my serendipity was rewarded. Fellow physics teacher, Matt Lowry from Chicago, performed the bed of nails demonstration at the first annual TAM Ham Talent Show. I caught this:

The video can be seen as a QuickTime video here.

The web should be reverberating with more and more reports of TAM7; I won't try to replicate the work of others. I'm getting ready to visit friends and family in Michigan before attending the American Association of Physics Teachers Summer Meeting in Ann Arbor.
Posted by Dean Baird at 5:10 PM No comments: Tune in to the mission transmissions on this 40th anniversary at

We Choose The Moon (http://wechoosethemoon.org)

The site will plug you into the current state of the mission and has many tangents to keep you occupied during quiet times (especially the "loss of signal" intervals). Keep the site running in the background while you work away at the tasks of the day.

Forty years later, the Apollo missions to the Moon remain the greatest journey ever undertaken by mankind. In 2009, that milestone should be both celebrated and mourned.

When will we do better?

I have just returned from The Amaz!ng Meeting 7 (TAM7). Much to do in catching up. But first this.

As you may know, the James Randi Educational Foundation (JREF) has long administered the Million Dollar Challenge (MDC). In hopes of verifying objectively observable paranormal, supernatural, or psychic phenomena, James Randi offered $1,000,000.00 to anyone who prove such abilities.

The JREF and the MDC claimant then design a test (protocol) that will allow the claimant to demonstrate their ability. The claimant must pass a preliminary test and a final test. The protocol is carefully designed to prevent fraud or trickery on the part of the claimant or the JREF. Both parties must sign their agreement to the protocol.

Claimants who make if as far as the preliminary test have so far failed. Without exception, as far as I know. Although they agree to the protocol before the test, their failure in the test compels them to find fault with the protocol. If it does nothing else for them, the actual test opens claimant's eyes to previously-hidden inadequacies in the protocol. Sadly, the test rarely drives claimants to the conclusion that their psychic abilities do not exist.

On Sunday, July 12, an MDC preliminary test was made of claimant Connie Sonne. Connie Sonne's claimed ability was dowsing. The test was made shortly after the close of TAM7 in the same conference room at the South Point Hotel Casino and Spa.

TAM7 attendees were allowed to witness the test live in the room, provided they signed and swore an oath of audience silence. All cell phones off (not set to vibrate--off). No noise, no disturbance, and an assurance of swift removal for any violation. All this out of respect for the claimant and the administration of the protocol. Hundreds of TAM7 attendees watched live, more watched online via a live streaming on the web.

I was there, in person, about 40 feet from the Connie Sonne and JREF MDC administrator, Banachek.

The short version of the protocol is this: a single deck of cards was sorted by suit. The face cards were removed. Each card was placed in a small envelope. Each small envelope was placed in a slightly larger envelope, so that each card was secure in two envelopes. The cards of each suit (clubs, hearts, spades, and diamonds) were then placed in a larger envelope. This part of the protocol was completed in advance of the test and the collection of envelopes remained in the hands of a private security company until the administration of the test.

Banachek opened, in succession, the large envelope for each of three suits. For each suit, Banachek laid out the 10 envelopes (cards 1-10, where 1 is represented by the ace) directly in front of Sonne. Banachek then rolled a 10-sided die. Sonne then doused to find the card that matched the roll of the die.

More in the comments.

UPDATE: Here's the official JREF report.
Posted by Dean Baird at 11:25 AM 2 comments:

If homeopathy were valid

When the Iron Curtain fell, The Amazing Randi visited Russia. He found similar nonscientific nonsense being practiced as medicine. Who knows how much pointless suffering came as a result?