NGSS? AP1? AP2? What physics is covered where?

Here's my first blush attempt to sort out the scope of each flavor of non-calculus high school physics.

One thing I will say about the new AP Physics 1 and AP Physics 2 is that they are intentionally, deliberately de-emphasizing the notion of content. They've never wanted to really spell out, in detail, the specific topics covered in each course. The College Board is keen to talk for days about the emphasis on inquiry and big ideas. They seem keen to relegate the physics content specifics to the canvas on which inquiry and big ideas are painted.

In any case, I did a "back of the envelope" style stream-of-conciousness layout of physics content topics and where—if at all—they are covered in the upcoming NGSS, AP1, AP2 scheme. The green, checked topics are, in my estimation, explicitly called for. The yellow, slashed topics are implied (or, more correctly, inferred by me). 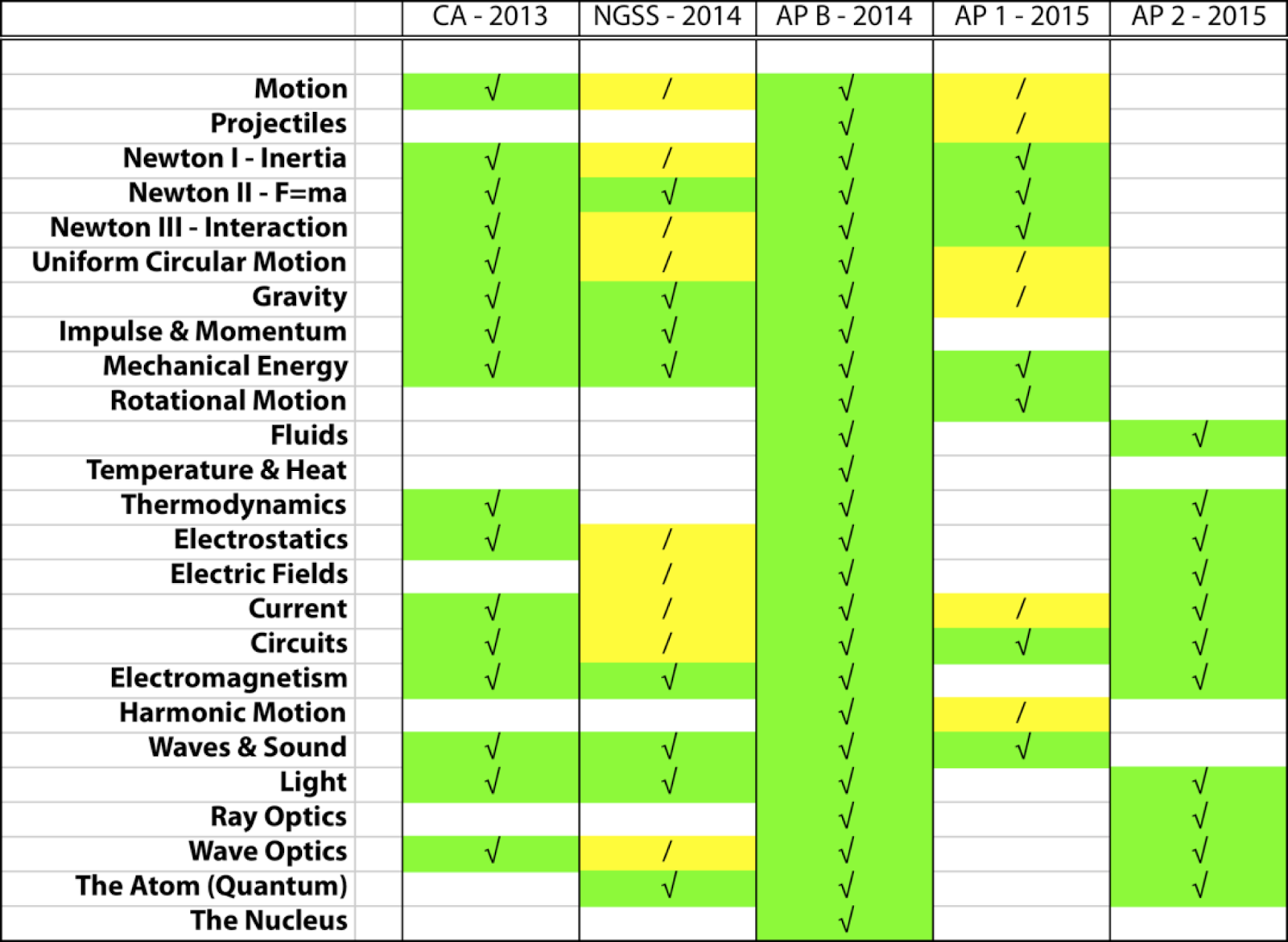 As mentioned previously, I'm converting the curriculum material I've written over the years from Canvas documents to Keynote documents.

Just before 10pm last night, I completed Phase 1 of this project. All my Physics 1 documents are now converted. This was an important milestone to exactly me. The Phyz Springboard: Understanding Rainbows was the last to be rebuilt. All tolled, over 200 documents were reconstructed. Most were two pages, a few were only one, but many were three or more pages. I don't know exactly how many pages had to be rebuilt, and it's probably better that way.

Work has already begun on Phase 2: AP Physics B (now AP Physics 1 and 2). But there are miles to go before I sleep on that. Completing Phase 1 took the better part of two years. If all goes well, Phase 2 will be done sometime in 2016. I'll need my aging MacBook Pro (2008, Mac OS X 10.6 Snow Leopard) to hold up through then, since my newer MacBook Pro (2012, Mac OS X 10.8 Mountain Lion) does not have Rosetta and so cannot open Canvas X.

The seaworthiness of my lifeboat, Apple's Keynote, has been cast into doubt by Apple's dramatic botching of Keynote 6. It appears that Apple really doesn't want to author software anymore. As a matter of pragmatism, I'll need for Apple to fix Keynote (unlikely), or at least allow for the continued operation of Keynote 5 for another 10 years (not likely). Both of those are tall orders.

Here's where the Canvas X to Keynote 5 stand now. (Green means a section is complete, orange means a section is down to a fewer than 4, yellow is fewer than 2.) (Also in the interim, California's 9-12 Physics CST has been discontinued and NGSS is being adopted. To wit, the unit on heat and thermo is no longer part of our first-year physics class.)

Email ThisBlogThis!Share to TwitterShare to FacebookShare to Pinterest
Labels: Book of Phyz

Here are a few shots that I got while hosting ExploratoRio 2014 on April 9. More photos should be coming soon. This is but a start.

Posted by Dean Baird at 3:03 AM No comments:

We didn't have AP Physics B this past year. Enrollment sign-ups were insufficient for the school to run the course.

Recently-revealed evidence suggests that the dearth of sign-ups might have been related to the grading practices followed by colleagues who teach AP Biology, AP Chemistry, and AP Environmental Science. The case was laid out in a previous post.

Students have now signed up for their Fall classes. I have been informed that there is sufficient enrollment for the school to run both new AP Physics courses: AP Physics1 and AP Physics 2, in addition to three sections of Physics.

It's the "nightmare" I hoped for: three different courses to prepare ("three preps" as we say in the faculty lounge). AP Physics 1 and AP Physics 2 are brand-new, never-been-taught courses, so it'll be like seating thread-forming screws. To make matters worse, I intend to redesign our Physics course, aligning it more closely to Next Generation Science Standards and to our adopted textbook.

Here is the conclusion of this year's ExploratoRio time lapse series. We see the 90-minute exhibition and the 60-minute striking of the set. In the end, the classroom has returned to its original state and is ready to go for the next day.

Posted by Dean Baird at 3:00 PM No comments:

To be a bit different in this year's time lapse, I toured the camera around the room before setting it back on its perch. I also took it outside and into the dark room. A white balance (set to the fluorescent light of the classroom) penalty was exacted.

Earlier, I relearned the lesson that my wide-angle lens is, in fact, a manual focus lens. And easily jarred when the camera is moved, the battery is changed, and the memory card tinkered with. Life goes on.

Here's today's clip. ExploratoRio 2014 had been going for three hours by the time this clip began rolling. So we see things through to the end of the daytime portion.

We had 12 elementary classes come to visit, so that's about 12 x 30 = 360 little ExploratoRions. I hope to see them again as students a few years from now.

Posted by Dean Baird at 3:00 PM No comments:

Posted by Dean Baird at 8:45 PM No comments:

Some high-speed video from NSTA 2014 Boston

The 2014 NSTA conference was held last week in Boston. A few clips of high-speed video were made available to us, so we present them here.

Frisbee Dogs
There was a session on using Frisbee-catching dogs in the physics curriculum. Some ask "Why?" The answer is that there are people out there who love physics and love dogs, so they brought their passions together. In any case, they also brought a dog to the Boston Event and Convention Center.

There were too many demos in the 90-minute show for anyone to capture them all. And not all of them lent themselves to high-speed video.

Ping Pong Bazooka
We'll begin with a clip that reveals challenges to the demonstrators and to the videographer. The Ping pong bazooka is now well-known among high-end physics demonstration professionals. But it can be finicky, and it doesn't always perform well under, uhm, pressure. The camera being used is a Panasonic Lumix DMC FZ200. It's capable of high-speed capture at 240 fps (VGA) and 120 fps (HD). The camera also sports a telezoom lens whose focal length can be extended to the equivalent of a 600 mm lens with an aperture of f/2.8. While the lens features image stabilization, going to full zoom challenges the IS system.

---
Ping Pong Explosion
We move on to the Ping Pong Explosion. A plastic waste can has a bit of water at its bottom. A small, empty, plastic soda bottle is partially filled with some liquid nitrogen then capped tight. The bottle is tossed into the can and immediately covered in hundreds of Ping Pong balls. This part needs to be executed with some haste. The liquid nitrogen boils as the liquid turns to gas. But the gas requires much more volume. And that volume is not available in the small soda bottle. So this happens:

---
Liquid Nitrogen Cloudburst
In out final high-speed clip, we see what happens when a cooler of liquid nitrogen is doused with a bucket of water.

Posted by Dean Baird at 9:29 AM No comments: