The Newtonian Shot in high-speed

Two dart guns are fired straight downward at the same time. But the darts have been modified. One dart has a cork ball attached. The other has a steel ball attached. Which one hits first?

In class, we engage in a guided think-pair-share discussion. The guiding document can be found here:

I generally get good arguments for the light dart hitting first and for a tie. I'm lucky to have such engaged students!

Only after all arguments have been expressed and represented do I proceed with the demo. In class, I shoot the darts from guns suspended from a support bar structure attached to a ceiling I-beem.

For high-speed video goodness, I shot the pair outside in the blazing late afternoon light in sunny Sacramento.

You might reasonable worry about finding the type of spring-loaded dart gun that works for this demo. You need a hard stick dart—Nerf darts or soft rubber darts simply won't do. They seemed to be available everywhere when I was a kid. But safety worries and lawsuits made them an endangered species. Fortunately Arbor Scientific is able to get them.

A light bending exercise... in space!

He does a nice job explaining the optics. This is a water blob floating in the zero-g environment of the International Space Station. But to spice things up, the blob was injected with air.

But don't forget to take a moment to appreciate the grooviness!
Posted by Dean Baird at 9:48 PM No comments:

Rolling in the Higgs

Go ahead: click "Play." It's better than you think it's going to be. Better, in my humble opinion, than a certain well-received LHC Rap, though scholars may disagree.

Baby I have a theory to be told
The standard model used to discover our quantum world
SU(3), U(1), SU(2)'s our gauge
Make a transform and the equations shouldn't change

In this screencast, Paul Hewitt shows a simple solution to a classic problem involving the motion of a bee that flies to-and-fro between approaching bikes.

When a very hot metal ball is placed in near-boiling water, an enveloping layer of water vapor surrounds the ball. This insulates the ball, preventing it from cooling down by conduction to the cooler water. The heat transfer is relatively slow. Bubbles peel off from the submerged ball (single file) while the ball cools. Eventually, the ball cools to a point at which it can no longer maintain its vapor "atmosphere."

The new research shows that if the metal ball is coated with nanoparticles, the bubble production from the submerged ball eventually drops to zero.

Here's the video from researchers at Northwestern.


Boiling Water Without Bubbles from Northwestern News on Vimeo.

Scientific American: How to Boil Water without Bubbles

Popularizers did their best to popularize this mildly esoteric finding.
New Scientist: Water-repellent balls make liquid boil with no bubbles

Geekosystem seems to have taken things too far.
Posted by Dean Baird at 9:48 AM No comments:

And that's how we alliterate here at The Blog of Phyz. But I digress.

The Blue Morpho butterfly and the scarab beetle derive iridescent color from the manner in which light interacts with their structure on a microscopic scale. The beetle even circularly polarizes reflected light.

But the Pollia condensata blueberry outshines them both. Literally. This poison fruit is so shiny it looks like it's made of metal.

The Smithsonian has a nice story about it.

As does Huffington Post.
Posted by Dean Baird at 7:15 AM No comments:

Hewitt-Drew-It! Force Vectors on an Incline

In this screencast, Paul Hewitt analyzes forces acting on a block on an inclined plane, leading to forces on a block sliding on a curved surface.

Hewitt-Drew-It! Force Vectors on an Incline

The results have been posted from the Spring 2012 administration of the battery of STAR tests. These included the End of Course California Standards Tests in the sciences, including Physics. Which is to say I've got something to talk about. 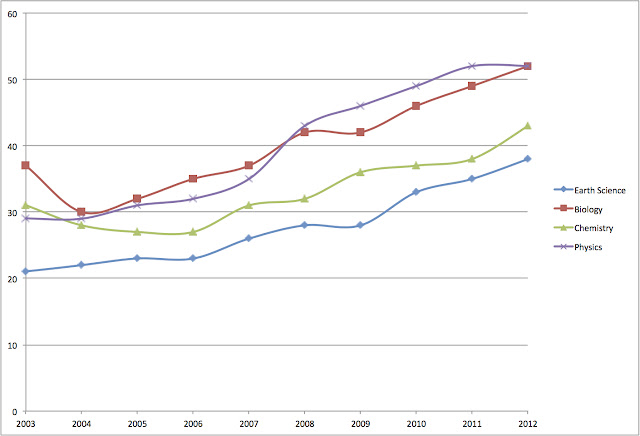 Physics has been on top for several years. But this year's 52% Advanced and Proficient rate matches last years best-in-class performance. Biology's steady gains continued this year, and they have matched Physics' 52% ADV+PRO mark. Objectively, Biology's feat is more impressive since there are so many more Biology test-takers. The tie for 1st leaves Chemistry in its long-held third place rank. But Chemistry saw its biggest single-year jump ever: from 38% to 43% ADV+PRO. Although Earth Science remains fourth of 4, it, too enjoyed a nice upward performance bump.

Rio Physics/Baird: My largest ADV+PRO army despite losses in every standard set
My Physics results are mixed, although this seems to be the norm.

1. Good news: 63 of my 96 students performed at the Advanced or Proficient level. 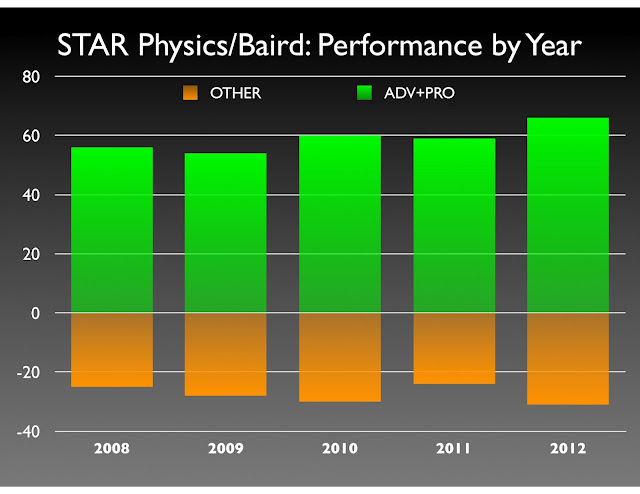 The school has produced bigger Physics ADV+PRO armies in the past (when we had two physics teachers), but I've never contributed as many as 63 to that army. 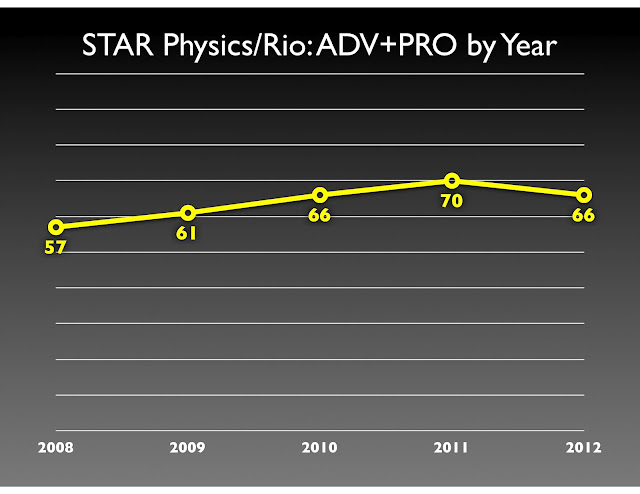 We dropped from 70% to 66%. District schools, Bella Vista and Mira Loma, both posted better rates. But Rio did beat the average district performance, as well we should.

3. Good news: I've never had so many students perform at the Advanced level. 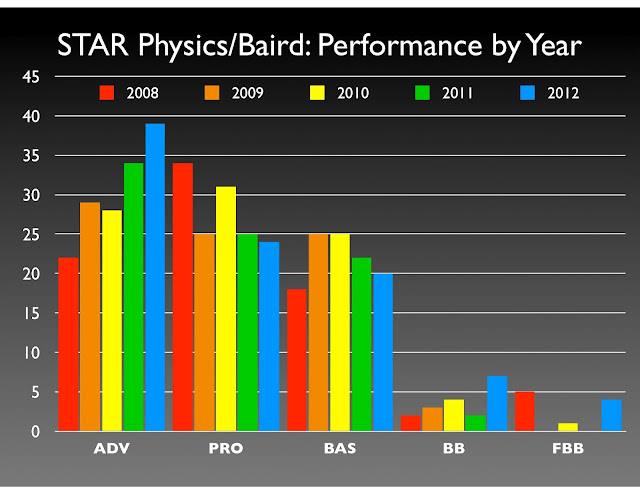 Thirty-nine is a Baird Phyz Record.Those thirty-nine now reside in my in-class Phyz Hall of Fame on my illustrious Wall of Ego. Unfortunately, 7 in BB represents new records, too. 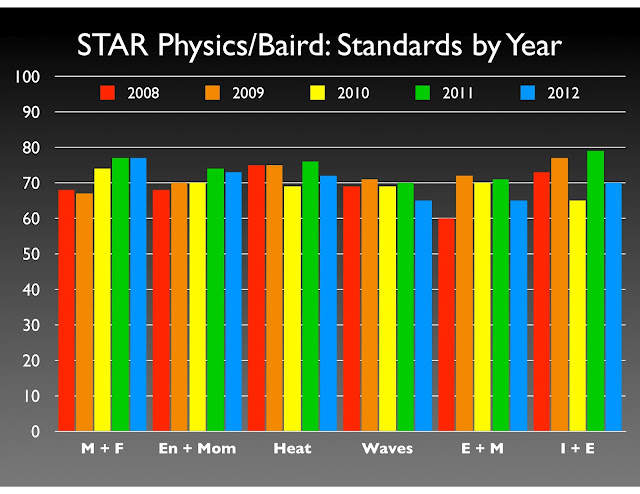 The scene brightens slightly if you compare the 2012 performance to 2010. But why would you do that?
Posted by Dean Baird at 1:16 PM 2 comments: