Submitted for your Halloween approval. Complete with creepy soundtrack.

Hat tip to Huffington Post.
Posted by Dean Baird at 9:29 AM No comments:

When I began authoring Keynote presentations in the early 2000's, I went with the slide resolution/size of 800x600 pixels. VGA was 640x480, and who would ever need more resolution than could be shown on a TV screen? I figured I was future-proofing by dialing the resolution up a notch to SVGA, knowing full well that the resulting documents would have larger file sizes.

As fortune would have it, things change. I noticed that the interactive QuickTime files I created from my Keynote presos looked a little chunky when projected digitally. Keynote uprezzes presos to match the projector's capabilities pretty well, but QuickTime isn't as clever. (Neither was I for not knowing that.)

Last year, I began transforming my 800x600 presos to 1680x1050 (WXSGA+). The new aspect is a better match to the MacBook Pro's own display (no black bars). Keynote does its best to scale everything up. But with animations and grouped objects, it doesn't always work out. So tweaking has to be done. Sometimes, the tweaking is nontrivial.

I launched a raft of updates into the momentum unit. And into the UCM/gravity unit before that, and into the Newton's laws and motion units, too. I tag the links with an "HD" when I remember to. If you've been using the old presos, feel free to grab the new versions. The files are bigger, but the added resolution is worth the wait!
Posted by Dean Baird at 8:31 AM No comments:

Email ThisBlogThis!Share to TwitterShare to FacebookShare to Pinterest
Labels: Book of Phyz, presentations

Complete details can be found at the NCNAAPT website.

Some quick highlights:
· UC Berkeley Physics demo show Friday night.
· Noted "climate skeptic," Richard Muller, speaks Saturday morning on his course/book, "Physics For Future Presidents."
Check out the rest of the program on this PDF, and schedule your travel plans accordingly.
Posted by Dean Baird at 6:02 AM No comments:

Email ThisBlogThis!Share to TwitterShare to FacebookShare to Pinterest
Labels: NCNAAPT

I am late to this post, but within the calendar month of the news. I'm slow! But many of these items I post so I can easily find them later.

In any event, here's the fairly undramatic photo: 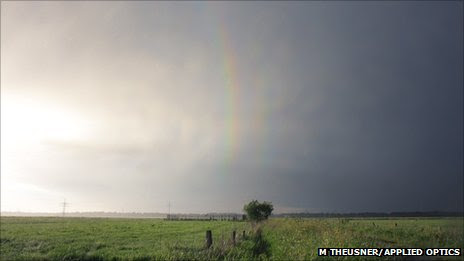 MSNBC's story at the end of this link explains why the photo doesn't knock your socks off. The BBC's take is here.

One thing to notice, the camera is aimed sunward.

Among the things we learn: the primary rainbow shows up at about 40°-42° around the anti-solar direction, and the secondary is out at 51°-53°. We look away from the sun to see such rainbows.

The geometry of the tertiary rainbow places it 38°-43° from the solar direction. The quaternary rainbow is similarly sunward.

Images of the tertiary and quaternary rainbows are reminiscent of the discovery of the outermost planets. Photographers aim their cameras to where the faint rainbows should be, Without seeing the rainbows with their own eyes, they shoot the images nonetheless. They then post-process the hell out of the images, beefing up contrast and saturation. And voila! Third/fourth order rainbows are revealed.
Posted by Dean Baird at 5:29 AM No comments:

I'm done with Motion and Forces

And I'm already behind.

We hit 36 days of instruction this week. And we finished our unit on UCM & Gravity this week. It would appear that I'm right on schedule.

So only 28 days should have been devoted to Motion and Forces. I should already be deep into Standard Set 2: Conservation of Energy and Momentum.

As it is, I teach California's 9-12 Physics Standards across a 180-day schedule rather than the artificially-imposed 140-day schedule.

Even at my relatively slow pace, I get the sense that I'm out in front of many physics teachers. We tend to be big fans of Motion and Forces. Many choose to plumb Motion and Forces to depths far beyond what the state of California asks for.

I'm willing to let the state provide guidance on which topics to teach. I am employed by the state to teach physics, so I teach the physics the state asks me to teach.

But I can't bring myself to squeeze all that content into 140 days of a 180-day school year. The STAR testing schedule forces testing to be done in April for the convenience of the Department of Education and their testing contractor. The timetable is artificial and pedagogically meaningless, so I don't adhere to it.
Posted by Dean Baird at 6:16 AM 1 comment:

One of the many consequences of my undiagnosed OCD is a need to keep a web page holding links to the many videos I like to use in class at just the right moment. As more videos come online, I update the page.

I'm not sure I provided a space for all the treasures I found since last October, but it seems I have a distinct need to update the page following PTSOS1 each year. Since PTSOS1 was yesterday, today I offer the updated web video page!

The oldies are all there for your convenience. "New ones" found since last year have been added and tagged appropriately, I hope. Each entry has a thumbnail embedded video. The subsequent title is linked to the source page. (Yes, I'm hot-sourcing, so links may go dead. I recommend you download copies onto your own storage device.) There is also a link to the corresponding Blog of Phyz entry and/or curriculum materials where available.

If you find yourself with time to kill, check these out.

Web Video for the Classroom

There's also more video fun at my page for

Skepticism in the Classroom.

1. Enjoy and
2. Send me links of groovy videos I should have included!
3. Feel free to remind me what videos I posted to the blog but haven't archived on this page.
Posted by Dean Baird at 7:45 PM No comments: