Yes, I do dress up 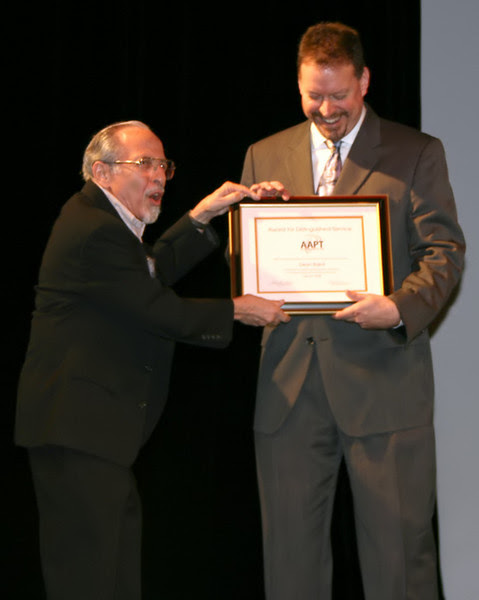 And if you'd like to see me in a suit, tie, and uncomfortable shoes, you'll simply need to
a. get married,
b. die (must...resist..."redundancy with 'a'" comment),
c. give me some kind of high-falutin' award.

At the AAPT national meeting in Edmonton this past summer, my physics-teaching colleagues went with 'c.'

They bestowed me with a Distinguished Service Award. When I looked at the list of national, high-power physics teachers on the past awardees list, I felt a bit out of place. Don't get me wrong. My Montana-sized ego needs constant feeding, and an AAPT DSC is good eatin' for a long time. But I know Dewey Dykstra (for example), and I'm no Dewey Dykstra. Dewey Dykstra (and several others on the list) are among the stars in the constellation by which I steer my ship of curriculum.

It's a great honor and I was certainly humbled enough to dress up for the occasion. I knew if I didn't wash up for the ceremony, Mama Adair would have taken a pound of flesh out of me.

When congratulated by colleagues at the Edmonton meeting, I assured them that you get a card punched every time you attend a national meeting and with the tenth punch, you get an award. The Awards Committee, chaired by Harvey Leff, came up with their own reasons, though. I'll give you the short version here:

"Dean co-authored several conceptual physical science lab manuals and contributed to Paul Hewitt’s Conceptual Physics. He has served on the AAPT High School Examinations Development Committee and developed and evaluated questions for use in AAPT’s Physics Bowl and the Physics Olympiad. Dean has an extensive website that contains, among many other things, his unique textbook, The Book of Phyz."

Thanks to Mary Holbrow for the incriminating photo from the AAPT Edmonton Awards Ceremony.
Posted by Dean Baird at 4:29 PM 1 comment:

Results for the California Standards Tests administered last spring have been tabulated and posted. You can find them at the STAR website.

For a more useful report--one that will show how your students performed in specific content areas--consult your school or district administrators.
Posted by Dean Baird at 9:54 AM No comments:

Galápagos: photos are up 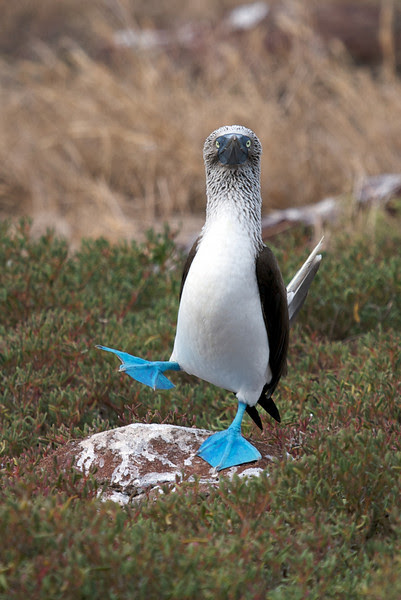 Actually the adventure began in the spring of 2007, when the James Randi Educational Foundation announced The Amazing Adventure 3: The Galápagos. They had chartered a "cruise" through Darwin's archipelago. The ship is Celebrity's Xpedition and holds fewer than 100 guests, so it's not one of those superhotels that floats seven stories high above the water. But it's large for the waters of the Galápagos. I'm nowhere near being able to afford such a cruise, but I could not miss the chance to sail with Randi and dozens of skeptics through the islands that inspired The Origin of Species and the modern notion of natural selection. So I booked passage.

The Amazing Adventure 3 begins and ends in Quito, Ecuador. So flights to and from had to be booked. I did so in September of 2007. Today I was given notification that my flight itinerary had been changed. Usually this means a flight time has been changed by five minutes. But this one involved whole new flights. With a 10-minute layover between flights 2 and 3 of the journey from Sacramento to Quito.

So much for booking a $1000 flight nearly a year in advance. The apologies flowed freely when I called OrbitzTLC. Apologies don't get you from Sacramento to Quito on the day you booked. One helpful suggestion was to fly out of Los Angeles instead of Sacramento. It's all just California when viewed from Bangalore. I wonder how many Detroitians are asked to rebook with departures from NYC. Probably not so many.

After more failure from Orbitz, I suggested they book my flights starting a day in advance (to this point they had been keen to get me in a day late). So that's what I've got now. Though I had meticulously reserved shady window seats (window seats opposite the sun) for all flights, who knows how many middle seats I'll be dealt now?

Orbitz was willing to cut me loose and fend for myself with 5 days to go before a flight booked nearly a year ago. Gutsy operation they run. While on hold, I was able to see what Travelocity had to offer. One seat left on a couple of sweet $2300 fares.

Ultimately, this snafu is American's fault. They must have cancelled my DFW-MIA flight. Hey, now that the flights had to be rebooked, I'll probably get to pay the new baggage fee that I would have been spared if I didn't need to rebook. Excellent.

As it is, I now need to book a hotel for my newly-required overnight in Dallas. Always good to get a chance to pay more out-of-pocket for the privilege of additional inconveniences.

When they screw up the return flights, the result will be missing a second of the first two days of school.
Posted by Dean Baird at 2:22 PM No comments: