High schools in Illinois are doing it; you should, too.

I never thought it was a good idea to have radioactive samples of any kind in a high school lab. There's just no need for it. However, the high school physics teaching community is populated with many individuals who came from nuclear industry or research. Nuclear physics holds a special place in their hearts. So my aversion to radioactive samples seems like a minority view.

I'll lay out a few reasons for my "no nukes" view. Please feel free to add a "pro nukes" viewpoint in the comments. (Or "no nukes" arguments I forgot.)

1. We teach too many topics in high school physics already; nuclear physics can wait.
2. Listening to ticks from a Geiger counter doesn't have a lot of thrill-value.
3. Career-long exposure to the radiation coming from that "hot plate" (the lead-based glaze on that Fiesta ware you got in TJ that one time) cannot be healthy.
4. The California academic content standards in physics certainly do not call for nuclear anything.
5. Whatever coverage is called for by the College Board in terms of the AP Physics B Exam can be covered paper and pencil-style.

So poke around your storage area and round up your sources for hazmat disposal.
Posted by Dean Baird at 2:06 AM 5 comments:

Sturgeon's Law might appear too generous when applied to the web wonder, YouTube. Still, the online video resource does have its moments. Among them, physics and critical-thinking "teachable moments."

Having grown up in the Mac OS, I've become accustomed to easily acquiring anything in my browser window with a click (or at worst a modified click) of the mouse. But the videos on YouTube (and some other sources) exist in Flash Video format. You can't just click a QuickTime pop-up menu and download the clip to your hard drive.

If the video clips stayed at YouTube forever and I had universal, uninterrupted access to the Internet, there would be no problem. But, you know; reality...

So here's what you need to do, fellow OS X users hoping to acquire elusive video content. I admit I'm a complete neophyte at this, so easier/better ways may exist. Enlighten me in the comments.

1. Watch the YouTube (or other enlightening Flash Video) clip on Safari.
2. From Safari's Window menu, select Activity.
3. In the tangle of addresses, find the one URL that's big (MB's instead of KB's) and ends in ".flv."
4. Double-click it right there in the Activity window. This will download the file into your designated download destination.
5. Get iSquint. Open iSquint, and use it to transform the .flv file into a .mp4. You have some options; I don't recommend H.264 unless you've got lots of time to kill and hard drive space to spare.
6. If you want to completely transform the file to QuickTime format, you'll need QuickTime Pro. Open the .mp4 in QuickTime Pro and Save As a ".mov" file. And give it a more descriptive name than what it downloaded with!

Again, this post is for Mac folks only; PC-types can tell me how much easier their process is in the comments. If there is an easier way for OS X, don't keep me in the dark.
Posted by Dean Baird at 12:35 PM 17 comments:

Angel of Carolina! Or not... 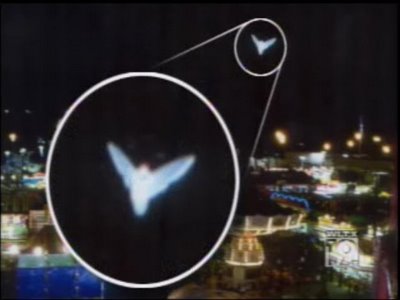 The story of an angel photographed over the South Carolina state fair has been making the rounds. I found it at Bad Astronomy. I promptly made a lesson of it. My students dug right into it. They had even less patience for this story than I did!

The original story from South Carolina is here.

The Bad Astronomy post and about 100 comments are here.

An interesting recreation of the pic can be found at the Xenophilia blog.

As far as the classroom lesson goes, here are a few of the questions I thought to ask after showing the video clip.

1. What was the source of the broadcast: cable news, network news, local TV news, etc.?
Local TV news is never-ending fountain of "too-good-to-verify news." Here in Sacramento, the ABC affiliate, News10, seems to take pride in their extreme credulity. Of course they linked to this story; they seem eager to jump on every wacky story that comes along.

2. Was the story skeptical/critical or accepting/sympathetic toward the photographer?
Once you've seen two stories of this nature, you know how they always play out. It wouldn't even *be* a story if an ounce of skepticism had been applied. So the "reporter" shepherds the story along to make it seem like there's actually a story going on.

3. Who provided the skeptical perspective?
The self-proclaimed believer in angels mentions that not everyone agrees with her assessment. She promptly dismisses the nay-sayers, but she provides the only hint that any kind of alternative interpretation is possible. Let's just say she's no James Randi. Or Michael Shermer. Etc....

4. Are there any inconsistencies between the photo shown and the verbal descriptions of the photo given by the photographer or her son?
Despite the short duration of the piece, there was enough time for a few to slip in. The photographer describes the "angel" as being centered in the middle of the photograph. Her son refers to legs that can be seen. Wha?

5. What's the best explanation for the photo and how could one go about reproducing such an image? Assume *no* manipulation of the photograph (via Photoshop or anything else).
The best I've seen was an argument in favor of a hummingbird. But the moth advocates make strong arguments as well. The illumination of the critter is due to the fact that nearly everyone who points-and-shoots a camera leaves the camera in "auto" mode. The camera meters the dark scene and fires the flash. The critter was in darkness before and after the shot was taken. Thus giving the photographer and her son the sense that the "angel" was invisible to the naked eye when they were at the fair. This "only the camera can see it" phenomenon is a common thread in paranormal flummery.

After the discussion on the true nature of the photo...

6. What's the key difference between moths/hummingbirds on the one hand and angels/fairies on the other?
The fact that moths and hummingbirds actually exist, as The Bad Astronomer says, is something of a clincher!

The guilty party in all such stories is the reporter. The participants might have shown poor critical-thinking skills, but the reporter is the one who exploits these people. Strokes them and encourages them, knowing better all along. But working on a deadline and desperate for a byline.
Posted by Dean Baird at 8:04 PM 5 comments: