In this screencast, Paul extends the block of ice on a ramp to a bead sliding down a wire, to the motion of acrobats Ari, Bari, and their dog Bo.

In this screencast, Paul enlists Nellie Newton to illustrate the work-energy theorem to solve a motion problem.

In this screencast, Paul derives kinetic energy from Newton's second law, and illustrates energy transfers for a block of sliding ice.

Posted by Dean Baird at 9:05 PM No comments:

Here is some info I've scraped together on the Russian meteor.
I'm sure that the numbers will be revised but this will give you a start

The meteor will probably be named Chebarkul after the lake where the largest fragment is believed to have landed.

The biggest meteorite found so far is 7 mm across less than 1/4 inch, it was a chondrite meteorite

Scientists made great progress understanding stony meteoroid impacts with the earth's atmosphere tat the time when comet shoemaker Levy hit Jupiter. Stony meteoroids that are the size of the one in Russia or the even larger Tunguska event very quickly encounter thickening air at high mach number. The physical stress of the atmospheric pressure due to high velocity of the meteoroid causes the meteoroid to fracture. The multiple smaller fragments decellerate more quickly than the entire original object object with accompanying surface heating and continued fracturing into smaller pieces. (These small fragments remain cool in the center while the surface is incandescent.) The breakup deposits a great deal of kinetic energy into a shock wave.

Movies of the scientific modelling of the Tunguska event here
https://share.sandia.gov/news/resources/releases/2007/asteroid.html

and now the same researchers are applying their computer code to the Chebarkul meteoroid
http://www.abqjournal.com/main/2013/02/15/abqnewsseeker/sandia-labs-researcher-mark-boslough-to-model-russian-meteor.html

here is the abstract of the Tunguska event article.
http://www.sciencedirect.com/science/article/pii/S0734743X08001784

Here is an article I co-wrote about another recent near collision
http://www.sfsite.com/fsf/2008/pmpd0810.htm
Posted by Dean Baird at 10:54 AM No comments:

In this screencast, Paul illustrates work and potential energy via a barbell and other vertical lifts, and the energy states of a simple pendulum.

In this screencast, Paul explains two ways that Freddy the Frog slows a horizontally-moving skateboard by vertically falling on it.

The reference sheet that accompanies California's statewide end-of-course physics test has been changed. And I'm not happy about it. Why?

In August, 2003, the California Department of Education (CDE) and Educational Testing Service (ETS) sought to settle on a final form of the Physics Reference Sheet to be included in the California Standards Test (CST) in 9-12 Physics. The CSTs were still relatively new, and the reference sheet used for the 2001—2003 administrations had not been completely ironed out. (I think they were using the reference sheet included on the Physics Bowl Exam, but memory is not always to be relied upon.)

A series of drafts and conference calls ensued. I had been newly appointed to the State Board of Education's Content Review Panel (CRP) for Science and volunteered to take part in the collaboration. There was a representative from CDE, one from ETS, and my CRP colleague, Charles Munger, Jr., and perhaps one or two others in on the process. The debate among the parties was more vigorous than a physics reference sheet might seem to merit. But compromise and consensus prevailed; we settled on a document that CDE and ETS implemented. No further work on the document was ever called for or done.

In 2011, ETS changed the reference sheet. A colleague alerted me to these changes and I placed an inquiry to CDE. I got a response from ETS, the contractor in charge of our CSTs. ETS tells me that these changes were needed to accommodate suggestions from the CRP (which is now the ARP: Assessment Review Panel), and to align the 9-12 Physics reference sheet to the Grade 8 reference sheet.

The details are important, but they're not my primary concern.

I hadn't so much as looked at the reference sheet since 2008, because the matter was settled in 2003. I failed to imagine that while there was no money to continue the Released Test Question process mandated by the STAR test legislation, there was money available to alter the reference sheet. I wouldn't have known about the changes at all if not for an inquiry sent to me by a colleague. (I was incredulous until they included an image.)

As a member of the Assessment Review Panel, I do not recall any suggestion that the reference sheet be modified. I know the ARP never reviewed or approved the modifications.

Having served on the CRP/ARP all these years, I have been made to appreciate the value and importance of the psychometric analysis that is done on the tests and the test items. Psychometric analysis places demands on year-to-year consistency. CRP/ARP suggestions for changes to the test were routinely waved off by ETS/CDE because such changes would break the integrity of the psychometrics.

Altering the reference sheet flies in the face of psychometric integrity. It may be that the CST is so close to sunsetting that psychometrics no longer valued.

So my concern is that changes were made to the CST's Physics Reference Sheet without the involvement of or notice to the Assessment Review Panel. I don't think the reference sheet needed modification in the first place. And given the vigor of the 2003 debate over the original reference sheet, I am troubled that ETS unilaterally modified the sheet based on their perception of implications of ARP feedback on individual test items.

Every change they made was debated and rejected in the August, 2003 reference sheet authoring process. I worry that a new team of individuals came into the process—not knowing the history of contention and consensus that preceded their involvement—and said, "Hey, you know what this thing needs is..."

Amid all those changes, no one could edit the "1 J = 1 N m" to read "1 J = 1 N·m"? With NGSS looming, it's safe to say the CST will run its entire course in anticipation of a notation change that California physics textbooks have yet to make. But I digress.

In sum: Educational Testing Service unilaterally changed a testing document that was originally built through stakeholder consensus. They did so without asking California's Assessment Review Panel for either permission or approval. And they didn't notify the panel or the public that they had done so. So yeah, I'm not happy.
Posted by Dean Baird at 12:00 AM 2 comments:

In this screencast, Paul illustrates momentum conservation with a two-fish system.

Posted by Dean Baird at 4:32 PM No comments:

After watching the non-boiling pot of AP Physics B Redesign for a few years, I decided to look away until something actually happened.

I looked back today, and something appears to have happened. The College Board now has a full-fledged web page with FAQs, PDFs, and even a non-YouTube video.

Here's the preamble:
"Guided by National Research Council and National Science Foundation recommendations, the AP Program spent several years collaborating with master AP teachers and eminent educators from universities and colleges to evaluate and revise the AP Physics B course. This collaboration led to a decision to replace AP Physics B with two new courses, AP Physics 1: Algebra-based and AP Physics 2: Algebra-based. The new courses were endorsed enthusiastically by higher education officials and will benefit all members of the AP community. AP will begin offering the eagerly awaited courses in the 2014–15 academic year, and it will discontinue the AP Physics B program following the 2013–14 academic year."

As I feared, AP Physics 1 is essentially "All Mechanics All The Time" (with a toe-dip into electricity).

AP Physics 2 is "Everything Else".

Given the extent to which AP Physics 1 is a Modeler's Paradise, and the propensity of so many high school physics teachers to dwell in the realm of mechanics, I wonder if a market for AP Physics 2 will ever materialize. And if it does, how long that market will remain viable for the College Board. I foresee many high schools offering AP Physics 1 alongside their traditional physics course—both intended for seniors. There will be no place for AP Physics 2.

I don't see a bright future for AP Physics at my own school. Implementing an AP Physics 1-2 sequence would institute the kind of tracking we've avoided by eschewing any "honors" or "accelerated" science classes. Isolating the best and brightest from the rest of the student population in a first-year course is not the way to go. Our current Physics 1 course is nicely heterogeneous while not "unchallenging" to our top students.

I presume there's been some attempt to align Physics 1 with NGSS as a practical matter. NGSS seems to have left electric circuits out, so it's curious to see them in as the token non-mechanics item in AP Physics 1.

Jump to AP Physics C? We really don't have a sufficient population of phyz-excited students who have also completed AP Calculus AB as sophomores or juniors.

Then again, if AP Physics is abandoned, a year's worth of robust curriculum is also lost. AP Bio, AP Chem, and our new AP Environmental Science will soldier on with one fewer competitor in the market. I can't get excited about such a marginalization of physics.

I'll need some time (and inspiration) to find a path worth following.

In this screencast, Paul shows how Newton's laws lead to the impulse-momentum relationship, which then leads to the conservation of momentum.

Today's lesson came as a bit of a shock

We were studying series circuits, so we made one out of students. The Wimshurst machine played the role of the battery.

The shock? That Isaiah is such a great dancer: that guy can shimmy!

Typically students will shriek with anguish upon the discharge of a millimeter spark from the Wimshurst. Within seconds they ask if they can do it again! The human resistors feel the shock in their wrists, not in their hands. Is that because the wrist is the narrowest point along the path of conduction? I don't know, but it seems reasonable.

While the students settle back into their seats to massage their shocked wrists, I demonstrate the spark-generating power of the Wimshurst machine and am typically able to get a spark to jump several inches. The snap is impressive.

What I don't do is attach metal points to the discharge spheres then offer students automatic A's in the course if they see a spark jump on a subsequent cranking of the machine. Who would ever do such a thing? That's just banana sandwich crazy!
Posted by Dean Baird at 5:40 AM No comments:

Time once again for Scientist Valentines!

I don't have any new ones at the moment. Being in the midst of a manuscript and the ongoing Canvas to Keynote exodus makes additions unlikely. But it's bad that Maxwell is not represented, and I think Mae Jemison deserves a Valentine.

Here's a list of Valentines posts to get you caught up.

My colleague, Dan Burns, recommends printing them out 4 or 9 to a sheet, cutting them out and giving one to each student. They go over better than you'd think! 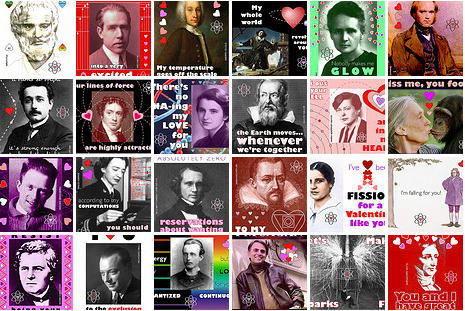 Email ThisBlogThis!Share to TwitterShare to FacebookShare to Pinterest
Labels: valentines

In this screencast, Paul, a former boxer, investigates the physics of riding with a punch, and other situations related to momentum.

I was only able to run my annual Student Opinion of Teacher Survey in my Physics 1 classes (four sections) this year. 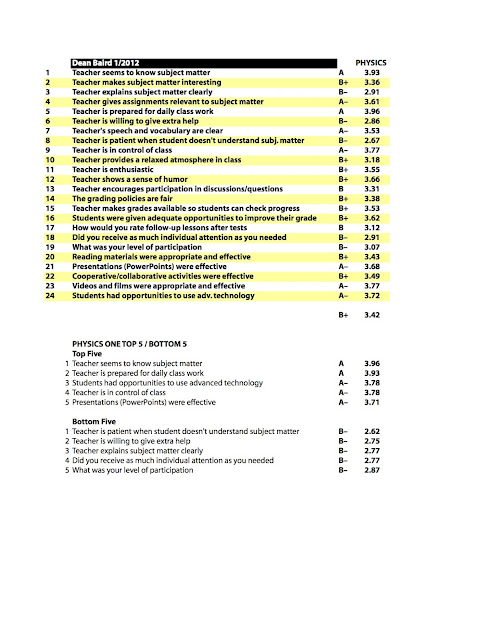 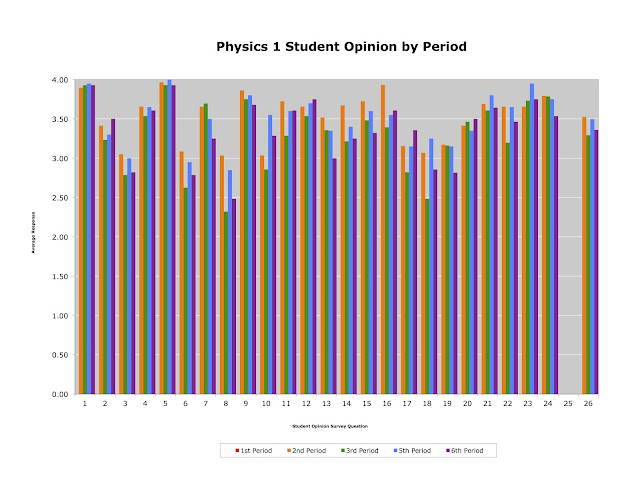