PTSOS: What IS this thing? 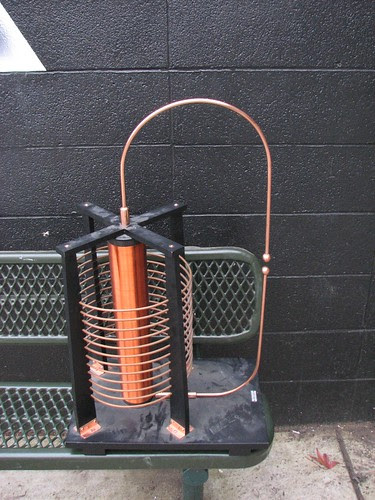 A PTSOSer brought this device in hoping to learn what it was and how to use it. Click the pic to access more pics.

It appears to be a transformer whose inner (secondary?) coil is connected to electrodes who come close to one another. The upper arm can be moved to change the space of the gap.

There are no binding/connecting posts above or below. The underside is clean.

Our collective wisdom, such as it was, suggested connecting an AC source to the outer (primary?) coil via alligator clips or equivalent. That outer coils appears capable of handling many amps.

It has a Welch nameplate (before the merger with Sargent).

Have you seen such a thing? Please advise (in the comments) as to its function and proper setup. (I've added a new post tag: Mr. Equipment—it's like the words "mystery" and "equipment" joined together.)
Posted by Dean Baird at 4:31 PM 4 comments:

Among the many groovy aspects of PTSOS is the sharing among participants. The veterans up front have seen many things, but we haven't seen it all.

While discussing the Bell Labs wave machine, one of the participants at yesterday's PTSOS2 mentioned a Gummi Bear wave machine made with bamboo skewers and tape.

Here's a link to a video of the device. In the UK, they have Jelly Babies rather than Gummi Bears. (They also have G-clamps. Honestly, isn't that a better name than C-clamps?)

Despite the chilly tule fog, a group of physics teachers gathered to discuss the pedagogy of heat and waves at Rio Americano High School yesterday. It was PTSOS2: Give Physics a Whirl.

We ran through kinetic theory, temperature, specific heat, and heat transfer in the morning. Demonstrations were demonstrated, with presentation tips aplenty. Corresponding presos were presented (with my usual admonitions about how bad PowerPoints can be). Lab activities from the Conceptual Physics Lab Manual: Activities · Experiments · Demonstrations · Tech Labs were discussed and summarized.

Specifics included conductometers, radiometers, radiators, Miracle Thaws, and many others. We can never resist the Leidenfrost effect. (A full episode of Jearl Walker's Kinetic Karnival is devoted to this topic.) That led us to busting the paranormal explanation of firewalking. 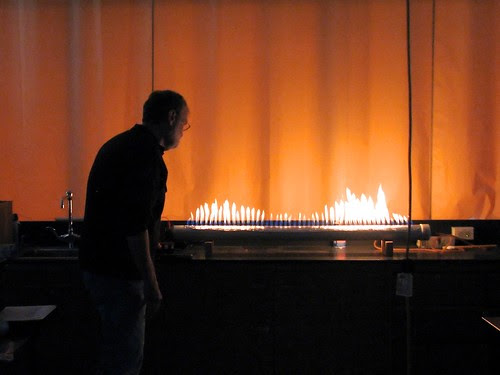 During lunch, we were treated to a surprise visit from the Physics Go Girls (Morgan and Riley), who brought treats. With their chartreuse db-T's, they could have been seen from outer space. 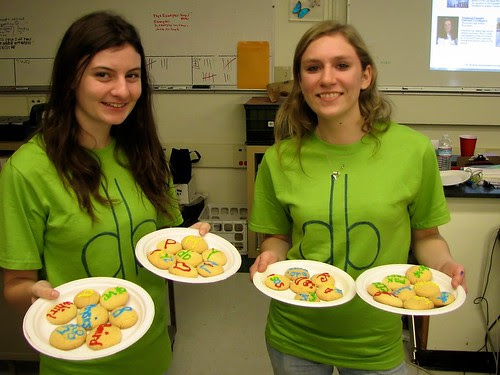 Their customized carbohydrate comestibles were enjoyed by participants and workshop leaders alike.

After lunch, we launched into mechanical waves and sound. We discussed the connection of vibrations to waves (without getting bogged down into the robust details of simple harmonic motion). We delved into the Bell Labs wave machine, a Doppler rocket, PhET sims, WavePort, and others. I really like WavePort for creating and analyzing sounds.

A roommful of Talkie Tapes was too silly to not take a video of.

The fact that some users often mishear the word "fun" led us on a tangent of audio pareidolia. Our visit to Jeff Milner's Backmasking website resulted in laughter (wincing, cringing) of varying degrees of propriety.

Steve piped some heavy gas (the eco-friendly freon replacement) through a song flute (recorder) so we could hear the difference that makes. Much like the Mythbusters Fun with Gas clip.

We ended the day with the real make-n-take: Steve Keith's newest and improved-est version of the ever-popular String Thing. (Here's the Exploratorium's version.) 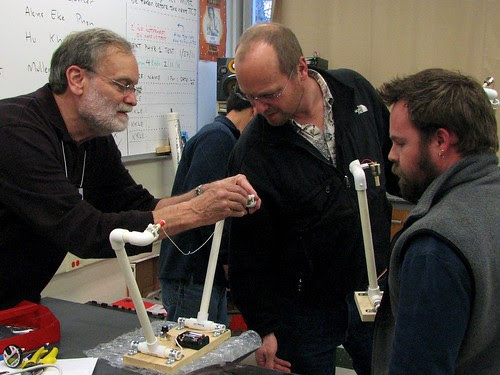 I couldn't resist slowing the finished product down with my compact FH-100.

It was a great day! More photos can be found at my Flickr site.

PTSOS is sponsored by the NCNAAPT and made possible by a grant from the Karl L. Brown Memorial Scholarship fund.
Posted by Dean Baird at 2:10 PM No comments: 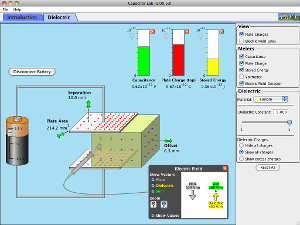 There's a new PhET simulation in town, and it caught my attention.

Actually, there are several new PhET sims available, and I've only had a chance to develop an activity for one of them so far.

The sim is Capacitor Lab, described by the PhET team as follows:

I wrote a quick activity, "'Lectronic Plates,"  that guides a bit of inquiry involving the uniform electric field between parallel plates. Charge density is introduced and explored, too. It only scratches the surface of this sim's potential (!), but it's a start.

I included a link on my Conceptual Physics Lab Manual PhET page, too. I hope to write a more extensive capacitor lesson soon. I'll post it when it's fairly stable.
Posted by Dean Baird at 10:00 AM 1 comment:

Goodwin Liu is worth fighting for: SacBee's Dan Morain

Goodwin Liu (Rio Americano Class of '87) is poised to become Rio's most noteworthy alumnus. After having set the rivers on fire with his brilliance at Rio, he went on to similar triumphs at Stanford, Yale Law, and Oxford (as a Rhodes Scholar).

As a professor at UC Berkeley's Boalt Hall, he continued to shine. And in February of 2010, President Barack Obama appointed Liu to the 9th US Circuit Court of Appeals. Many observers think he's Supreme Court material. I've written about him before.

But Goodwin, like the President, is considered left of center. So his ascendency has sent Senate Republicans running scared. And under rocks. His testimony before the Senate Judiciary Committee was flawless, despite inaccurate and misguided attacks leveled against him by Alabama's Jefferson Beauregard Sessions III and his ilk. Acting Chair Diane Feinstein actually went out of her way to allow conservative Senate Republicans extended time (far past their allotment) to attack Liu. They did their worst, but Goodwin was unrattled.

He was polite, professional, cordial, and humble. Much more so than I could have been under similar circumstances. I watched the entire three hours of testimony and was as proud of Goodwin as I could be. But that was in April.

Though Liu's nomination was approved by the judiciary committee, he was never given an up-or-down vote in the full Senate. Senators can place anonymous holds on nominees, and can threaten filibusters. And that appears to be what conservative Republicans are doing.

Never mind that Liu's ABA rating is a unanimous "well-qualified," a status that eluded Clarence Thomas when he sat for confirmation to the Supreme Court.

On January 5, Rio's Goodwin Liu was renominated. He should be confirmed. If that requires a battle in the Senate, let the fight play out. Goodwin Liu is worth fighting for.

The Sacramento Bee's Dan Morain agrees. But that's just one more note in the steady drumbeat of calls for Liu's confirmation. More can be found at ConfirmGoodwinLiu.com.
Posted by Dean Baird at 7:41 AM No comments:

PTSOS2/Sacramento is one week from today. Workshop 2, "Give Physics a Whirl" focuses on heat, waves, and sound. We discuss ideas, classroom instruction, labs and demos. Valuable goodies are distributed to participants!

Critical thinking, paperwork management, dealing with state assessments, and other topics may sneak in during the day. Computer simulations and video clips, too. Resources are "massively shared!" And participants are likely to build a make-n-take before all is said and done.

The workshop is hosted by Steve Keith and yours truly at Rio Americano High School, Saturday, January 29, 8:30am-4:30pm. Registration includes goodies (apparatus), goodies (treats), and lunch and is attractively priced at FREE! Register with Stephanie Finander at sfinander@sbcglobal.net

PTSOS is sponsored by the Northern California and Nevada section of The American Association of Physics Teachers (NCNAAPT) and made possible by a grant from the Karl L. Brown Memorial Scholarship Fund.
Posted by Dean Baird at 2:56 PM No comments:

I'm in the midst of migrating my photo collections from SmugMug to Flickr. I switched to SmugMug from ClubPhoto years ago. ClubPhoto became kludgier as time went by, and I reached the limit of my patience with them. ClubPhoto went under not long after I jumped ship.

I've been happy with my SmugMug. It allowed me to upload (and others to download) full resolution images. Navigation was always easy. SmugMug was a subscription service; there were no annoying ads for visitors. SmugMug has always been Mac friendly, and added tools that allowed for easy Facebook and Twitter sharing.

Apple has "blessed" Flickr. I use Aperture, and the latest version includes easy publishing to Flickr. This built-in "publication" utility allows for subsequent synchronization of published albums when images are modified or metadata is updated. I understand that iPhoto features a similar built-in utility. 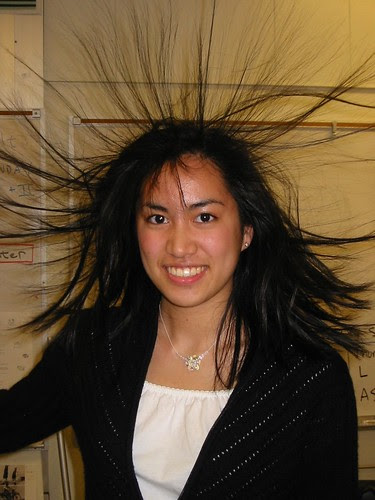 AppleTV accesses Flickr accounts so that one can display images and slideshows on an HDTV via the web.

Why has Apple so blessed the Flickr photosharing service while snubbing all the others? I don't know. Am I happy about it? No. Is it trivial to move thousands of photos from one service to another? Not at all.

I'm dealing with the reality imposed upon me. At the other end of this labor, I'll have online albums that can easily be updated and that can be seen on anyone's HDTV via AppleTV. Most of my extant SmugMug albums are now up. There's still a bit of work to do (especially with Rio Phyz albums), but most things are in place.

The SmugMug albums at phyz.smugmug.com will remain online until my subscription runs out in October. The Flickr albums can be accessed via flickr.com/phyz, but I prefer the "Collections" page as a starting point.
Posted by Dean Baird at 5:36 PM 1 comment:

Email ThisBlogThis!Share to TwitterShare to FacebookShare to Pinterest
Labels: off topic, photography

My friend, Los Gatos physics teacher Dan Burns, created and maintains a collection of "science-y" video clips from The Simpsons (I keep link to the right). Executive producer of The Simpsons, Rob LaZebnik, recently sent a nice note to Dan complimenting him on the collection.

If you haven't perused the clips, you really should check them out. Once you know about them, you'll figure out how to weave them into your curriculum.
Posted by Dean Baird at 12:46 PM No comments: