Sacramento's ABC affiliate followed a few other gullible media outlets in the recent frenzy of JonBenet Ramsey/John Mark Karr overcoverage. KXTV's news division found newsworthy this story of how a "psychic's" sketch drawn on the Leeza Gibbons Show in 1998 "bears striking resemblance" to suspect John Mark Karr. Internet forums were abuzz with comments like "spooky," "that makes me a believer."

In various accounts of this story, so-called psychic Dorothy Allison is given credit for having helped authorities with a manhunt for a serial killer in Colorado. The evidence of her help is notably absent, and research on the specifics of that case are notably devoid of any mention of Allison's help.

The insidious part of such stories is that they credulously fortify the notion that psychics exist and that they have psychic powers. The sad reality is that much like Santa Claus and the Easter Bunny, "real psychics" don't exist. Nor do psychic powers. James Randi is keen to give anyone with such powers one million dollars. So far, the million dollars is safe and sound.

Now that Karr has been found to have no connection with JonBenet Ramsey (outside of his twisted mind), I'll wait quietly for the media outlets that ran with this bogus story to present their retractions.

But I won't hold my breath.

In the meantime, Joe Nickell has written a more enlightened account of this non-story.
Posted by Dean Baird at 5:07 AM No comments:

Beloit College releases an amusing list of "Things your freshmen don't know" every year. It's an attempt to keep againg teachers aware of the world that is familiar to students now entering college. This year's list includes items like, "Google has always been a verb." A previous list included, "The phrase 'you sound like a broken record' has no meaning to them."

In ten years, one item on the list will be, "Pluto has never been a planet."

http://news.yahoo.com/fc/science/astronomy_and_space
Posted by Dean Baird at 7:18 AM No comments:

The first day of school

But not on the first day.

DON'T spend half the period mispronouncing your students' names. It's a time-kill and a first day of school buzz-kill. The students are fairly jazzed about returning to school, and there's a honeymoon going that first day. No need to squander it tripping over all those "tricky" names. You quickly transform yourself into the classroom dunce. It doesn't inspire confidence, doesn't really doesn't serve much of a purpose.

DON'T spend the entire period going over the class rules. What a way to crush the first day. You know those inservice meetings you're required to attend at the beginning of the school year--the ones you have before students show up? You know how they suck the life out of you before you even see your students for the first time. Yeah, it's like that, except now you're doing it to your students.

On the first day, students don't know how your class works. They have no context for your rules. How many classes do you suppose they have where they're NOT expected to be in their seats and ready for class when the tardy bell rings? Do you really need to pound that in on the first day? Let the class operate a little bit, and bring in the rules and policies as they become relevant.

DO cool stuff on the first day of school. Let your students know why your class is the grooviest class on campus. It is! You know that, but they don't know that. Don't keep it a secret. "Tease" them with hints and glimpses of the topics that will be covered during the year. Pose questions that you have no intention of answering until later in the year.

When the end of the first day comes, they should jostle out of your room energetic with anticipation of what your class holds for tomorrow and for the rest of the year. They should be talking to each other about what you presented.

I would hold off on any kind of demo or activity that might intimidate students. That is, hold off on the counter-intuitive stuff. There will be time for that later. You don't need to make them "feel stupid" on the first day. Many are already intimidated being in a class called "physics." Don't scare them off on Day 1.

Have some fun on the first day. Get into your schtick! There will be time to learn the names and discuss the policies. Later. On Day 1, make them eager for Days 2 through 180. It's better for your students and it's better for you.
Posted by Dean Baird at 10:21 PM 1 comment:

I have completed a fairly extensive update to The Book of Phyz online. Changes and corrections made during the past school year are reflected. That translates to many new documents and many more corrected (previously available) documents.

The update applies only to Physics 1. I hope to be able to complete a similar update for AP Physics 2 next year.

Many presentations were added as Zipped QuickTime exports of Keynote files. That means you can play them on your computer, but you can't edit them.

The Book of Phyz is an extensive collection of handouts, demonstrations, labs, worksheets, and other documents organized by topic and posted as PDFs.

Physics teachers are free to use Book of Phyz materials in their classes for instructional purposes.
Posted by Dean Baird at 10:57 PM No comments: 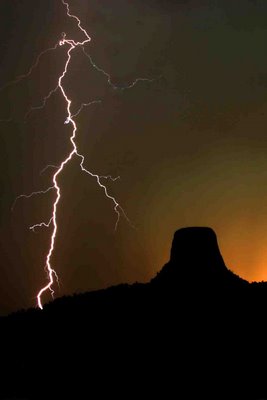 that I'd meet the brother of an old schoolmate whose children were taught by my best friend's wife at an Applebees in Gillette Wyoming? And all because I endeavored to snap this shot of stringy lightning at Devils Tower (60 mi from Gillette) earlier that same day.
Posted by Dean Baird at 10:46 PM No comments: