Challenge: A penetrating puzzle that could spin your mind

Apparently today's theme is "Shooting bullets into things... for science!"

Take a look at this mechanics puzzle, presented in a YouTube video. You'll need to render a prediction to see the outcome.

The solution? You're on your own for that.

They had their reasons.

The impact decelerated the penetrator to the tune of 24,000 gs. Some folks pass out if exposed to 10 gs, and the human body loses structural integrity around 30 gs (300 m/s^2).

In addition to the obvious grooviness, I see introductory physics problems for homework and tests. You?

Why are you spending so much time on kinematics? (The NGSS Edition)

There is a long-standing tradition, in high school physics, of spending the bulk of the first quarter on kinematics. Definitions are slowly pieced together, ticker-tapes are dotted with carbon, motion sensors click away, graphs are drawn, and algebraic expressions are rearranged.

As teachers, we like to assure ourselves of the foundational importance of a deep understanding of position, displacement, speed, velocity, acceleration, and time.

All this is possible without a hint of Newton's laws of motion. One fourth of the school year sneaks past us while we frolic in 16th-century applied mathematics.

At the end of the year, we lament all the topics that we, again, failed to get to. Darn you, state testing! And snow days! Rainbows? Diffraction? Why the sky is blue? Electricity? Magnetism? Optics? Maybe next year.

Have you seen what the Next Generation Science Standards (NGSS) expect of us in terms of kinematics problem-solving?

Approximately nothing. The first thing NGSS wants us to worry about is Newton's Second Law.

So I pose the query of the post title. And I do so not pretending to be someone who will never go off-script in terms of NGSS. NGSS content is significantly narrower than California 9-12 Physics was.

Where we choose to go "off-roading" in physics content is a value judgment. And I will cover the basics of linear motion. The basics. Not the Complete Robust University Mastery Curriculum. I'll be in and out in two weeks tops. Not six.

And I'll cover other, groovier topics not mentioned in NGSS. Some people naysay forays beyond the realm of the FCI as curriculum that's a mile wide and an inch deep. I disagree.

If NGSS needs essentially nothing in terms of kinematics, how can you justify forfeiting up to 25% of your academic year to it? I honestly don't think you can. But I've been wrong before.

Bear in mind my inquiry regards plain old high school physics. Not AP or IB. But please don't be put off by my polemical tone. That's just how I am. If you think I don't know which way is up, feel free to slap me silly with the power of your arguments. I can take it!
Posted by Dean Baird at 12:15 AM 8 comments:

When I arrived at Rio Americano in 1986, the school had a bell schedule I didn't expect.

The block period was generally popular with science and language teachers, and generally unpopular with math teachers. From time to time over the many years of my tenure, the faculty was asked to vote on whether or not to continue the block schedule. The block won every vote. As more votes were held, the block's margin of victory increased.

Then it was decided that all schools in the district would implement "faculty collaboration". Districtwide, all school's would release students early on Thursday; Thursday became the "short day".

So we had to move our blocks to Tuesday and Wednesday. (A vote to discontinue the block was held; again this push failed.)

Then it was discovered that due to the logistics of administering state-mandated tests that are not given to seniors, our schedule fell short of the state-mandated number of instructional minutes. So mid-block breaks were eliminated. That meant six fewer bell-rings on block days, but the other bells rang at the same time.

Next it was decided that if we increased periods by a minute and reduced our mid-morning break, already down to 8 minutes down to 5 minutes), we could legally allow seniors not to attend school during the administration of state-mandated tests they could not take. Otherwise we would need to warehouse them during those hours.

This brought a bit of "pain" to teachers and students every school day of the year, but eased the administrative burden to the school during April's test week. After trying that for a year, teachers voted to abandon it so as to restore the mid-morning break.

But instead of returning to the schedule we used two years ago, it has been decided that we need to do this:

I challenge you to present a crazier, verifiable high school bell schedule.

My verification link: Rio Americano Bell Schedule. (Lest you think I was making this up.)
Posted by Dean Baird at 7:50 PM 4 comments:

Email ThisBlogThis!Share to TwitterShare to FacebookShare to Pinterest
Labels: education, off topic, rant

The data is in for what appears to be the last round of end-of-course content standards tests.

And in science, Physics finishes on top!

While CSTs were first administered in 2001, the California Department of Education uses 2003 for its baseline data.

Here are the year-by-year numbers with trendlines. 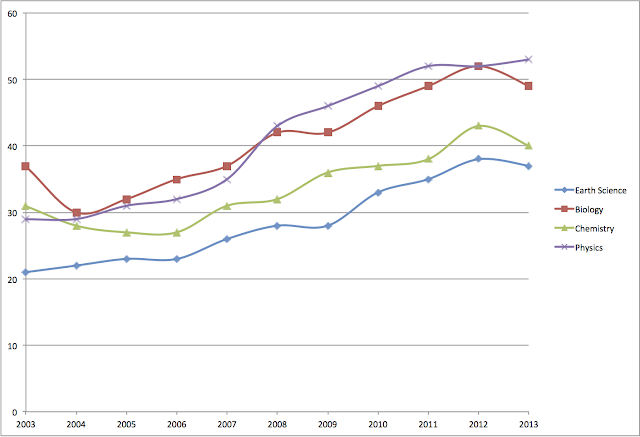 While the other science CSTs were going down, Physics managed to go up!

Are there other ways to analyze the data? Yes. Even to the point that Physics isn't the science winner? Yes. Am I going to elaborate on those? No.

To access your school's 2013 STAR results, start at the 2013 STAR Test Results page. From there, select your county, district, and school. Then click the "View Report" button.

To see district, county, or state results, simply leave deeper fields unspecified.
Posted by Dean Baird at 5:50 AM No comments:

Rio's 2013 Phyz students are best ever

Rio's 2006 Phyz students held the top spot for six years. They scored as 72% Advanced or Proficient in Physics. With the STAR program's End Of Course (EOC) California Standards Tests (CSTs) winding down, this year's classes rose to the challenge. They will go down as Rio's best physics students ever, as measured by the state of California.

The physics students of 2006 had edged out those from 2001 by  single percentage point.

Forty-one percent performed at the Advanced level; 36% came in as Proficient. Seventeen percent were rated Basic, 2% Below Basic, and 3% Far Below Basic. (Due to rounding, this does not add to 100%.)

I'll update this post with graphics and more analysis eventually. For now, I'm going to enjoy the buzz.

And congratulate Rio Phyz 2013 as our best physics students ever!

Click here to see if this takes you to schoolwide results.

UPDATE: As promised, here is a breakdown and some longitudinal context for the 2013 data. 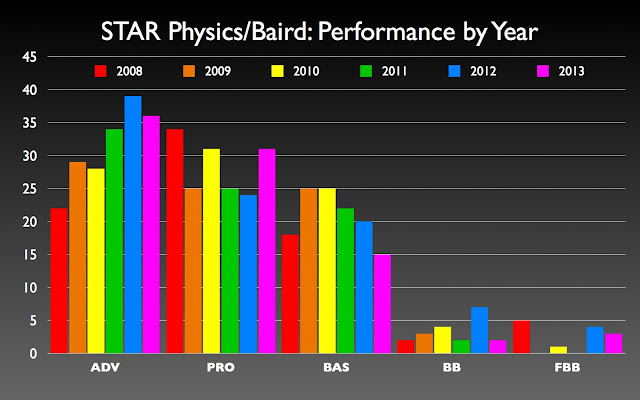 This analysis leaves something to be desired. There's too much data to see larger, more important trends. A more telling chart compares "good" to "bad". That is, the numbers of proficient (or better) students to the number of basic (or below) students. This chart captures the relative proportions and the overall sample sizes from year to year, and is therefor the most useful chart for analysis. 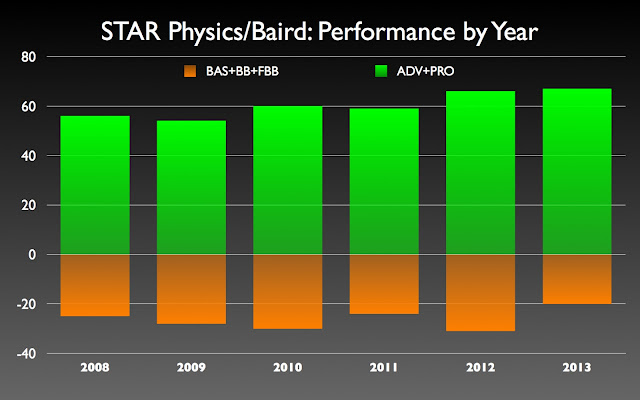 Boiling it down too far yields a simple "horse race" result: what percent of the school's test-takers were either advanced or proficient. You lose sample size data here, so things can be somewhat misleading. 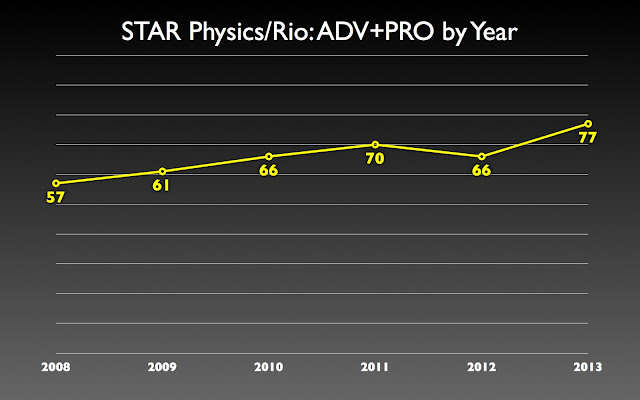 If this chart makes it appear as if 2012 in an anomaly, that's because it was. Rio did not have AP Physics in 2012. We will not have it in 2014, either. But EOC CSTs appear to have run their course, so no worries.

Rio's Physics CST proficiency rate of 77% stands as the highest mark among all the EOC tests. No other CST administered at the school had better results.

Districtwide, our 77% rate places us third among our nine comprehensive high schools. My hat is (again) doffed to Bella Vista and Mira Loma for their physics awesomeness.

Still though, as a school, we end the Physics CST era on the highest note we've ever played.
Posted by Dean Baird at 6:01 PM 3 comments:

Today we welcome six new members to Rio's austere AP Physics Hall of Fame. They are

Congratulations! I'm not sure of the exact extent to which this feat distinguished them from the rest of humanity, but Physics is far from the most popular AP exam, and the air gets mighty thin at the altitude of AP Physics 5-ers. The accomplishment is noteworthy and praiseworthy.

The Rio Phyz Hall of Fame is posted at my Phyz site and stretches back to 1987, when the first of my students sat for the exam.

All Rio's AP Physics B candidates received passing scores of 3 or better this year. Again, this is not a simple matter. I am proud of all my 2013 AP Physics examinees!

Prop 30 budget cut fears wreaked havoc on this spring's final exam schedule. So I don't have a single AP Physics group shot. But here's one with many AP Physics students. More can be found in the 2013 Rio Phyz album at Flickr.