After I wrote the "Down Periscopes" post I bought more PVC, more plastic mirrors and planned to make a few variations of more periscopes. The 4" diameter PVC pipe I used the first time was a bit large and cumbersome for in-class demos if I wanted to use more than one at once so I decided to go with a smaller 1.5" diameter pipe. I had bought scrap plastic mirror from TAP Plastics and planned to cut them down to fit into the smaller PVC pipe since they didn't have pre-cut mirror pieces in a smaller size. My first cuts were too long to be at a 45-degree angle within the right angled ends. Life got in the way for a few weeks and when I went back to it after some home renovations, I hit a construction snag. We had managed to burn through, blow up or break the motor shaft of three different Dremel multi-tools during the remodel. Without a tool to make a clean cut on the plastic mirrors I opted for one inch square glass mirrors I already had in my class room. (I've already admitted to being a hoarder of potential equipment.) My son wanted to help, he thinks all my PVC parts are his building blocks. 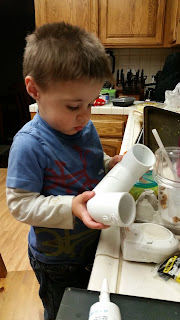 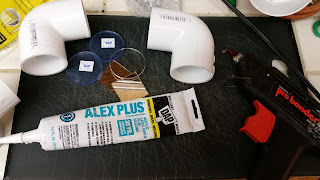 The periscope to be filled with water has a hole in it that fits a rubber stopper. I was surprised how much water the periscope took and you do have to rock the perisope back in forth to move the bubbles around. The periscope has to be filled with enough water to submerge both mirrors. I also quickly found that the hot glue leaked on the "sealed" ends. But the leak was slow enough that I was still able to conduct the experiments initially.

I put a few of my children's toys in the bottom of a bucket with a light directly above me and viewed the toys through each of the periscopes when holding the periscope vertically. I expected the air filled periscope to give a clear image of the toys as with the original, and it did. When I looked through the periscope that allowed water to get into it I could only see the surface of the water in the tube and a vague bit of color.

I expected the water filled periscope to be blurry, and it was, looking about the same as trying to view something under choppy water from above. The pictures were difficult to get with a camera phone as the images in the eyepiece mirrors were quite small. I found that the water level had dropped in the water-filled periscope so that only the bottom mirror was submerged. I had to try holding the periscope horizontally to keep both mirrors submerged in water. I found that the toy could not be directly underneath the mirror and be seen out of the other end.

At first I thought it was refraction, but the medium did not change as the light traveled from the water in the bucket to the water in the periscope. After thinking about it for awhile I realized that although I had planned to hold the periscope horizontally as per the picture below I did not hold it perfectly parallel to the floor. This would account for the apparent shift in position as the mirror was aimed at the toy but not directly above it. Now I'm happy my husband tried to take an "embarrassing" photo of me experimenting in my pajamas. 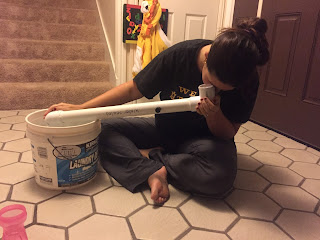 I did recreate the water filled experiment being sure to keep the periscope more horizontal and found the mirror to be nearly right above it. After some trial and error, a better camera and more caulking on the water filled periscope, I was able to get clearer images.

I found that even with caulking on the ends because the clear plastic circle sat on top of the 90-degree elbow instead of inside it as with my other model it was never going to be perfectly sealed. When I presented this at the Fall 2015 NCNAAPT Meeting & Conference at Sacramento State my water-filled periscope leaked quite a bit.

Through that presentation I was able to refine my plan for using these periscopes in class a bit more. Several members enjoyed playing with my periscopes but then asked, "These are great, but what are you going to do with them?"

The air-filled and water-filled periscopes produce about the same image because there is no refraction between the object, mirrors and then your eye. (Consider the small change through the plastic circles to be negligible.) Only in the periscope open to water and air do you see refraction at the water-air boundary that affects the clarity of the image you see.
Posted by Bree Barnett Dreyfuss at 9:41 PM No comments: