Okay, let's take it down a notch. Right down to the crust. Maybe even deeper.

After yesterday's behemoth, this series turned out to be on the brief side, weighing in at a mere 7 pages of content (7 student pages; 7 key pages). But it's core Earth Science...


3.2. Volcanoes. NOVA: Deadliest Volcanoes
I streamed this one from the PBS app on my AppleTV.

3.3. Earthquakes. NOVA: Deadliest Earthquakes
I streamed this one from the PBS app on my AppleTV.

With the prelims out of the way, this series gets straight into it. The atmosphere, weather, storms, and climate. It's only Tuesday, but this is the most ambitious series of the five I've prepared in Earth Science. Fourteen pages of video question goodness. Focus will be maintained!

The hot linked videos (where available) below may or may not be the best versions that currently stream. Video hot-links are highly ephemeral. Use your Google-fu or purchase hard media versions for better results.

Series 2: The Atmosphere, Weather, and Climate.

2.1. The Atmosphere. National Geographic: Our Atmosphere


2.4. Climate. National Geographic: Before the Flood
This one streamed for free for a short period after it was released. It now streams for a fee. In fairness, it is a major production that is very much worth owning.

Here's the Lessons of Phyz link to the question sets on Teachers Pay Teachers:
Series 2: The Atmosphere, Weather, and Climate.

I taught a non-lab science Earth Science course a few years ago. I looked for recent-vintage, high-quality documentaries that might complement the textbook resources.

But as mentioned in other posts, I can never bring myself to show a video presentation cold. There needs to be a support document to help keep students focused on the content. The resulting video question sheets have been added to The Lessons of Phyz at Teachers Pay Teachers.

For this post, I'll try to hot link to the videos that go with each question set. Hot links often go cold as time goes by. If a video streams, one's Google-fu doesn't necessarily need to be strong to locate it.

1.1 About Science. NOVA's The Secrets of the Psychics


1.2 Mapping. NOVA's Lost at Sea: The Search for Longitude


The question sets on TPT can be found at this link:
Earth Science Series 1: Science, Mapping, and Water
Posted by Dean Baird at 6:58 PM No comments:

In AP Physics C students deal with forces in two dimensions, on inclines, acting in circles and more. Inevitably during the unit students will ask the following question in fear:
"Will we ever have to deal with turns on an incline?"

To introduce the concept I delved into the cabinets left to me by my predecessor and found the toys I needed. I raised the whole demo on a wood stand to raise it up. I found a double lane flat track (in yellow) and a banked Hot Wheels track (in orange). Amazingly the Hot Wheels track fit into the inner lane of the flat track. For my first period I used clay and ring stands to hold up straight track to feed cars into each lane. By the next period I added a third straight track to feed one car straight to the wood support, with no turn. By the last period I added color coded signs ... 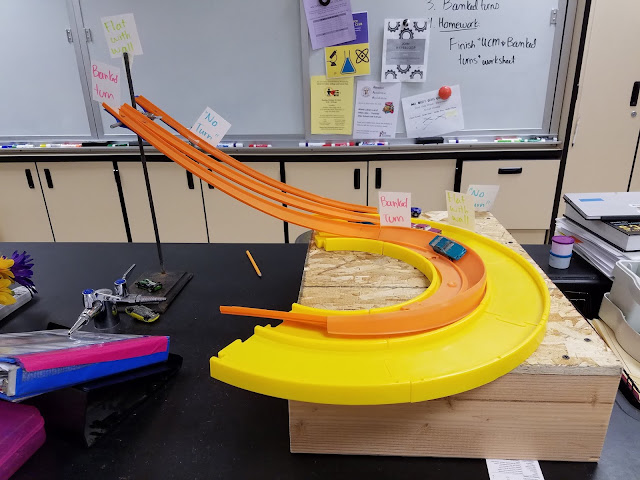 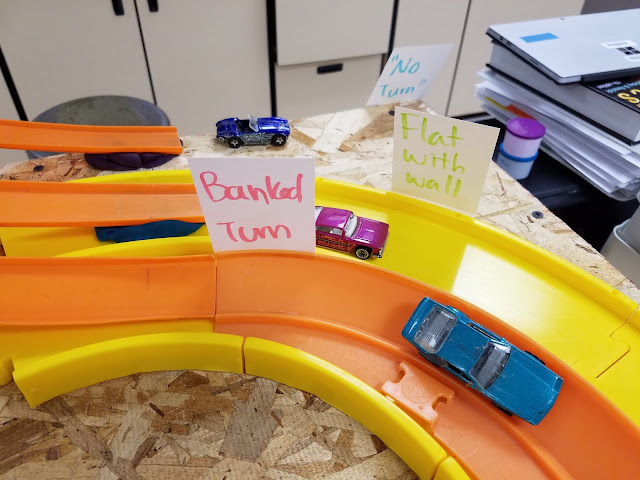 When I demonstrated this for students I ask students what will happen to the car that goes on the "no turn" track. They correctly guess that it will continue straight so I ask why it doesn't turn. It may take a second but they realized, "There was no force to push it into a circle!" 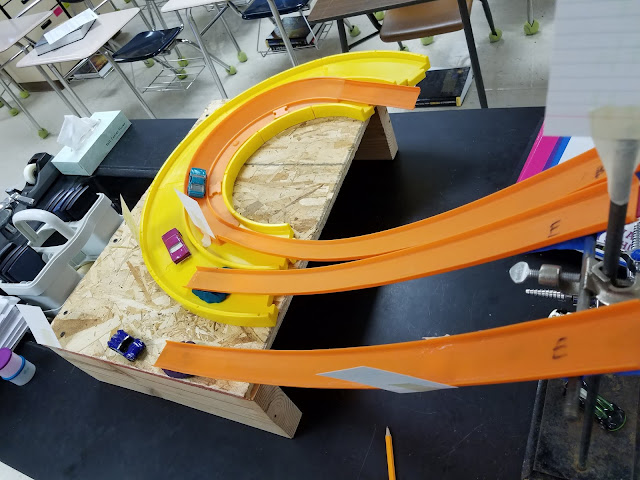 So then we drop the second car down the "flat turn" track and the initial ramp is high enough that the car rides the edge of the track through the whole turn. I ask students which force kept the car going in a circle and they realize that it isn't the force of friction but the force from the wall in this case. We talked about how that wouldn't be good for "real cars" and that instead we prefer a force of friction to keep our cars going around a turn.

The final car goes down the banked turn and while it may briefly touch the wall it doesn't ride the wall like the flat turn. They notice the banked orange track is about as smooth as the flat yellow track so I wasn't sneaky and just adding friction. Then I asked them what force caused the car to go around a circle and they realize its a portion of the normal force.

Here is a video of the three cars being sent down the ramps at the same time:


The radius and coefficient of friction for the two turns are not the same and I did not bother to match the masses of the Hot Wheels cars I grabbed. I did not introduce any quantities for students other than identifying which force was causing the motion. It helped for my students to see the differences in the types of turns and they loved being able to run the cars down the tracks themselves. For a quick set-up it did well to help show my students the differences for each type of turn they were going to work through.
Posted by Bree Barnett Dreyfuss at 3:21 PM No comments: