You know it's possible to use ice to start a fire.

Here's a story of water starting a fire.


UPDATE 1: This space reserved for the first commenter with video showing that they used a bowl of water as a lens to start a fire. Get out there, Mythbusters! I will link to your video clip!

UPDATE 2: Our attempts with a large, hemispherical mixing bowl and black posterboard lead me to doubt the likelihood of this explanation. The dog bowl in the story is a frustrum of a right circular cone, so lensing effects don't seem plausible. One might retreat to a position that the rim of the bowl acted as a mirror. But reflections from a water-glass boundary? The intensity simply isn't there.

In my Mythbusting opinion, the "dog bowl as magnifying glass" explanation holds no water.
Posted by Dean Baird at 7:01 AM 6 comments:

After giving my lesson on atmospheric refraction and mirages last week, I decided that the accompanying preso needed some Warner Brothers cartoon clips of hallucinations posing as mirages. It's a cartoon staple: character crawls through desert and becomes delirious with dehydration, then spots an oasis, makes a run for it and dives straight into... a pile of sand.

Since my web video-fu is such that I can reel in most video that I find useful, I set out to find a Bugs Bunny or Daffy Duck desert mirage oasis dive. My initial attempts did not meet with success.

But I did come across a Road Runner cartoon called "Chaser on the Rocks" wherein Wile E. Coyote dives into a hallucination located directly above a slot canyon.

But it was from the Dark Ages of Warner Brothers cartoons: the mid-60s. Jack Warner closed down the animation studio in 1963, and the cartooning was essentially outsourced. Lower frame rates, canned music (rather than scored music), poor story-writing, poor directing, even poor openings and closings were the hallmarks of this disgraceful era.

No cartoons of this era warranted inclusion in any of the six Golden Collection DVD sets released by WB.

Someone had uploaded what seemed to be the entirety of the Road Runner oeuvre to YouTube. Before it was yanked by Warner Brothers, I clicked through all the episodes I hadn't seen. No doubt my eyeballs turned into spinning spirals as I watched.

Most were forgettable. All the Road Runner cartoons from the Dark Age used the same "theme music," a tiresome, trite twinkle of a tune that's likely to be found in Dick Cheney's Abu Ghraib iPod playlist.

But Episode 28, "Rushing Roulette" had a some usable moments.

Here's a video embed which may not last long. Just remember: it's Road Runner 28 - Rushing Roulette.

And here are some notes for using various vignettes in a physics course. There are moments involving elastic, kinetic, and potential energy, friction and normal force, energy conservation, geometric optics, and lift (helicopter propulsion). A nice mix.

PTSOSer Bill Taylor's students came up with this gem. I drew it and we'll see who (among my students) wins the shiny new Ticonderoga.
Posted by Dean Baird at 7:29 PM 7 comments:

What's wrong with this picture?

Sargent Welch: where are you?

UPDATE 5/11/09: See comments for the detailed explanation from Sargent Welch. The short version: Technical difficulties--please stand by. (Whew!)
UPDATE: Lee T sends word that the site is back up. Gave me a palpitation for a moment there.

Can't tell / Don't know if this is a temporary outage or something worse.

But current attempts to connect to the Sargent Welch website are redirecting to a Network Solutions "domain-holder" page. (By the way, are such pages among the most annoying things you see on teh interwebs?)

Anyone know what's up at Sargent Welch?
Posted by Dean Baird at 3:25 PM 3 comments:

see more Lolcats and funny pictures
Posted by Dean Baird at 1:47 AM No comments:

Email ThisBlogThis!Share to TwitterShare to FacebookShare to Pinterest
Labels: gravity, off topic 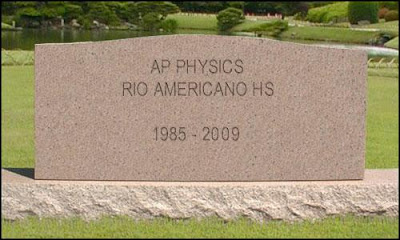 Or perhaps we knew ye all too well. Either way, with a scant 18 sign-ups in AP Physics for the 2009-10 academic year, the school has decided not to run the course. Registered seniors are being encouraged by their counselors to take an equivalent course at American River College, per administrative instructions.

Rio will entertain sign-ups for the 2010-11 school year. If the demand meets the school's student-to-teacher ratio staffing ratio needs, the course will be resurrected. From what I can tell, there would then be no attempt to register students for the 2011-12 academic year; the idea being that we should go with an every other year approach.

UPDATE: It appears Rio's AP Physics has been granted a reprieve. For now. Enrollment is 21-ish by my count.
Posted by Dean Baird at 10:41 AM 7 comments:

I'm a little late on this, but I've been busy! Check the page listed below for the solutions and competition results (as they come in) of

If you don't know what Physics Bowl is, click here.
Posted by Dean Baird at 10:26 PM No comments: