Our plan is to discontinue Physics as it has existed at the school since its inception in the 1960s, and replace it with POTU. We will continue to offer AP Physics 1 and AP Physics 2 (when demand exists). I plan to retire at the end of the 2022-23 school year, so the course will evolve considerably after I'm gone.

Here is a pie-chart representation of the course as it exists, in terms of the unit topics. 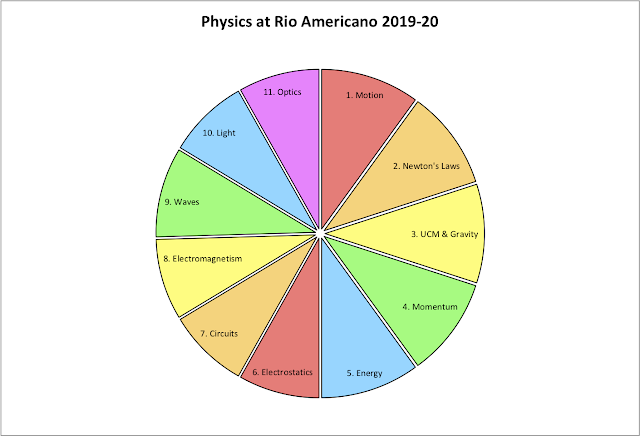 But August of 2021 is coming, so there is a course to create. The POTU Evolution blog posts will chronicle my development process for the benefit of both of my blog readers.

The state of California has developed a framework for the three-course (Biology, Chemistry, Physics) implementation of NGSS. (Feel free to read it real quick. I'll wait.) Physics of the Universe is divided into six segments. 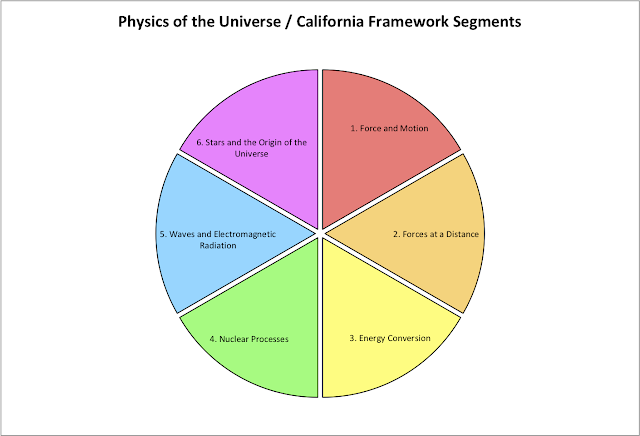 As this course-development project began, my first step was two turn those six segments into twelve units. And I felt I needed to move the nuclear unit. So already, some entropy is working its way into the pie chart. Notice that where I broke one segment into two or three, I maintained color fidelity to the framework's six segments. 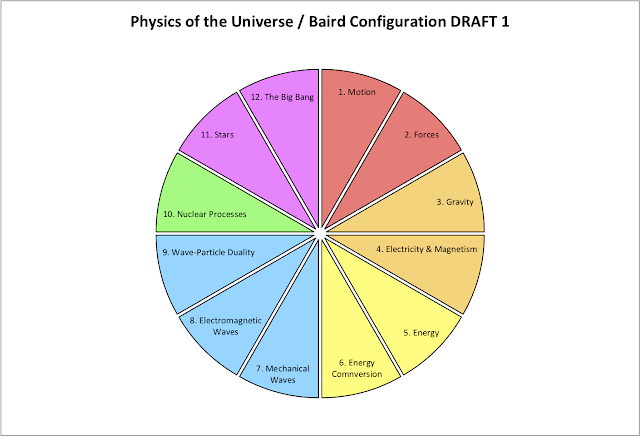 As I read deeper into the framework, it became clear that some subsegments were more equal than others. As I began mapping out a day-to-day schedule, my concept of the course took this shape. It's not even trying to appear appealing anymore. But that's not what's important. There are 180 days to plan, and they're not going to plan themselves. 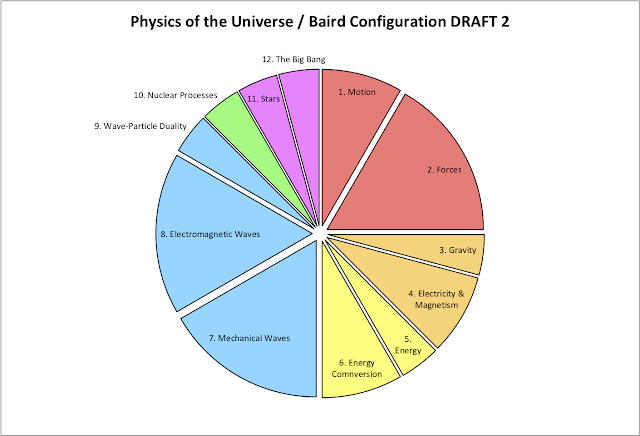 That's probably enough on the planning for now. I'll post unit schedules as I develop them. It's hard to overemphasize how drafty these visions are right now. But they are preliminary drafts at best.

A few additional details: the principal would like our POTU course to be accessible to freshmen. Given that our district is all-in on Integrated Math, any algebra necessary in the course will need to be taught in the course.

We will be adopting textbooks next year for all science courses. Our last adoption in physics was in 2008. POTU textbooks are... largely still in development. I think Conceptual Physical Science would work nicely for NGSS 3-course Physics and Chemistry, but we'll see what the adoption options are in 2020-21.

Thoughts? Ideas? Advice? That's what the comments section is for. I'm keen to hear about what you're doing as NGSS and new assessments appraoch.
Posted by Dean Baird at 5:00 AM