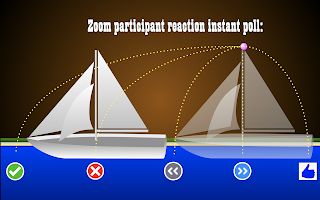 Another classic demo that can elicit excellent classroom discussion. A cannonball is dropped from the mast of a moving boat. Where will the ball land? This nicely confronts our inner Aristotle.

In my version, the premise is laid out, the landing point options are described, and students are asked to produce arguments supporting three of the five possible landing sites: one that they believe, and two they could convince others of (as good attorneys).

A straw poll is conducted (now with Zoom participant reactions), then students are asked to defend their various positions. After the classroom discussion/debate, a final vote is taken.

I warn them to vote carefully. "Physics is a democracy, and whichever outcome gets the most votes will  be correct. The universe will accede to our wishes. Please vote responsibly!"

Then we see the actual outcome. First in my animation; eventually in the classic Project Physics footage from 1968. In face-to-face instruction, I also carry it out using a discontinued Pasco product (Ballistic Cart Accessory with Ball Drop Attachment). So sad to see that combo go.

Lastly, I ask students how the demo could be altered so that the ball would land at the other locations that were offered in the premise. The 1968 footage shows one such modification. I leave it to students to think of the others.

The HTML export from Apple Keynote had a few wee quirks this time. Mostly in that while most of the splash sounds are muted, the audio from the 1968 video (muted in my preso) comes through loud and clear in the export.

Further discussion in the comments.