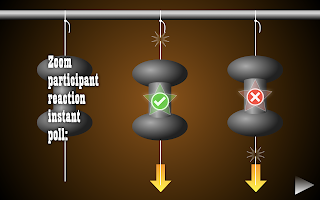 A classic and popular demo. I do it in Conceptual Physics, Physics, and AP Physics 1. And I use a 5-lb dumbbell and kite/packaging cotton string. For years, I used a cast-iron dumbbell. But I broke floor tiles on occasion, and there was that one time the wheel-like nature of the dumbbell ends allowed it to roll onto a student's open ... toes. So I found rubberized hexagonal-end dumbbells. And I use a cardboard catch-box with scrap paper to protect the tiles.

After posing the initial question: Which string will break when the bottom string is pulled, I have them work through some leading questions.

Instead of having students predict which string will break, I have them request a string for me to break. Once they understand this paradigm shift, they request the bottom string. And I oblige. Eventually I break the top string, too. This can be navigated in the preso, alone. But I prefer to do the demo in my empty classroom because I can.

The efficacy of this demo lies in the dependence of the outcome on the presenter's technique. If it were a 50-50 coin flip each time, the demo would not have any pedagogical value. Some ponderables are offered post-demo, too.

As is a continuing theme in my RT;DLs, the student sheet is a Google Doc and the preso is an Apple Keynote preso, exported to HTML. These exports work delightfully on computers. Not so well on tablets or phones.

This one takes a bit of practice to navigate.