RT;DL Blowout: A tour through the equations of motion 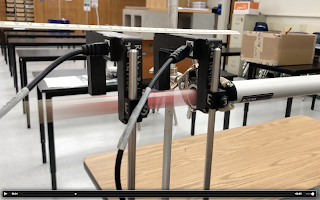 Near the close of the last century, I wrote an article for The Physics Teacher extolling the unadvertised virtues of Pasco's Lenz's Law Demonstration tube.

Sure, you could use it to demonstrate Lenz's law, but that fine aluminum tube seemed pricey, so I was keen to justify the expense. You can tap it with a mallet (or on the ground) while holding it at various places to produce different notes. The Q of aluminum is great for this. You can stand it up on its end in your classroom to demonstrate unstable equilibrium.

But for my notion of classroom theatrics, the best unintended use for the tube was as a blowgun.

In any case, I blow a marker pen through the tube and arrange two photogates near the muzzle to help determine the exit speed. It's over 60 mph!

Once the exit speed is determined, we figure out the acceleration of the marker while it was in the tube. Over 20 g's.

We also figure out how long it took the marker to exit the tube once its motion began. Then we investigate where the marker was when it was at the half way point (in time) along its journey through the tube.

The preso is enhanced with photos and high-speed videos. And an instructive(?) blooper at the end.

HTML Student Lesson Companion: Demo - Blowout [Instead of worked out solutions, "Show that..." prompts are provided.]