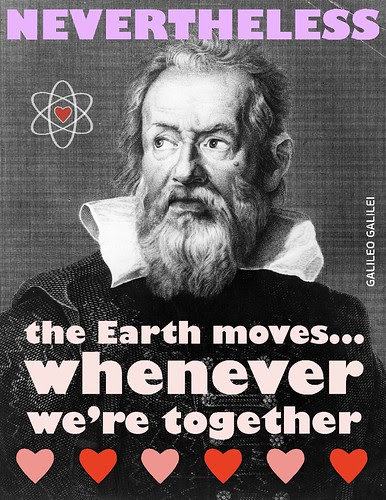 The idea is genius, and my mind spun with ideas for more. (The creativity is more of a curse than a blessing, I say with as much false modesty as I can muster. Still though, important errands and tasks languished while I set these ideas to electronic realities.)

I've posted a baker's dozen, and hope to add more. I don't have David Friedman's artistic skills, so mine simply exploit images found via Google Image Search. I did try to find portraits made when the scientist was in his prime, rather than the more more prevalent "venerable sage" renderings. After that, I fiddled and fussed over each valentine in my favorite obsolete graphics program, Canvas. The heart surrounded by a planetary-model atom graphic seemed like a good idea. Then I exported them as JPEGs, imported them in Aperture, added captions, and published the set as a collection on Flickr.

Featured scientists (so far) are Bohr, Celsius, Curie, Darwin, Galileo, Heisenberg, Kelvin, Newton, Ohm, Pauli, Sagan, Tesla, and Volta. For the physics-ly uninitiated, I included a brief explanation of each valentine. There's nothing that helps a joke kill so much as taking the time to explain why it's funny.

As a mark of highest flattery, I used a few specific scientist/slogan combos from the original Ironic Sans post. But I added a bunch of my own. I still have a few in the hopper, and there are countless more to be had, conjured by minds cleverer than my own.

Feel free to print and distribute them to appropriately deserving geeks. And I encourage you to develop the similar ideas that spring to your mind. Or leave your ideas in the comments so others might develop them.

There's still plenty of low-lying fruit here. Aristotle: "My natural place is by your side." Copernicus: "My world revolves around you!" Heinrich Hertz: "You and I are on the same wavelength." Charles Coulomb: "I get a charge out of you." William Gilbert: "You've got a magnetic personality."
Posted by Dean Baird at 7:34 AM

Kepler - I love your eccentricities.

Newton - Apple of my eye

Farraday - You're cagey but I love you

Fujita - Your love blows me away

Richter - My knees tremble in your beauty

Hmmm. I was thinking
Kepler: You bring harmony to my worlds. ("Spheres might ring more authentic, but that evokes ... another term for such things ... one we don't use in high school.)

Faraday: Invisible lines of attraction draw me nearer to you.

Maxwell: We won't need equations to unify our forces!

Planck: Energy may be quantized, but my love for you is continuous.

Einstein: Our love has the power to bend light.

You're the Bard Baird!

Regarding your Kepler reference - I'm assuming ORBS are also verboten.

Tesla - I'll spark with you anytime

Helmholtz - You bring energy to any relationship

Taking nothing away from Grace Hopper, the term “bug” was already well established engineering jargon before her team found a moth in their computer. (That’s why they thought finding a physical “bug” was funny enough to tape it into the log.)

For example, in 1878, Thomas Edison wrote:
“It has been just so in all of my inventions. The first step is an intuition, and comes with a burst, then difficulties arise—this thing gives out and [it is] then that 'Bugs' — as such little faults and difficulties are called—show themselves and months of intense watching, study and labor are requisite before commercial success or failure is certainly reached.

Historical credit doesn't always land where it should, or in magnitudes proportional to actual contributions.

Newton's first law was the work of Galileo (and had been stated by the Chinese over a thousand years prior to the publication of The Principia); Apple's GUI was the work of Xerox, Copernicus is remembered for Aristarchus' heliocentrism, Columbus discovered the New World, etc.

Anyway, the historical clarification IS appreciated!