I have administered a student opinion of teacher survey at the end of first semester nearly each year I've taught. Initially the survey was an item-by-item duplicate of the survey used at Ann Arbor Huron High when I did my student teaching there. I modified it a few years ago.

The current form can be found here. Students are told of the form at the beginning of the final exam period and asked to complete the survey after turning the final in. They are also told that I will not look at them until final grades have been submitted.

Here's how I did on the first half among Physics 1 students. (Click to embiggen.) 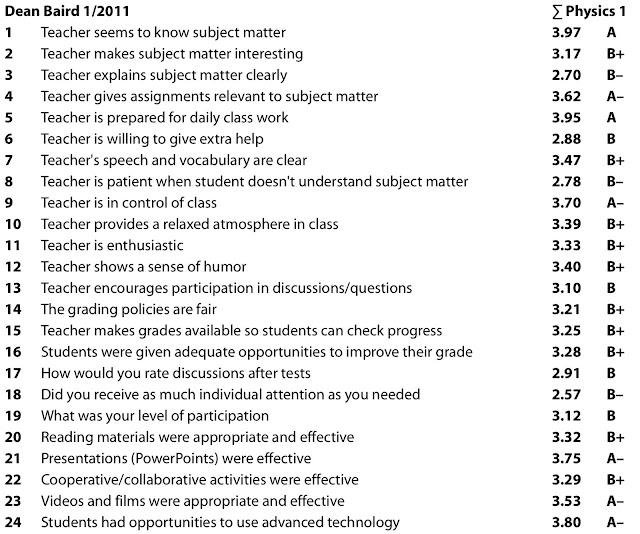 Of course, it's more fun to look at a graphical representation (or two).

Here's a period by period comparison among the Physics 1 classes. There is no question 25; column 26 shows the average for each period. (Click to embiggen.) 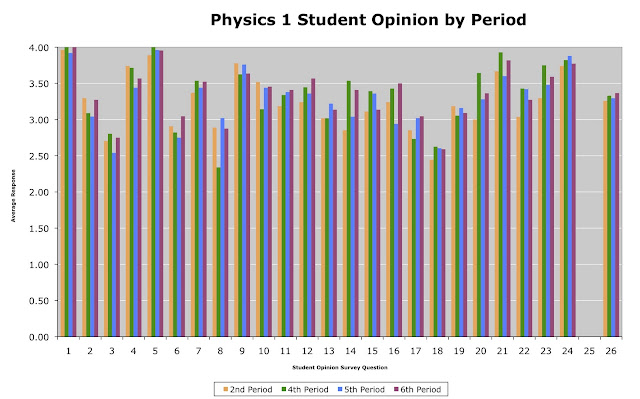 Here's a comparison between the opinion in Physics 1 and AP Physics. (Click to embiggen.) 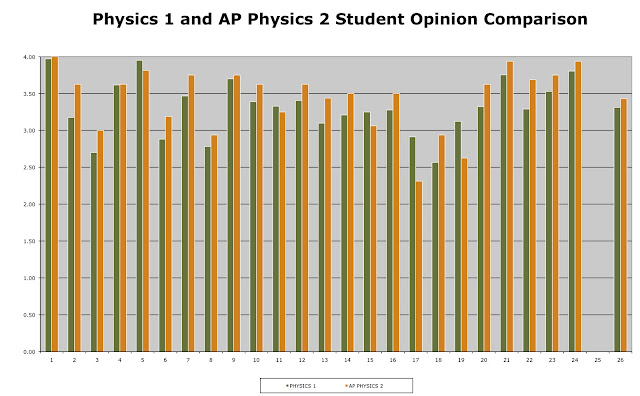 Here's a run-down of my Top-5 and Bottom-5 scores. (Click to embiggen.)

One's instinct is to defend against the perceived attacks represented by the low-scoring statements. But I can't be too unhappy overall. My lowest-averaging item comes in well above the midpoint grade of 2.0.

I would ask that gentle readers resist any temptation to judge too harshly, especially if they are teachers who have never administered such a survey. I would encourage colleagues to run such a survey in their own classes. The results may be better than you expect; perhaps better than you would grade yourself. I do recommend running it only at the end of first semester.

All tolled, I tend to hover somewhere around 3.27 (B+). This year's score was higher, so I'll enjoy a smile for a while behind that.
Posted by Dean Baird at 7:25 AM

Props to you for some impressive marks. I just did a similar survey, but it's all open ended questions. I like the idea of having something so quantifiable.