RT;DL The Tower of Bottle

In the pre-blog, pre-social media days of the mid-1990s, when the World Wide Web was Alien-birthing from nothing (1994) to everything (1995), I was involved with the Southern California Alliance of Mentors for Physics Instruction and its Southern California Area Modern Physics Institute. Yes, two SCAMPIs in one. John Jewett (Cal Poly Pomona) and Roger Nanes (CSU Fullerton) outdid themselves on the acronyms!

Somebody at the California Department of Education liked what SCAMPI was doing, and wanted to get four Northern California teachers involved. I was chosen/selected to be one of them. Jessica Downing, then the Science Department at Esparto High School (now IB coordinator at Inderkum/Natomas) was selected as well. She and I conducted SCAMPI workshops throughout Northern California during those years.

I got this demo idea from her. 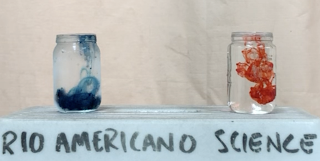 But while we're here, let's add some value. Lay a playing card on top of the hot water and flip the bottle over. The card stays in place and the water doesn't spill.

Set the bottle mouth down on the cold bottle and remove the card. The result is surprising.

Then re-insert the (a) card and flip the configuration over so that the cold water's on the top. Remove the card. And it's a different outcome.

Last, a few questions of balance or imbalance. If you were nervous that I wouldn't shoehorn a Zoom participant reaction poll in, ease your worried mind.

Single-shot video of the complete demo