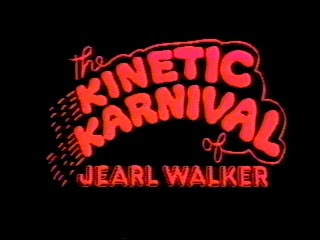 All six 30-minute episodes of Jearl Walker's classic television series, the Emmy-winning Kinetic Karnival, are available online at Walker's MySpace page. I recommend watching them before showing them in class, although I'm sure you'd do that anyway. There are a few brief moments that sensitive educators might find objectionable. Most of us find ways to work around such trivialities, but it's always best to be aware.

Here's a one-stop collection of Kinetic Karnival links for your convenience.

1. Forces and Collisions [impact time and contact area]
In this episode, Jearl proves his virility and masculinity by chopping concrete bricks with his bare hands and volunteering as the meat for a “nail sandwich.”
Video Stream - Question Set - Key

2. Rotation [circular motion and conservation of angular momentum]
I show this one in two distinct segments (one in my Physics 1 course, the other in AP Physics 2). The first third is devoted to circular motion. The second two-thirds is devoted to angular momentum. Do I dislike the blending of these distinct topics? Yes. Do I have the talent and ability to produce my own series? Not so much. In any case, this episode features Jearl in a swim suit!
Video Stream
Video Question Set 1 (UCM) - Clothoid Loop (short preso) - Key
Video Question Set 2 (Angular Momentum) - Key

3. Fluid Flow and Friction
In this episode, Jearl debunks the drain swirl myth from the bathtub, describes an early dating disaster, explains the tablecloth trick, and hangs a spoon from his nose.
Video Stream - Question Set - Key

5. The Leidenfrost Effect [heat transfer and phase change]
Arguably the best program of the series, though it does contain a "politically-incorrect/racially insensitive" moment. When Jearl complains about "the problem" with iron-cooked crepes, you might find the mute button on the remote control of your playback system. A few moments of mute will spare you an apologetic discussion afterward. Features the hand into molten lead, liquid nitrogen in the mouth, and firewalking.
Video Stream - Question Set - Key

6. The Science of Cooking
Jearl prepares a meal for a dinner date with a young lady. Along the way, he describes the physics and chemistry of a variety of dishes. And the date turns out as you might expect.
Video Stream
Posted by Dean Baird at 6:47 AM

That's great i was searching for these topics thank u so much for posting them in detail.

Pretty cool man. In 1980 when I was at WTC (Snyder Texas)I found my brain loving computer programming. Even the math was fun. I found a printed copy of "On The Electrodynamics of moving bodies". I read it over and over; and could not understand a single idea. Then, in '85 I got my BS from Texas Tech(Lubbock)(btw: minored in math).and in 2000 got my MSE in software engineering from UT (Austin). I've done well in my computer career but ya know what I love now at 53yo? Physics. Had I been aware, l could have met Feynman. KD