I find myself repeating "Longer time, smaller force," throughout my momentum unit. There are so many examples of safety devices that decrease the force one might experience by increasing the time. Bike helmets, car bumpers, crumple zones, air bags, seat belts, etc. All decrease the force experienced by increasing the time of the collision. The sticking point is always that the impulse is the same regardless. Many of my students incorrectly think that by increasing the time they have somehow managed to decrease the impulse. I remind them that the vehicle is going from 60 mph to 0 mph whether they use their brakes or hit a wall. They also seem to struggle with applying this concept to larger objects .... And what's larger than a jumbo jet?

Awhile back I caught a news segment about an airplane crash in which an Engineered Material Arresting System (EMAS) safely stopped a plane. Apparently pilots overshoot the runway sometimes and, well, its hard to stop something as big as a jumbo jet. This Popular Mechanics article gives a good background: "EMAS is essentially a rectangular bed of 2,000 to 4,000 collapsible cubes glued in place at the end of a runway, nearly level with the ground. As a plane careens into the cubes, the cubes break apart. Friction between the cubes and the plane's wheels ultimately slows the plane to a stop." The article continues to say "The system can safely stop a Boeing 737 traveling at 65 miles per hour in fewer than 300 feet."

Oooh, that sounds like a Physics problem! All you need is the average mass of the airplane and students could calculate the size of the force that EMAS applies to stop the plane. According to the FAA Fact Sheet for EMAS all runways need an extra 1000 feet past the end of the runway for emergencies. I would be careful that students don't confuse stopping "slowly" through 1000 feet with airplanes that often crash roughly at the end of a rough, unmaintained dirt patch that happens to be 1000 feet long. The point of the EMAS is stop in a short distance in a long time, compared to stopping quickly by say hitting a wall or a long rough distance over a long time. 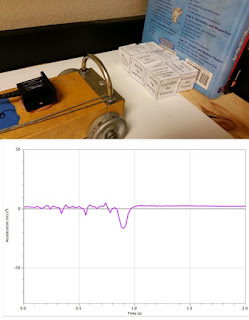 Since there are many different possible stopping situations solving problems about this with students should be accompanied by simple diagrams, maybe even descriptions for each. If  you don't want to get into practice problems you can at least show students pictures and videos of airplanes stopping with EMAS.

I plan to bring up this material in my Crash Cushions project (original post here, additional information about leveling here). In my initial tests of the project a few years ago I found that small paper cubes were the most successful in minimizing the force, a similar design to EMAS!
Bringing in real-life examples that students can evaluate and analyze can help them improve their designs which is an aspect of the NGSS Science & Engineering Practices.


An explanatory video from the company:

Posted by Bree Barnett Dreyfuss at 8:37 AM