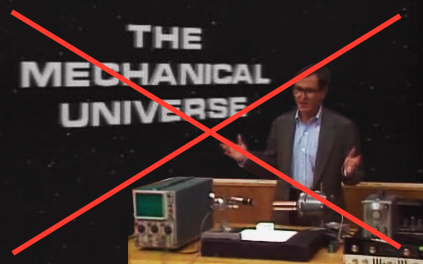 We just learned from the Southern California section of the American Association of Physics Teachers that The Mechanical Universe will soon be disappearing from Learner.org. As of June 30, 2016, the series will no longer be available for purchase and will no longer be streamed (video on demand).

If you don't own your own copy, the series will cease to exist in a little more than a month and well ahead of the beginning of the 2016-17 academic year. The reasons are detailed in the SCAAPT article linked above.

The Mechanical Universe was produced in the 1980s at Caltech by a team led by physics professor, David Goodstein.  Each of the 52 half-hour episodes focused on a specific topic from the introductory college physics curriculum. Episodes featured high production values consistent with Caltech's proximity to The Entertainment Capital of the World.

The series was fairly exhaustive (outside of fluids, perhaps), and featured state-of-the-art computer animations. It followed closely on the heals of Carl Sagan's Cosmos, and it shares some video used in that iconic series.

Some critics would scoff at The Mechanical Universe's increasing age: 1985 was a long time ago. Others would scoff at the mere fact that the series engages in content exposition (unapologetically). I don't mind exposition from time to time (especially as review). And if an equally well-produced, thorough, and encyclopedic series with a fresher production date exists, please let me know about it.

A collection of expurgated versions of this college television course were "edited specifically for use in the high school curriculum." These were known collectively as the High School Adaptation. I do not have specific knowledge of their fate, but I expect it to align with that of the original series.

I have used high school and college versions of many episodes throughout my career, and would hate to be without them. I have developed sets of questions for students to answer while watching those episodes. Without distribution I fear the series will fade into the mists of history, as Goodstein might say.

The full set (52 episodes) is available for purchase for $200 via the Mechanical Universe page at Learner.org. The clock is ticking.
Posted by Dean Baird at 2:32 AM