Now you can't help but introduce this demo by playing that Miley Cyrus song. ;) 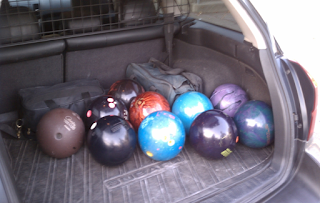 Years ago I wrote an overly professional letter begging for a single bowling ball from my local bowling alley. [Always play the poor teacher card, because you are, in fact, a poor teacher.] They called soon after and asked if I wanted a dozen or so. I never refuse free stuff if there is even a remote chance that I will use it later so yes, I took them all. Transporting fifteen of them led to one of my favorite questions about inertia based on this picture: "Which way did this car last turn? Explain your answer."

In my last classroom I was able to drill into the supporting I-beam in the ceiling and insert a large threaded rod, with Loctite and several locking nuts. I cut a piece of plywood to be the same size as that ceiling tile, with a hole in it at just the right spot. This prevents the threaded rod from moving side to side while the pendulum swung. The plywood is placed on top of the ceiling tile so the ceiling looks uniform from beneath. An inconspicuous eye hook is all that you can see from the ceiling when everything is placed. The support should easily hold 200 pounds so it also hangs a punching bag during my momentum unit.

In my current English-room-turned-science-room this set-up wasn't going to work. For one I'm probably moving again next year so I try not to make too many holes. The ceiling is also not as strong. About half the room has a dropped ceiling covering duct work, the other half has exposed beams in terrible strategic positions and wood slats across the rest. I thought I was destined to go back to the videos I used to use before I realized there was a support beam outside my classroom. 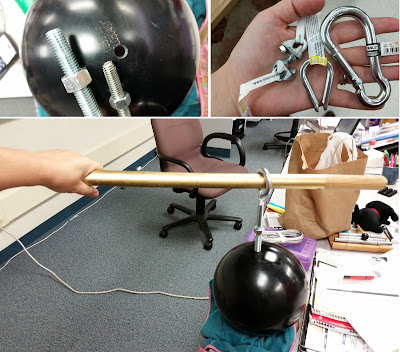 Since I was in a new room, making a new set-up, I decided to make a new pendulum ball. I had shared a bowling ball pendulum made by another teacher, so I decided to make my own. I drilled the biggest hole I could using our drill press at school but it wasn't quite big enough for the eye hook I wanted to use so I had to take a rat tail file to it. In retrospect, as can be seen to scale with the bowling ball, it might be a bit big. I filled the hole with two-part epoxy and used an extra 6' dowel I had around to tighten it with the help of a student and an aid. Simple machines work kids. ;) We tightened it until we heard a small crack. The crack filled with epoxy and set quickly. A few hours after it cured I tried swinging the bowling ball around, trying to start and stop it quickly to test the connection at high forces. 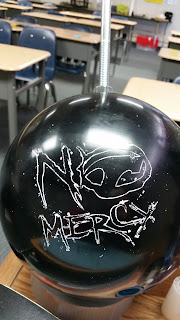 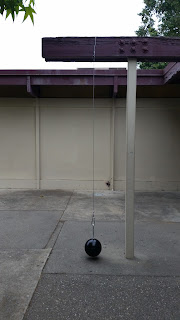 The hardware in the upper right attached to 1/8" steel cable to make
the pendulum. Given the arrangement of my outside beam I have to be able to loop the steel cable around it. When we did the demo everything stayed together! The only hiccup was getting paint flecks from the peeling paint on the wood support beams in my mouth.