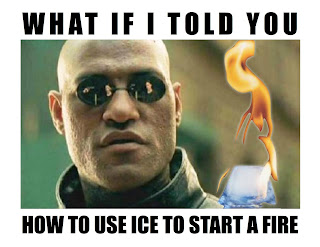 It's that time of year again. The counselors are headed out to register students for next year's classes. Sometime late in May, section counts will be determined and before school is out (fingers crossed), a master schedule will be unveiled.

If you want more students to enroll in physics next year, you might consider advertising your physics course offerings right now.

To that end, I post a series of fliers around campus. Over the years, it's actually become a few series of fliers. I'll post each series below as examples. Some you can probably use as is. One will absolutely not work for you.

Series 1: Physics: You Don't Want to Miss It (The Original Series)

Series 2: Physics: You Don't Want to Miss It (French and Spanish)

I print Series 1 and 2 to fluorescent, coated (not dyed) "neon" paper. It's as optically bright as it is hard to come by. Here's the Amazon link I used last time I bought the stuff.

Series 3: Slogan meets Google Translate  [I'm confessing that I went too far with this series.] 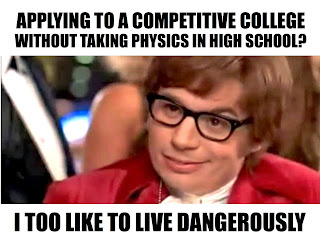 Dank Memes are fun to generate, but can easily go terribly wrong—use extreme caution if you intend to create your own. Many of the templates are fraught even when they're blank. Remember: Physics is easy; poorly executed attempts at comedy can cost you your job.

The Groupie Shots? You'll need to get your own. Mine will not work for you: sone kind of union contract issue, I think.

If you've got posters that you decorate your school with during course selection season, tell us about them in the comments.
Posted by Dean Baird at 12:01 AM