Since I'm in a new-to-me room that was once an English room, I keep running into equipment pitfalls. For my electrostatics unit I realized that I needed a safe space to set up my Van de Graaff machine. All my tables and desks have metal legs and edges but I have one built in wooden desk. It was very close to my class phone, clock, LCD projector and laptop so I was concerned. I reached out to the PTSOS listserv and it was suggested that I build Faraday cages to protect my electronic equipment from the static charge produced by the machine. 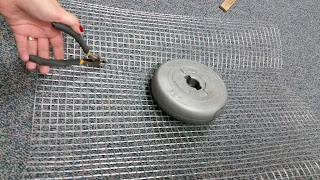 I thought it was brilliant and happily popped over to my local hardware store to purchase a few rolls of 1/2" grid pet fencing. I used diagonal cutters and cut a piece large enough to fold the edges down and make a five sided box to cover my projector and laptop. I have a few suggestions for safety though, if you decide to do this yourself:

1. Wear gloves, a long shirt and pants you don't care about. The sharp cut ends not only snagged my pants but made me look like I had lost a fight with a couple of cats. I was asked for a week what I had done to suffer so much damage.

I decided to test the box by putting my cell phone in it and calling it from my classroom phone. If the Faraday Cage was working properly it would interrupt cell phone reception. I was disappointed that my cell phone rang but realized there was not a bottom to my box. After some research I found that a sheet of aluminum foil underneath it would do the trick. I tried it again and my phone was silent! My Faraday cage was ready. I did have to place a weight on the top since the cage was tweaked a bit. 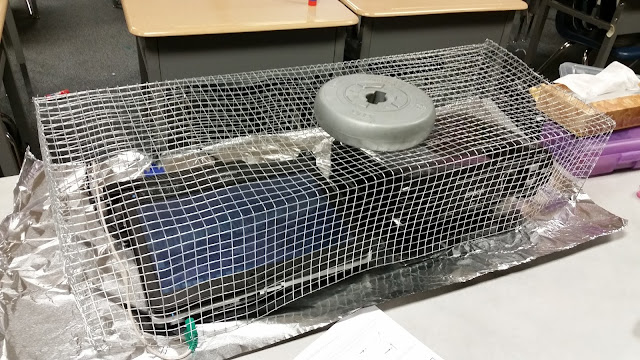 Since my laptop and projector worked reliably during and after the Van de Graaff machine was on I would consider this protective measure a success. I was surprised though when my first class of the day started calling out, "Look at the clock! It's wigging out!" And indeed it was. The clock flashed several wrong times, seemingly without pattern while the Van de Graaff generator was on. I tried to make a smaller Faraday cage for it but there was still some interference because there is not a "bottom" to the Faraday cage since it is mounted directly to the wall.

More Blog of Phyz Faraday cage fun can be found here: Faraday Cage: AM vs. FM.
Posted by Bree Barnett Dreyfuss at 10:24 AM

As story teller Kevin Kling would say, "Scars achieved in battle do not count against contestants."