We have five Nerf-obsessed neighbor boys who regularly have team turf wars across our neighborhood. It is adorable and we always find the small foam darts tucked under bushes and shrubs. My two year old finds them all the time and triumphantly brings them to me (they have a "return" pile set aside). One of our neighbors was playing out front with a two foot white pipe and while I watched he launched a small dart easily 40 feet in the air! Needless to say I was interested, if this was a store made toy I knew what was going on my Christmas list.

I called him over and he was more than happy to show me. He had made it at a birthday party recently; I made a mental note to forgo goody bags the next time one of my kids' had a birthday. His PVC pipe is probably 3/4" diameter and had a balloon duct taped to one of the pipe. He had stuck a straw into a form dart and held it in place with more duct tape. My neighbor's model had camouflage duct tape down the side ("That's to look cool," he told me) and two straight end connectors on each end. He let me give his a go and I determined the end pieces were not necessary. Each time I played with it, ahem, experimented with the dart launcher I was surprised at the height it achieved. 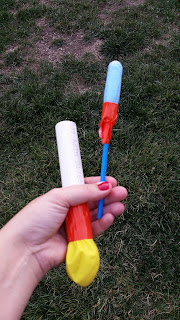 It didn't take long for the dart launcher to catch my daughter's attention and she asked, "Mommy can we make one?" Well who can say no to that? I had already been taking a mental inventory of the PVC I had on hand so we headed to the garage. I sent my kids to find Nerf darts and I found two pieces of PVC that were too short for other projects. By the time they returned with Nerf darts I had procured straws and balloons. I cut the straight necks off the balloons and duct taped them to the ends of the PVC. The foam darts were put on to the straws and taped together. All in all it took me five minutes to build two launchers. 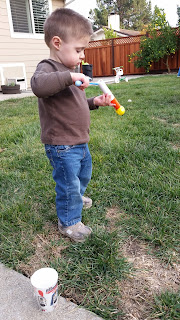 I did vary the launcher for my two year old for safety as seen above and left. His PVC pipe was much shorter and there was not as much give on his balloon. I pulled the balloon farther up onto the pipe so that it could not be pulled back as far. I also used a larger and heavier dart on his straw so that it wouldn't be able to go as far. Of course, he had trouble actually launching it anyway so I shouldn't have been too worried.

My kids and our neighbor that had inspired it all happily ran outside to play with them. Our neighbor found that he could launch his original lighter dart in my son's "toddler safe" launcher just as high as his original. He liked the more compact version for mobile combat and spent the next hour running around the yard with my daughter chasing their darts. You can also launch a foam dart without a straw but it does not go as high as one attached to a straw. I was so impressed with the height of the darts I started thinking about how to use it in my classroom. I know, that probably comes as no surprise. 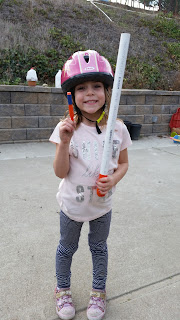 I found a simple plan on a "Frugal Fun 4 Boys" blog that was similar to what we had made. I decided that since the dart launcher has several launching variables I wanted to use it as an engineering activity. I wrote up an activity (remember its a draft format!) that explained how to make the small launcher and outlined an all-class competition. The plan is assign one launch variable to each group: launch angle, balloon pull length, dart weight, straw length, etc. Each group will test the variable for maximum dart range using identical launchers and then report their findings to the rest of the class. Ideally they are also practicing some data collection skills by being careful not to change anything but their assigned variable. The whole class should be able to summarize these findings and determine the best set-up for their dart launcher to achieve maximum dart range. I'm hoping to then test each class' optimum set-up against each other in an all-class competition. I won't be teaching projectiles until the beginning of second semester but I will let you know how it goes!

I plan on purchasing a few of these refill packs so I don't have to diminish our neighborhood ammunition supply.