Using the loosest form of the word, I am the advisor of our high school's AVBotz Robotics Team. These students are self- or peer-taught and exceed the electronics knowledge I can bestow on them in a regular Physics classroom. They have built an autonomous underwater vehicle (AUV) and compete in the International RoboSub competition every summer against universities such as CalTech, Cornell, Penn State, ASU, etc. (Notice I said universities!)

When the sub is being water tested some students are on the deck editing code on their computers at a safe distance from the pool while others are in the water to manipulate the sub and task props. At a recent water test we frequently asked the swimmers what the sub was doing since we couldn't see it in detail from above the water. The poor swimmers had to duck underwater then return up to say "It's heading straight," duck down and up again to say, "Now its dropped a foot," etc. as the sub was going through maneuvers.

It is probably the first time in my life I thought, "I need a periscope."

Although it wasn't the first time I had thought of building one. The Exploratorium's "Square Wheels" book of demonstrations by Don Rathjen and Paul Doherty has a project called "Periscope With A Twist." The instructions explain how to make a PVC periscope you can twist and see how the orientation of the image changes. I knew I would have to modify the design because I wanted to have part of it underwater. As light moves from air to water it refracts or bends because light waves travel more slowly in water. If I had used the original design the mirror I was looking into would give me a view of the water level within the tube but would not allow me to see underwater. I needed to seal the mirror with something transparent at least on the end that would go into the water. I decided sealing both sides would be best so I wouldn't ever accidentally dip the unsealed end in the water.

So I was off to TAP Plastics and got two of my favorite planar mirrors for a few dollars each. I was planning on cutting some transparent scrap to seal off my ends when I found pre-cut circles 4 inches in diameter. It required me to up my PVC pipe size but I found 4 inch solid PVC drainage pipe and two 90 degree elbows to fit. The pipe only came in 10 foot lengths so for awhile I awkwardly maneuvered my son in a shopping cart through Home Depot while holding the pipe vertically. (FYI the fine-toothed hack saw in the molding aisle is the best cutting option if you didn't bring a truck.) The TAP Plastics bill was $10; the pipe was $10 but I have enough for two more periscopes at least and the two elbow joints were less than $7. That makes the total cost of the raw materials to be about $20 per periscope.

I was pleasantly surprised to find that because I had increased the pipe size I did not have to cut the elbow joints to hold the mirrors as in the original plans. The mirrors fit nicely into the pipe and I was able to hot glue them in place (A). The hot glue job is not pretty; it was difficult to glue a rounded corner of a planar mirror to the inside a PVC pipe on a curve when I wedged all four corners in at once (B). But they seem secure! The 4 inch circles fit nicely into the elbows and a bit of hot glue secured them (C). There was not enough hot glue for me to feel that they were waterproof though. I used window caulking around the circles and the ends seem water proof (D). I used PVC glue between the elbows and the straight piece. I added some more window caulking along the straight pipe and elbow seam even though it was glued (E). 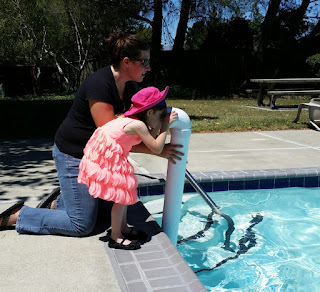 I had a periscope! Of course I had to test it out in a pool and my daughter was happy enough to help me out. As I expected the periscope is very buoyant, it is almost 4 feet of air filled tube after all. If you hold one end in water only one elbow will be submerged; it takes some force to hold more of the periscope under water if you would like to view objects deeper. If I had not been holding the periscope for my daughter it would have risen up too high for her to look through.

I do plan to make another periscope that is not sealed and not glued in place so that I can use it as the original project plans intended. There may also have to be a third one built for my kids; they don't like watching me make toys for school that they don't get to keep. Explaining this periscope alongside an unsealed one will bring up refraction, planar mirrors, image orientation, buoyancy and more!

Posted by Bree Barnett Dreyfuss at 6:00 AM