A giant eyeball… in your classroom!

When we talk about the refraction of light in physics it can seem abstract to students which surprises me since it is everywhere in their daily life. I like to bring up the convex lens of the human eye as an example and despite having a lot of AP Biology and anatomy students, they really haven't put the two concepts together. I model the way the eye works to my class by focusing light from outside our classroom onto a piece of white paper through a convex lens. I usually send a student outside to move around so the rest of the students can see his/her image and darken the room. The comments they make in disbelief are similar year to year: "He's upside down!" or "OMG its moving!" or my personal favorite, "She's in color!"

This year I added my own version of the Exploratorium's eye model exhibit using an old laundry room light. Since it was translucent white already, I masked off all but the top and spray painted it black. The original exhibit has a two foot diameter plastic sphere about the same shape that is clear except for a white colored portion the size of what I left white. 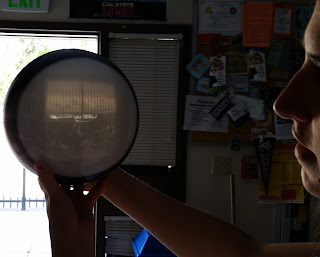 From there I show some basic images of nearsighted and farsighted lenses and discuss how their focal length varies. I ask students to decide if a convex or concave lens would fix them and we discuss how they would adjust the focal length by making it longer or shorter. Its interesting to take a poll of the class and ask who is nearsighted and farsighted; there are more farsighted than nearsighted people and it's rare to have a near-sighted student in class. Before I ask the students though I try to guess if they are nearsighted or farsighted based on the appearance of the eyes. A nearsighted person will have eyes that appear smaller since a concave lens is used to correct it; although it is easier to see if the sides of their face are closer together than the rest of their face when viewed through their glasses. A farsighted person will have eyes that appear larger since a convex lens is used to correct it.

And to bring in your more literary students you can reference the optics mistake in The Lord of the Flies. The character Piggy is described as being nearsighted (myopic) which would require corrective concave lenses. Early in the book Piggy's glasses are used to start a fire, something that could only be done by focusing sunlight from a convex lens. Tell your students to bring that up to their English teachers; it's cross-curricular learning!
Posted by Bree Barnett Dreyfuss at 11:24 AM

And the Optometry Sheet that accompanies the activity.

And a presentation to go with it

Download and unzip. It's an interactive QuickTime. I think I made one mistake in the preso, which I'll leave to you to find.