Among the accepted truths of Watergate is that the Nixon campaign didn't need to do it. He was going to win the 1972 Presidential. There was no need to break into the Democratic National Committee offices; there was no intelligence that a Nixon campaign really needed. Nevertheless, break in they did. And Nixon eventually resigned as a consequence.

At the September 2021 Apple Event (California Streaming), the reality distortion field (RDF) was energized for a slew of new tech offerings. Among them, Apple Watch Series 7. The face of the watch was enlarged by a few pixels. But marketing is marketing. So to illustrate the significance of a few added pixels, Apple presented this image to demonstrate how much more text could be displayed.

The exercise is to show the image to students and have them tell you how Apple fudged this. Clearly, six or so more words appear on the newer model. The watch's screen only went from 44mm to 45mm (diagonal). Why so many more words? 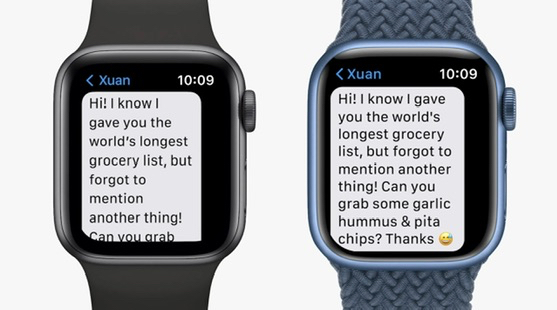 What sorcery is at work here? With any luck, tech-savvy, skeptical teens will be able to knock a few holes in Apple's marketing RDF. Better still if they ever had to write a paper with a minimum page count requirement.

Should Apple have worried that without this dubious marketing exaggeration, Apple Watch sales would plummet, casting doubt on the future profitability of the tech giant?

Given the facts in evidence, motivations and human nature, the Nixon camp still broke into those DNC offices in The Watergate.